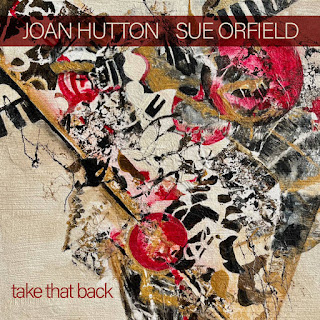 Take That Back is the name of Midwest reed veterans Joan Hutton and Sue Orfield’s riveting new quintet as well as this CD, the group’s bracing debut disc. Joyfully documenting two writers and players deserving much wider recognition, Take That Back is the witty rejoinder to those cynical among us who think all the fun has gone out of jazz. Take that back, indeed!

Joan Hutton, who spends much of her time as an educator, plays jazz with the Swing Sisterhood Big Band, funk with Rare Medium and classical with the Ancia Saxophone Quartet. For the last several years, she has led the Joan Hutton Jazz Project, a forum for her dazzling originals (“Without a Name,” “Weave Poles,” “Slinky”), which deserve far more documentation than they’ve thus far received.

Sue Orfield, who resides in the Chippewa Valley of Wisconsin, has toured nationally with the Seattle-based Tiptons Sax Quartet & Drums and locally with the Jazz Women All Stars and AcoostiHoo. Since 2007, Orfield – who has been marvelously described as a tenor saxophonist “with the whimsy of Sonny Rollins, the passion of Kurt Cobain, the soul of Bill Withers, and the joy of Ella Fitzgerald” – has released five discs as part of the Sue Orfield Band, the latest of which is The Unwitting Man About Town (2020).

To their credit, neither is a quoter or a copy-cat. Hutton is yin to Orfield’s yang. The two first joined forces in late 2019, shortly before the onslaught of the pandemic forced venues to prevent or limit performance opportunities. Unfazed, they began recording a series of videos dubbed “The Kitchen Sessions,” named for the setting: Hutton’s kitchen (later videos were shot outdoors).

Both have a strong presence and clearly enjoy what the other brings to each other’s musicality. Of the two, Hutton is seemingly more cerebral; her compositions flirt with multiple time signatures, as though she were plotting clever short stories that always leave you guessing as to what comes next. Orfield is more playful; one might even say mischievous: it’s in the titles of her songs, their spunky lines and her rousing solos. 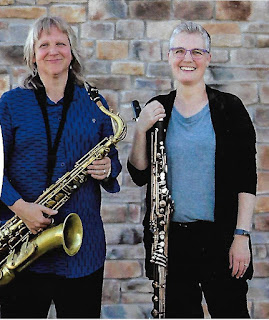 Take That Back is a nicely balanced set alternating in equal measure the two leaders’ attractive and compelling compositions. Joining Hutton and Orfield in the quintet is Ted Godbout, commanding on piano, Kameron Markworth on bass and David Schmalenberger on drums.

The disc’s two best moments are right up front: Hutton’s loping and utterly catchy set opener, “Dirty Secret,” and the sinewy, seductive and snaky Latinate funk of Orfield’s “that it would not hurt you” (featuring a stand-out Godbout solo). Both pieces evince two particularly engaging writers who know how to bring out the best in each other – especially in the harmonies. But then they solo and it’s easy to forget about the construction and just get lost in where it takes them.

Other highlights include Orfield’s exuberant “Memory Bait” (giving Schmalenberger a well-deserved Krupa-like feature and another notable Godbout solo) and effervescent “Steezy” as well as Hutton’s soulfully romantic “My Six” and the cat-and-mouse dance of “Dodged It,” which launches both horns on a near-free ride of soloing.

Orfield’s set closer, the bluesy “Curtains” appropriately suggests an after-hours set closer or encore number. The song recalls for me the Crusaders’ classic “Way Back Home” and would make a perfect theme for the band.

Godbout and Kameron Markworth occasionally trade their acoustic axes for electric ones, adding a tasteful variety to the disc. But it never steers the program off-course. Likewise, Hutton swaps her alto for bass clarinet on four tracks. She is a notably agile bass clarinetist (she cites Chris Potter as an influence), a far too unusual sound in jazz and one that pairs nicely with Orfield’s tenor.

On the lovely “Hope for the Girl,” Orfield provides Hutton an elegant showcase for her bass clarinet prowess. The bass clarinet also features on “OH!” (an early piece for the Ofield - Hutton teaming!) and the aforementioned “Dirty Secret” and “Dodged It.”

Take That Back is a strong showcase for the talents of Joan Hutton and Sue Orfield – individually and collectively. They have an intoxicating chemistry with one another, a strength of presence very much felt in this quintet. Joan and Sue’s compositions have a consistent vitality, unique flavor, even a sense of humor and adventure that’s all-too rare in jazz these days: a real pleasure.

Posted by Douglas Payne at 7:40 PM