"Who's Afraid of Virginia Woolf? (Main Title)" by Alex North 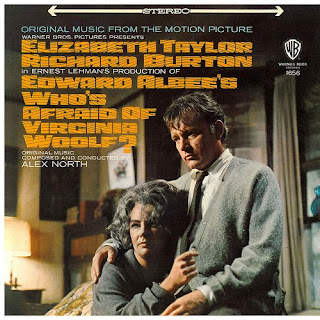 One of the loveliest pieces of music ever heard in film is surely the Alex North theme to the 1966 film Who’s Afraid of Virginia Woolf.

Much of the work North (1910-91) did fell between the later phase of the Golden Age era of film music and the earliest part of the Silver Age era, and as a result sort of landed somewhere in between. North’s earliest successes included A Streetcar Named Desire and Death of a Salesman (both 1951) and Viva Zapata! and Les Miserables (both 1952). Several significant scores followed, but Stanley Kubrick’s Spartacus was a cause célèbre in 1960 as was the 1963 film Cleopatra, but for different reasons. North also scored a number of John Huston films, from The Misfits (1961) to such later films as Under the Volcano (1984), Prizzi's Honor (1985) and The Dead (1987).

The filming of Edward Albee’s 1962 Broadway play, Who’s Afraid of Virginia Woolf was another pivotal moment in film. Re-teaming Elizabeth Taylor with then-husband Richard Burton for the fourth of their 11 films together, it was also the directorial debut of former comedian Mike Nichols, who has since made a career out of filming stage plays and literary adaptations. The film also featured George Segal and Sandy Dennis as the younger couple invited back to the older couple’s place for drinks one night. It is a searing showdown and it makes for memorably searing cinema.

Given the venom and vitriol this story unleashes, it’s a wonder that such a gorgeous theme could emit itself from all the unspoken sadness and bitterness at the broken heart of it all. The simplicity of it is a marvel: solo guitar, harp and strings (and a subtle deployment of winds), in a perfect waltz that is fractured and flowing all at once.

It’s hard to name any exact emotion this theme conveys. Removed from the film, it is a lovely piece that could convey anything from happiness to sadness or fulfillment to emptiness or everything in between. I think that’s why it’s so endlessly fascinating. It fits just about anything. It’s human and classic. It’s timely (for all range of emotions) and timeless.

My ears register this as one the most beautiful pieces of music ever written, scored perfectly to any range of emotions.

The theme was included on an album containing bits of score and dialogue, issued on the Warner Bros. label in 1966. DRG released this album on CD in 2007. But the equally great Jerry Goldsmith (1929-2004), who recorded a number of Alex North tributes in the 1990s, including the full and previously unissued North score to Kubrick’s 2001, re-recorded North’s Virginia Woolf score on a now out-of-print CD for Varese Sarabande in 1997.

[For the record, the 1964 album and single by the great jazz organist Jimmy Smith called “Who’s Afraid of Virginia Woolf?” is not the same piece as the Alex North composition featured here. But that one, credited to Keith Knox and Don Kilpatrick is a heavy-duty swinger in its own right.]
Posted by Douglas Payne at 12:04 AM

Malingering in my garage is the LP of North's score to "Streetcar Named Desire". I gotta go out there sometime this year...

It really is a remarkably beautiful theme. When I first heard it I assumed it was something by Bach.