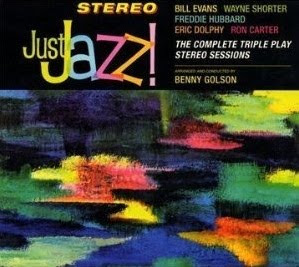 Like many “lost” jazz albums, there is a convoluted story behind this album. But the result, certainly as presented on this Jazz Beat CD, is worth the telling.

The Audio Fidelity label had helped revolutionize stereophonic recordings in 1957. By April 1962, the label commissioned the great Benny Golson, who was then at the helm of The Jazztet with Art Farmer, to arrange a recording combining a jazz group playing jazz standards, counteracted with strings and horns playing “pop” versions of the songs the jazz tunes were originally based on. The idea, which was probably pretty revolutionary for the time, is that the jazz music would come out of one speaker of a then cutting-edge stereo system while the “pop” music would come out of the other speaker.

The result was a strange record with the generic title of Triple Play Stereo and also known by the weird (and awful) cover design’s secondary title, Pop + Jazz = Swing. 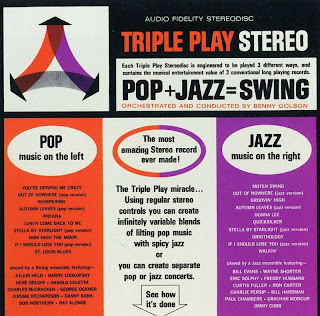 Golson not only wrote ten interesting charts, but assembled an incredible aggregate to fulfill the jazz part of the equation, including Eric Dolphy on alto sax, Wayne Shorter on tenor sax, Freddie Hubbard or Bill Hardman on trumpet, Curtis Fuller or Grachan Moncur on trombone, Bill Evans on piano, Ron Carter or Paul Chambers on bass and Charlie Persip or Jimmy Cobb on drums.

The program included such standard nuggets as “Moten Swing” (with “You’re Driving Me Crazy”), “Out of Nowhere,” “Groovin’ High” (with “Whispering”), “Autumn Leaves,” “Donna Lee” (with “Indiana”), “Quicksilver” (with “Lover Come Back to Me”), “Stella by Starlight,” “Ornithology” (with “How High the Moon”), “If I Should Lose You” and “Walkin’” (with “St. Louis Blues”). 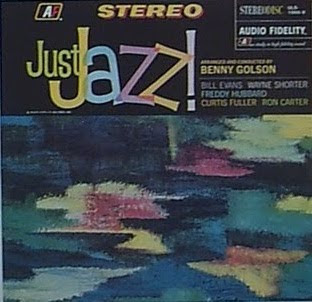 Hardly surprisingly, the album, which seemed to have no concept of its audience, had failed. It was withdrawn shortly after its release and almost entirely forgotten by the few people who even knew it existed. Then, following Eric Dolphy’s June 1964 death, anybody who ever captured the reed player on a session scrambled to release (!) or reissue music featuring anything Dolphy blew during his all-too short life.

Around 1965, the folks at Audio Fidelity opted to reissue the Triple Play Stereo album without the seemingly conflicting and overwhelming strings and horn overdubs, leaving just the jazz players to do their thing. The album, bore a new title – the generic, yet sensible (when you knew why) configuration Just Jazz! - and more colorful, less confusing cover art. Somewhere along the way, the Spanish Fresh Sound label issued the jazz-only tracks on CD (mistakenly indicating the recording date as November 1957). 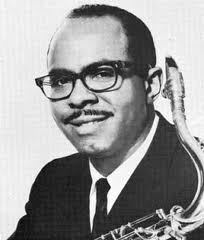 It’s a terrific musical experience that is highlighted by some of jazz’s greatest players, playing particularly well together and providing some distinctively lovely, albeit brief, solos throughout.

Oddly enough, the few jazz listeners who have heard this music don’t have much good to say about it. Most of the time, they lob barbs like “the music doesn’t live up to the personnel” at Just Jazz!.

Maybe people were expecting an event on the scale of Oliver Nelson’s 1961 classic Blues and the Abstract Truth (which also featured Hubbard, Dolphy, Evans and Chambers) or even Freddie Hubbard’s terribly disappointing The Body and the Soul of the following year (also featuring Hubbard, Dolphy, Fuller in arrangements by Wayne Shorter with many of the string players heard on the Triple Play portion of the album). It’s worth noting that Hubbard, Fuller (a frequent Golson collaborator) and Shorter were together in Benny Golson’s former boss Art Blakey’s Jazz Messengers at the time too.

"Out of Nowhere" from the Triple Play Stereo portion of the Just Jazz! CD with solos by Curtis Fuller on trombone and Wayne Shorter on tenor sax. Arrangement by Benny Golson.

Many others never have anything good to say about “jazz with strings” dates that make up Triple Play Stereo. Even Bernard Lee, the notes writer of this issue of the Just Jazz! CD, thinks it was too much. That does Golson’s genius for this sort of thing a major disservice.

Sure, most would prefer to listen to the Just Jazz! tracks of this CD as I do over and over again. But what Golson achieves with melodic counterpoint on the original date has to be at least inventive if not notably historic. This is beautiful music – jazz for people who don’t like jazz and creative enough for those who understand jazz enough to at least like the music or appreciate the significance of the contributors heard here.

Anybody with any interest in any one of these players will not be disappointed in Just Jazz!. The arrangements swing nicely, if a bit conservatively, and the group is peopled by players who not only know these be-bop staples inside out and backwards but know how to play well in a section. Each one, of course, knows how to cut a rug with a meaningful solo, no matter how brief, too.

Just Jazz! also deserves to be considered a feather in the cap of the talented and prolific Benny Golson, who will turn 82 in a few weeks and, as of this writing, is still going strong as a jazz player and great musical thinker.
Posted by Douglas Payne at 11:13 PM

Hey Doug Since I'm out of town hope
I can remember this I have
an old Argo (The Best of Argo Jazz)
Time, Five Spot After Dark (JazzTET)(Benny Golson). (THE CALL)
Roland Kirk, That's all I can remember. Thanks for the great write all ways interesting. 401k

art said...
This comment has been removed by the author.
7:29 AM

Thanks for your blog of 1/11/11 concerning the re-release of Benny Golson's
"Just Jazz" album, especially your comment about the 60's release by Audio Fidelity
having "more colorful and less confusing cover art." My father, William Shuler did the
art work for that album and the spanish company did not give him credit. I hope the new
album does.