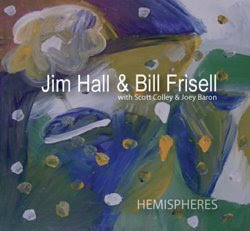 Quite simply, this marvelous two-disc set deserves nothing less than an unexpurgated "wow." It captivates immediate attention and rewards anew upon each repeated listen. It is one of the finest jazz discs produced and released in many a year.

Far too infrequently musicians are able to come together and just make music they want to make. And, more unfortunately, it is not often that record companies give the artists a chance to record music such as this for posterity.

It's sad how often I've heard friends and associates of musician soloists tell me that if you want to hear so-and-so's music, don't listen to their records. That's probably why private recordings (aka bootlegs) are so highly sought by fans. It's usually the only way to hear a musician plying their trade the way they want - and the way they are meant to be heard.

This brilliant "fan-funded" project brings together two master guitarists, Jim Hall (b. 1930) and Bill Frisell (b. 1951), who are working outside their normal units and away from their contracted labels. They are working out of respect for one another's artistry and playing together because they want to - not because it's designed to sell records.

Frisell had actually spent six weeks studying with Hall in 1972, but their paths diverged quite a bit since then, with Hall recording monster discs for the CTI, Horizon and Concord labels and Frisell, well, conquering just about everything and recording a slew of brilliant discs under his own name for the Nonesuch label. This disc marks the pair's first collaboration since their initial pairing on Hall's 1995 Telarc disc Dialogues, which featured Frisell on two Hall originals, "Frisell Frazell" and "Simple Things."

This generous two-disc program features one disc of the pair in a duo format recorded at Tony Scheer's house in Brooklyn, NY, over five days between July and December 2007. The second disc features both guitarists with bassist Scott Colley (who was present on Dialogues) and the always wonderful Joey Baron on drums, recorded by Joe Ferla, a long-time engineer for Frisell (especially his recordings with Paul Motian) and whose earliest work was recording Hall's 1971 Milestone album Where Would I Be?, at a New York studio on September 9, 2008.

Frisell brought a bunch of charts to the duo sessions, including Dylan's "Masters of War," with the idea of creating a sonic landscape for Hall to improvise over and within. This is most apparent on the duo's wondrous "Migration" and "Beijing Blues" as well as Frisell's sonorous "Throughout" and "Family."

The pair revisits some of their earlier compositions like Hall's "All Across The City" (which dates back to a 1964 album Hall recorded with Jimmy Raney) and Frisell's "Monica Jane" (which dates back to a 1986 album Frisell recorded with Paul Bley), named for his daughter, who took the black and white photos included in the CD's booklet (Mrs. Hall took many of the color photos in the booklet).

Interestingly, the pair started by playing each piece straight from the chart, then immediately afterwards played a freer version, or inverse, of the piece. This is the version of each piece that made the final cut. Such is obvious in the way the duo smashes and scatters Milt Jackson's warhorse "Bags (sic) Groove" with a swampy blues march and the utterly gorgeous reflection on the Dylan piece.

The quartet disc balances a high quotient of jazz standards, from "I'll Remember April" and "Chelsea Bridge" to "My Funny Valentine" and "In a Sentimental Mood," with group improvisations ("Barbaro" and "Card Tricks," something of a Hall chart dedicated to Baron's ability with cards) and highly interesting Hall originals ("Owed To Freddie Green" and "Hear And Now").

The open improvisations are as "free" or "out" as things get here. But it is unquestionably jazz creativity at its finest. Nothing is less than wonderfully entrancing. These guys, recorded in a circle in a rather small space, so each was forced to listen to and submit to the other (like true jazz interaction often provokes), seems so intoxicated with what the other is doing that hardly anyone seems to be leading and certainly no one seems to be following. It is an amazing amalgam of unified sounds these four present together.

This is the kind of album that makes you want to thank the musicians who made it. As the legendary Hall said on his web site, "(t)he duets are unique - creative - fun - serious - and more." The quartet album is an added bonus that even furthers these brilliant musical directions.

But one must thank ArtistShare and the fan-funded concept for music made by the people for the people. It reminds me of how it feels to have the Barack Obama administration in control now. A real democracy without regard to special interests.

It's available directly from the ArtistShare label, which offers many other great fan-funded projects from such well-known folks as Billy Childs and Patrick Williams to hugely talented newcomers like harpist Edmar Castaneda.
Posted by Douglas Payne at 11:50 PM