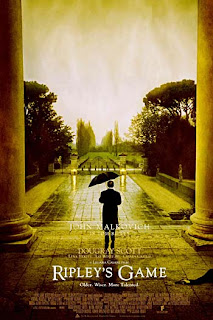 Perhaps one day literary justice will be served by recognizing American ex-patriot Patricia Highsmith (1921-1995) as one of the greatest writers of the 20th century. Certainly there were many other great writers that produced much great work during her lifetime. But few have caught the loneliness and desperation of lonely and desperate (mostly) men in a lonely and desperate time nearly as well - and as consistently - as she did. She had a way of suggesting that all that is beautiful has an inherent ugliness and all that is easily regarded as ugly can, indeed, be beautiful. Her words nearly made reality seem fantastic or otherworldly, yet so commonplace that you or I could be the victim or the protagonist in her wicked world. It's a world so ridiculously common that we traverse it each and every day.

Known primarily for her first novel, the source of Alfred Hitchcock's Strangers On A Train (1951), Highsmith has crafted many other fine thrillers that have become the source of other film adaptations: This Sweet Sickness (1960), probably my favorite Highsmith book and the subject of an odd 1977 French film from the otherwise tremendous Claude Miller (Class Trip); The Cry Of The Owl (1962), which was also filmed in 1987 by the great French director, Claude Chabrol; and, of course, the often brilliant Ripley series, which launched two films from the first book, The Talented Mister Ripley (1955) - Rene Clair's often stunning Plein Soleil (1960), with the utterly beautiful Alain Delon, and Anthony Minghella's film of the same name (1999) with the equally beautiful Matt Damon - one film from the second book, Ripley Under Ground (1970), and two films from the third book, Ripley's Game (1974) - Wim Wenders' impeccable The American Friend (1977) and Italian director Liliana Cavani's 2003 film of the same title, which is under review here.

Even in the many ways it departs from the book (Tom's excessively large but extraordinarily beautiful villa, the change of its location from the south of France to Italy, Tom's beautiful and accomplished wife, and, the brilliant John Malkovich as Tom Ripley, who seems a bit too old and unconvincing as Tom, but pulls it off anyway, among a number of other changes), this film remains an absolutely astonishing experience. I didn't think so at first. I bought this when it was first issued on DVD in the US (2004) and thought then that it paled against The American Friend, long one of my favorite films, which is roughly based on the same story. But after revisiting Liliana Cavani's film some five years later, I think it stands up extraordinarily well. Indeed, I find it more moving as time goes on. Even if, like The American Friend, it gets some points of texture wrong, it gets the overall feeling right. And that's what makes it such a great piece of work.

Tom Ripley (John Malkovich), an American of questionable background who is living extremely well in Europe, finds himself insulted by a neighbor, picture framer Jonathan Trevanny (Dougray Scott), a family man with a life-threatening medical condition. Out of revenge, Ripley involves the framer in a murder scheme provoked by Ripley's shady associate, Reeves (Ray Winstone). Reeves convinces Jonathan to murder an underworld business competitor in Berlin by suggesting that he could earn money for the hit that will provide for Jonathan's family after his imminent death. Jonathan agrees and succeeds in his job, but Reeves forces him to do another killing. Ripley, who has had his revenge, is very much against involving Trevanny any further and is compelled to involve himself in Trevanny's murder of another of Reeves' enemies, and his various bodyguards/henchmen. This hit doesn't go quite as planned, causing dangerous repercussions for Reeves, Ripley, Trevanny and, of course, Trevanny's family.

While it's easy to conclude that John Malkovich is hardly the ideal Tom Ripley, it's not hard to dismiss previous movie Ripleys - Alain Delon, Dennis Hopper and Matt Damon - on other grounds as well. Like the best characters in fiction, Tom Ripley is best personified in one's imagination (actor Andrew McCarthy is probably highest on my list of perfect candidates - even for this feature). Malkovich, however, seems too old for the part (his Ripley should be - or look - about 10 years younger), not as attractive as his role would require him to be and with his patented misanthropy, he seems to lack some of the slimy charm Tom Ripley should possess. Still, after one jumps these hurdles of disbelief, Malkovich turns in a tremendously transforming performance, alternating nasty aggression when necessary with a beautiful and questionable sincerity that very few people could ever pull off effectively in this type of performance. Dougray Scott as Jonathan Trevanny is even more remarkable, projecting a fear that's greater than his life and questioning his humanity in a way that anyone at the abyss might. The development of interplay between Malkovich and Scott becomes even more interesting than the oddly developing relationship between Ripley and Trevanny - a tribute to both actors' skills of inhabiting their characters and their character's relationship with other characters.

Ms. Cavani's direction is without peer. She has a way of effectively capturing many pivotal moments with precious few words. Whether Malkovich's prototypical mumbled half sentences were part of the script or his own invention, something about his man-of-few-words persona (and utterly hilarious sense of humor) works extremely well here. There are many unspoken intimations and undeclared suggestions along the way that provoke glances, action or emotion. When it comes out as dialogue, you know where it comes from. It's not telegraphed - like in so many American films. Cavani sweeps you along, no matter where her camera takes you. You understand and you understand why - even when some of the other characters in the drama don't get it.

Cavani also displays an uncanny ability to capture something between the two main male characters (Malkovich and Scott) that goes well beyond "homoerotic." It's easy to project homoeroticism when two males in a film embark upon something - especially murder - together. It's easy to read that in Highsmith's novel too. It's not so easy to detect it in Cavani's film (it's absolutely not in Wenders' film - and it probably should have been). Here, it's unknowable and rightly so. Cavani shows how these two males, who may not even understand the reality of their own relationship, have a kinship that goes beyond friendship and, at least in this case, beyond sexuality. The true stroke of brilliance here - like in many of Highsmith's books - is that, yes, these guys may or may or not be (fill in the blank), but there's something deeper going on here. If you want to make it about sexuality, go ahead. But it probably goes beyond that.

One thing this film does get wrong is that Trevanny doesn't appear to be as hard up for cash as his predicament warrants. If that is meant as a comment on consumer culture, then it's lost among all the glamour and ugliness the film parades before us. Trevanny lives in a seemingly large, astoundingly beautiful Italian home that seems to be fitted with all the niceties that would keep his beautiful wife and young son quite comfortable upon his death. Jonathan's wife makes many comments about the family's financial status ("we can't afford that," etc.), but their opulent home, seemingly expensive parties, masses of friends - especially in Ripley's overly classy neck of the woods - suggest they're much better off than Jonathan's fear of his family's future would suggest.

But beyond any textual or contextual flaws, one can hardly discount the classy cinematography of Alfio Contini (Zabriski Point), the high production design of Francesco Frigeri (The Passion Of The Christ) and, of course, one of the film's greatest contributors, composer Ennio Morricone's superbly grand score. Morricone's music recalls the best of his Giallo and crime thriller scores from the 1970s - with dashes of classical motifs (signified by the harpsichord) that he has introduced in countless film scores and, most welcomingly, the rock-ish impulses flourished by the nice addition - especially in this day and age - of the electric bass. (For anybody still reading, I would very much like to get a copy of the soundtrack CD, issued only in Italy in 2003. Can anybody help?)

Together, these artists have all collaborated to fashion an arty thriller that mixes the trashy class of the Giallo (an Italian genre of sexy, graphic thrillers from the early 1970s) with the high art of European classics from Resnais, Fellini, Bertolucci and Pasolini.
Posted by Douglas Payne at 12:01 AM

Get daily suggestions and methods for earning $1,000s per day ONLINE for FREE.
SUBSCRIBE NOW

Start following our trades NOW & gain up to 270% per day.