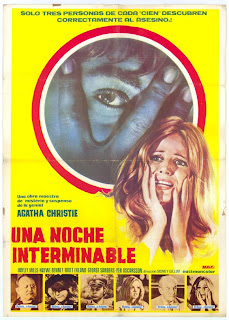 At first blush, it may seem surprising that Alfred Hitchcock never touched upon the work of Agatha Christie. Both were contemporaries in British arts, prolific and exceedingly popular, and each made successful careers out of the intricate and fascinating art of murder. But Hitchcock had very little use for whodunits and the bulk of Christie's work reveled in the form.

Endless Night is a pleasant exception in Christie's work. It's still a whodunit of sorts. But like some such later novels as the wonderful Miss Marple adventure, Nemesis (1971), the motivation is much more psychologically driven than before.

First published in 1967, Endless Night is a late-period novel that contains none of Christie's famed "sleuths" as Hercule Poirot, Jane Marple or Tommy and Tuppence. The mystery itself unfolds to reveal buried layers of psychology, in a manner most unlike any of Christie's previously prodigious who-benefits-by-the-will murder mysteries.

Most startlingly of all for Agatha Christie, the story is told in the first person, from the main male character's point of view. Like the novel D'Entre Les Mortes, which was the basis for the film Vertigo - or, to a lesser degree, the novels of Strangers on a Train and Marnie - Endless Night seems written especially for Alfred Hitchcock. One has to wonder if Hitchcock, following the failures of both Torn Curtain (1966) and Topaz (1969), wasn't considering something very much like Endless Night (he ended up doing the fine Frenzy, his first British film in over three decades).

In this 1972 film, British director and screenwriter Sidney Gilliat (1908-94) crafted Christie's story very much in the Hitchcock tradition. Gilliat had earlier worked with the master, writing scripts for Hitchcock's brilliant The Lady Vanishes (1938 - which was remade in 1979) and the less exciting Jamaica Inn (1939), the last two films Hitchcock made in Britain before coming to Hollywood. His direction here is hardly outstanding. But the script, where his real talent lies, is worth discussing.

The film benefits most by a very Hitchcock-like score from the magnificent Bernard Herrmann (1911-75). This is a classic in every sense of the word and one of those Herrmann masterpieces that has, despite my attempts in the past, regrettably never been issued on CD or LP.

Living in a sort of exile in London at the time, Herrmann hadn't really recaptured the magic he lent to such Hitchcock classics as The Man Who Knew Too Much, Vertigo, North by Northwest, Psycho, The Birds or Marnie.

Until Endless Night, a film which shares much of the psychological drama of both Vertigo and Marnie, Herrmann sort of floundered - dealing with a new generation of expectations for film scoring (trying to attract the teen market with pop songs). This score is tremendous; often using a Moog synthesizer (in my mind, to suggest a haunted soul) in place of what probably would have been a Theremin in years past.

The score's only drawback is the delivery of the main theme, which is set to a fragment of a William Blake poem that lent Christie's story its title. During the main titles, it's an instrumental set against crashing waves with crashing string arpeggios, which seems just a bit over the top. It's also performed as a vocal piece that finds a soprano (who is played by Hayley Mills in the film) singing in a way that sounds contrived, nearly unreal. Maybe that's the point. But it detracts from Herrmann's otherwise wonderful score - and the film's beautiful presentation of his music.

Mike Rogers (Hywel Bennett), a young working class man who drifts from job to job, discovers a beautiful plot of land for sale called Gipsy's Acre and dreams of building the perfect house on it. One day there, he meets the beautiful young Ellie (Hayley Mills), who also appreciates the beauty of Gipsy's Acre, but both are startled by a strange woman who warns them that the property is cursed and will only bring misfortune to anyone who purchases it. Mike later discovers that Ellie is in fact "the sixth richest girl in the world" and, having turned 21, is now in control of her own vast fortune. She reveals that she has bought Gipsy's Acre and will build the house that Mike wants and, despite the obstacles in their divergent backgrounds, the two decide to marry and move into the house together. Their marriage shocks everyone in Ellie's "family" but is welcomed by Ellie's companion and former tutor, Greta (Britt Ekland). After the house is built, Greta comes to visit and, much to Mike's displeasure, Ellie encourages her to stay on.

The death, such as it is, comes much later in the story here than it would in a Hitchcock story, which probably explains why many viewers consider this film a poor imitation of Hitchcock. But this isn't fair. It comes as a dramatic crescendo, indicating that Agatha Christie had larger fish to fry than merely providing a boring police procedural, elusive investigation or even a basic whodunit. As in reality, death here comes as an unexpected surprise. It seems impossible that it should be murder. What's even more confounding is not who did it, but why it should have occurred in the first place.

The film, unlike the book, also hints throughout at Mike's bi- or homosexuality. Certain scenes suggest Mike's father molested him as a child. Even at the bitter end, Mike professes that he only ever really loved his father, the Clare Quilty of Mike's life. Mike's love of "beautiful things," which is not in the book and a trait Mike claims he inherited from his father, can also suggest that Mike is "not the marrying kind."

Additionally, the film finds architect Santonix (Per Oscarsson) more than obviously attracted to Mike and the younger man seems somehow to welcome the attention and, possibly, reciprocate it. What's more, Santonix constantly hovers over the young man, touching him frequently. Early on, when talking about houses, the two seem to be involved in some sort of dreamy, post-coital conversation. Santonix's stated love for Ellie pales against his apparent desire for Mike.

There are other hints and glances along the way, but nothing that would make it anything more than merely suggestive. While many of TV's Poirot and Marple fans object to the infusion of homosexuality in a Christie story, I think it often helps to add context to a character that Ms. Christie had either only hinted at or just didn't bother to flesh out properly (I suggest this not because sexuality defines a person - it does not - but it does tend to illuminate, in one way or another, the other choices an individual, or in this case, a character, makes). It does here too.

(Spoiler alert!) There can be little to argue that Mike achieves his objective here, not for love of another woman but because he gets the house he wants. It matters not (much) that he has to kill one woman to get it and let another move in. A woman is merely decoration in Mike's house.

This also helps underscore what I think is the most significant psychological part of this story. Despite Mike's sexual or avaricious inclinations, he ended up loving Ellie. This was probably true in the book. In the film, Mike declares his love for Ellie in a weird sort of rage that seems questionably convincing - especially to anyone who has ever wrestled with whether or not they actually love someone they're supposed to love.

Maybe it's because Ellie's sincere love for Mike was the first experience he'd known of being loved or being loved for who he is. To paraphrase some of the film's dialogue, it's like Vertigo in reverse. It's difficult to call something murder when the victim may have committed suicide knowing that that would make her beloved happy. And Mike's realization of this is probably the cause of his real madness - he killed the love he always needed.

So how does this make Mike homosexual? That's the beauty of life. It doesn't. It's more complicated than that. Hywel Bennett gives a pretty decent performance as Mike and, for the most part, does a good job showing these different shades of Mike's truly unknowable character - though, I think the part calls for a different sort of actor (first thoughts run to Ian Ogilvy; seconds to Jon Finch).

Gilliat's film stays pretty true to Agatha Christie, but adds some depth of drama that fleshes out the main characters more than Christie had done or, perhaps, even in 1967, felt able to do. Let's face it, neither Christie or Gilliat were spring chickens at the time they presented their stories, but Gilliat presents the braver and, I feel, more honest version of Endless Night.

Hitchcock may have strengthened the story even more - and certainly would have shot it more artistically (and with stronger leads, despite Hayley Mills' most lovely performance) - but what is here stands strong among Christie's best filmed works. It deepens Christie while remaining very true to her work. Best of all, it's very Hitchcock-like, the sobriquet often used to both praise and damn the film. It's just a shame Hitchcock never opted to do it himself.

Maybe one day, if there's any interest, I'll tackle the interesting oddities of Ordeal By Innocence, another unusual and fascinating Agatha Christie story from 1958 that features none of her regular sleuths. This story was turned into a strange, yet compelling cable-TV film in 1984 (with a wonderful Dave Brubeck score that was first, far too loud and wholly inappropriate for the film and, second, never issued as a soundtrack) and was, even more bizarrely, turned into a Miss Marple mystery for the fairly awful ITV series, Marple, in 2007.
Posted by Douglas Payne at 11:23 PM

Find Out How You Can Master Your Habits And Reprogram YOUR Subconscious Mind To Get Any Result You Want In Your Personal Growth and Fulfillment!