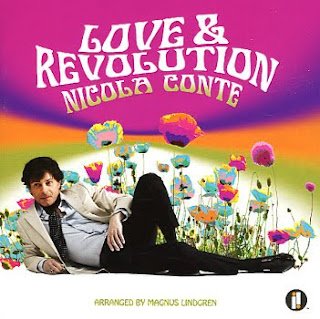 For more than a decade now Nicola Conte has scored brilliantly as a DJ, promoter, producer, compiler and recording artist. From his earliest recording, 2000’s still remarkable Jet Sounds (also issued in the US as Bossa Per Due), Conte has also displayed a retro appreciation for the lounge appeal of bossa nova combined with a soulful groove informed by his love of all things jazz. He even waxed a record for the vaunted Blue Note label in between regular forays on the Italian Schema imprint where he made his name.

That love has deepened over the years to prominently spotlight things in the spiritual realm of what some folks call improvised creative music. Indeed, the Japanese branch of Universal Music commissioned Conte to compile Spiritual Swingers (EmArcy, 2010 – also issued in Europe), focusing on the “deep, afrocentric, modal jazz from Universal Music Archives.” That set is a terrific mix of diverse features from Abbey Lincoln, Ahmad Jamal, Dorothy Ashby, Yusef Lateef, Roy Haynes, Mark Murphy, Klaus Weiss and others that lives up to its grandstanding title and Conte’s abiding love for this sort of thing.

Conte’s Rituals (Schema, 2008) unveiled this nearly heavenly sound kaleidoscope in shades that were a little too primary and sounds that were frankly just a bit too obvious and ultimately annoying. So expectations for Nicola Conte’s Impulse (!) debut were on the low side.

But while Universal Music seemed to repay Conte for Spiritual Swingers, the result, Love & Revolution, returns the favor by giving the label – celebrating its 50th anniversary this year and releasing an average of one new record a year these days – with an album that lives up to Impulse’s storied heritage.

With Love & Revolution, it’s fair to say that Conte, a guitarist who almost never dominates and a musician that often doesn’t even participate, comes into his own as a composer and conceptualist. It’s a mature work that is more cohesive, satisfying and unique than just about anything Conte has attempted before. A hippy dippy vibe prevails here, as suggested by the retro cover graphics, recalling some of the Impulse work of Dave Mackay and Vicky Hamilton, whose “Here” is heard here. But that’s more a superficial catch-all than what this music is all about.

As before, the tendency toward songs with singers prevails here and, as usual, Conte surrounds himself with a variety of young singers who give his music just the right touch of silky soul including José James (“Love From The Sun,” “Here,” Mal Waldron’s “Temple of Far East” set to Conte’s words), Gregory Porter (“Do You Feel Like I Do,” Jackie McLean’s “Ghana” set to Conte’s words), Melanie Charles (“Mystery of Love,” “Love and Revolution,” Cal Massey’s “Quiet Dawn,”) and Hungarian vocalist Veronika Harcsa (“I’m the Air”).

The vocalists soak up the ambient nightclub-y vibe of the rhythm section – driven with loving perfection by drummer Teppo Makynen throughout – and several prominent soloists enhance the jazzy groove of the whole thing like tenor saxist Tim Warfield (“Love From The Sun”), trumpeter Till Brönner (gorgeous on “Here,” “Temple of Far East”) and even Conte himself (briefly on “Mystery of You,” “Shiva”).

Swedish reed player/arranger Magnus Lindgren, who solos nicely on “Do You Feel Like I Do,” “Scarborough Fair” and “Love and Revolution,” provides the subtle sketches that punctuate each track with a warm glow of northern soul and a white heat of those orchestras of yore.

Conte doesn’t play on every track. But when he does, his guitar compatibly fuels the fluidity of the rhythm section and provides an appropriate undertone to propel the other players to some notable work as evidenced particularly on “Scarborough Fair,” “Quiet Dawn” and “I’m the Air.” Like Quincy Jones, Nicola Conte is particularly adept at attracting and assembling a worldly group of musicians from a variety of different backgrounds to pontificate perfectly in their own manner in the leader’s given medium.

Apparently, while Love & Revolution has not had an official US release (and one doesn’t appear to be scheduled), several versions of the disc are available. There is the single-disc European version with the white-sky cover featuring 15 tracks. The Japanese version of the CD adds two bonus tracks, Max Roach and Oscar Brown Jr.’s “Freedom Day,” featuring Tim Warfield, Fabrizio Bosso and Pietro Lussu, and Horace Tapscott’s excellent “The Black Apostles,” featuring Logan Richardson, Nicholas Folmer and Pietro Lussu.

There is also a European version of Love & Revolution with the pink-sky cover (pictured above) that features a second disc with the Japanese bonus tracks plus Dave Brubeck’s “Autumn in our Town,” with Veronika Harcsa and Fabrizio Bosso; “Here (alt. version),” with Alice Ricciardi on vocals in place of José James; “The Happiness Tree,” with Veronika Harcsa on vocals and Pietro Lussu lustrous on piano; and Charles Lloyd’s semi-standard “Forest Flower,” with Tim Warfield on tenor sax and Flavio Boltro, a song first heard on a 1964 Chico Hamilton album released on Impulse.

Needless to say, this is the one to get. The added tracks only enhance what is already a thoroughly enjoyable experience.

A vinyl copy of Love & Revolution is supposedly forthcoming too.
Posted by Douglas Payne at 3:52 PM

If you're looking for a reputable contextual advertising network, I suggest that you take a look at Chitika.