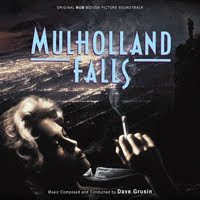 While Dave Grusin has crafted many a musically memorable soundtrack, highlights of which probably include The Heart Is A Lonely Hunter (1968), The Yakuza (1974), Three Days of the Condor (1975), On Golden Pond (1981) and Tootsie (1982), he is probably a more remarkable and more remarkably unheralded sound colorist, expertly matching music so seamlessly to an image as to be ambient sound.

It’s like a breeze blowing through a room, or the aural aura of unspoken emotion wafting through the celluloid spaces.

The composer, a superb jazz pianist who’s led many a stimulating record outside the world of film, sculpts sounds for film that are so attuned to what’s happening on screen that you barely register it as music. It’s a sort of “musique concrete” with actual musical instruments – often Grusin’s own piano and one or two other carefully chosen sounds – a myriad of motifs, lacking a fully-developed melody which would make something of a tune. But oh how melodic Grusin’s motifs are.

Mr. Grusin’s triumphs in this area are many in his half century of scoring motion pictures, TV films and serials. But those that come most readily to mind are those that are not often celebrated for being Grusin masterworks, if appreciated for any reason at all. These might include Reds (1981), The Goonies (1985), A Dry White Season (1989), The Bonfire of the Vanities (1990), Hope Floats (1998), the terrific cable TV film Recount (2008) and 1995’s Mulholland Falls.

Mulholland Falls is a neo-noir film, based on a true story, of a police team known as the “Hat Squad” that was prepared to take the law into its own hands to subvert the rise of gangsters and the criminal element in 1940s-era Los Angeles.

Directed in a percussive style by the riveting director Lee Tamahori (Once Were Warriors, Die Another Day) with an exceptional cast including Nick Nolte, Melanie Griffith, Chazz Palminteri, Michael Madsen, Chris Penn, Treat Williams, Jennifer Connelly, John Malkovich and Andrew McCarthy (not to mention cameos by former neo-noir icons Bruce Dern, Rob Lowe, William Petersen and Virginia Madsen), Mulholland Falls probably promised more than it could deliver – whatever that was.

Or, maybe people weren’t ready for a James Ellroy-like take on 40s-era L.A. in 1996. Apparently, they were ready when L.A. Confidential, based on James Ellroy’s novel of the same name, showed up on screens the following year.

In any event, Mulholland Falls proved to be something of a disappointment, at least at the box office. Critics, though, were kinder to the film than audiences. Roger Ebert wrote in the Chicago Sun-Times “This is the kind of movie where every note is put in lovingly.” But the talky movie wasn’t filled with the snappy (though often loopy) dialogue of noirs past as much as it was seen through the more psychoanalytical lens of too much contemporary drama. It was probably more reflective than people like their noirs to be. But lots of cool cigarette smoke careens through each scene.

The film’s title derives from the hills high atop L.A.’s famed Mulholland Drive, where criminals and the like were rolled who the “Hat Squad” attempts to warn off. Apparently this sort of intimidation worked – at least until Miranda warnings came into practice in 1966. Then a woman gets murdered who has liaisons with powerful men, one of whom is a married man of the Hat Squad. She even had secret films made of her trysts. Thus signals the beginning of the end of the “Hat Squad.”

The story shares the same sort of exciting combination of L.A. in the ‘40s reality and pulpy Raymond Chandler-esque thriller stuff that made Roman Polanski’s 1974 film Chinatown the classic neo-noir it was. Curiously, Grusin finds inspiration (not imitation) in composer Jerry Goldsmith’s Chinatown score as much as Goldsmith himself repays the compliment to Grusin with L.A. Confidential’s lovely yet understated score (the two composers have crossed paths before, notably on The Man From U.N.C.L.E.).

A soundtrack for Mulholland Falls was issued by the Edel label at the same time as the film, containing 13 tracks, including Aaron Neville’s performance of “Harbor Lights.” Here, Kritzerland – in a release limited to only 1,000 copies – has issued Grusin’s entire score containing 16 suites (often using different titles than found on the Edel release) plus the Aaron Neville track and an alternate version of the “Main Title,” producing a program that totals nearly 52 minutes.

Dave Grusin does not go for the obvious in Mulholland Falls. He provides a positively appropriate musical counterpoint to Tamahori’s percussive direction; one that relies on mood and feeling more than rhythm and action.

There’s no mournful saxophone or wailing trumpet, like the night owl howling at the midnight moon of so many clichéd takes on noirish gestures. Despite utilizing the brazen force of an entire symphony orchestra, Grusin often designs his motifs for several instruments, centering around his piano, a few strings and almost any horn except, for the most part, a trumpet or a sax.

The themes aren’t as immediately accessible as so many of Grusin’s melodic pieces – and more popular scores - are. But wow. Do they have a power that works up a special intensity after repeated listens. I was surprised to read in this CD’s notes that producer Bruce Kimmel considers this to be his favorite Grusin score. “Not only does his music do everything that film music is supposed to do,” writes Kimmel, “but apart from the film it is a great listening experience.”

I agree. Especially now. Although I probably wouldn’t name Mulholland Falls as my favorite Grusin score, I am surprised at how much this wonderful music has enraptured me since acquiring this disc.

The mournful “Main Title” is strikingly sad and foretells the doom that is to come. But it’s not at all sentimental or even mournful. It’s repeated often in various instrumentations, alternated by the slightly more rhythmic secondary theme, first heard as “Drive To Perinos” (then again immediately thereafter in “Drive To Falls” and heard in its best gestation as “End Credits”) and also repeated often.

Grusin displays his absolutely lovely piano prowess on “Max Home Drunk” and in such brief spots as “Max Meets Timms,” “After Phone Call” and the extraordinarily wonderful “End Credits.” The Herrmann-esque approach to “FBI Search/What Happened?” seems spot on too.

Mulholland Falls is a glorious score and kudos to Kritzerland for issuing Grusin’s shimmering achievement in its entirety (and remastered particularly nicely to boot) and for providing the beautiful cover graphic, which more closely resembles the film’s poster than the original Edel soundtrack.
Posted by Douglas Payne at 1:27 AM

I love the movie. Actors, director, and the musical score are just perfect together. I never get tired of watching the film, and the score just axcentuates this noir story. Thanks for the great experience.