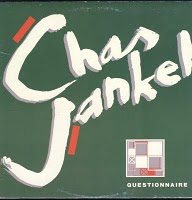 Today's disco discovery: This is probably the very first video I ever saw. And it’s still one of the very best.

The song is also one of the best I’ve ever heard too. Immediately upon hearing this (on HBO, I think), I went out to get this album – which is also tremendously great. It’s also one of those albums that I still have and cherish.

I vaguely knew of Chas Jankel at the time as he was a former Blockhead, who helped create the immediately awesome “Hit Me With Your Rhythm Stick.” Quincy Jones had already had a massively huge hit with Chas' “Ai No Corrida” too.

I had never seen or heard anything like “Questionnaire” before. And this was a real ear-opener. I am shocked it never became the huge hit it deserved to be. It is clever, funny, artful and respectful…everything a great song ought to be.

Chas Jankel was also extremely beautiful. His voice is sexy as hell too. You can see and hear that in this video. He has the most bedeviling smile. And he has a hell of a way with a tune, as “Questionnaire” amply suggests. Enjoy.
Posted by Douglas Payne at 2:02 AM

Never heard of this artist and have never seen the video. I guess it didn't grab me quite to the extent that it did you, but it is certainly not bad and I did enjoy it. Looks like your blog covers some interesting ground. I'll have to check out more of it.

Lee
Tossing It Out