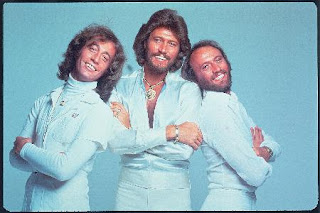 It’s kind of hard to admit public admiration for these guys. First, it’s probably never been cool to like the Bee Gees. Even when they were ridiculously popular and selling millions of records, hardly anyone admitted liking Barry, Robin and Maurice Gibb. They’d already had so many highs and lows before disco made huge stars out of them. Then disco and Saturday Night Fever made the name “Bee Gees” the most reviled name in music history.

Second, it’s hard to find any other internationally famous group other than Abba that was so damnably and intentionally commercial as the Bee Gees. They almost invite their own scorn. Some of their music is so saccharine and syrupy that you can gain weight just listening to it.

But still, Abba is now a cult phenomenon and their music got turned into a hugely successful Broadway play and, later, a shockingly star-studded motion picture, Momma Mia. So why is it that the Bee Gees can’t have their own slice of the musical pie?

The “B”rothers “G”ibb (which is where the group’s name is derived) never really recovered from the American “disco sucks” backlash, though the group went onto score a number of huge worldwide smashes for other artists (Barbara Streisand, Dionne Warwick and Kenny Rogers) and even copped a few more of their own hits under their own name.

My first experience with the Bee Gees came during the summer of 1975 when “Jive Talking” was a huge hit. This classic tune had a unique rhythm, which I always remember was said to replicate the sound of the rickety bridge the Brothers Gibb heard while crossing over to the recording studio in Miami where they recorded the music from the epic album Main Course. It was and remains a real joy. “Jive Talking” makes me feel the happiness of being a kid and the joy music can bring (at least to a kid who really wasn’t all that happy).

Later, of course, as the Bee Gees grew in fame, my fandom grew along with it. “Nights on Broadway.” “You Should Be Dancing.” “Boogie Child.” “Stayin’ Alive.” “Night Fever.” I thought Saturday Night Fever was the best album ever recorded at the time (I considered it my favorite album for all of 1977, 1978 and 1979). I loved brother Andy Gibb’s 1978 hit “Shadow Dancing” (hilariously used many years later on the "Tom's Rhinoplasty" episode of South Park ). I even adored Barbra Streisand’s 1980 Gibb-fest Guilty at the time. Then there was Andy Gibb’s great and little-known 1980 single “Time is Time.”

My tastes gradually moved away from pop music and the Bee Gees. But I never forgot some of the great melodies the Brothers Gibb crafted. For me these included such magical musical moments as “To Love Somebody,” “Down the Road” and “Edge of the Universe.”

There were also the occasional Gibb moments that caught and captured my attention. I’d like to feature three of these here: Kenny Rogers’ “Eyes That See In The Dark” (1983), Barry Gibb’s “Shine Shine” (1984, with its brilliant counter-melody during the final horn sequence) and the Bee Gee’s own spectacular “One” (1989 - with its two or three bravura dramatics). As I’ve gotten older I’ve learned to appreciate the remarkable melodies the brothers crafted; guided, I think, by brother Barry. The lyrics often leave a lot to be desired (or questioned). But these melodies – and the heavenly harmonies – are a treasure to behold.

It’s a shame that I can’t compile my own “best of the Bee Gees” – or that some great instrumentalist hasn’t come up with his or her own significant Bee Gees tribute. But many others could and probably would debate on what constitutes the right or the correct Bee Gees tribute. Here are just three tunes that I will always cherish.

Once again, Doug, a brilliant post. The Bee Gees remain one of the unsung greats, trapped between Herman's Hermits and the Beatles. And don't forget one of the boys' best sideman dates: "Emotion" by Samantha Sang.

I absolutely LOVE the Bee Gees's music, their tunes always cheer me up when i'm down or make me feel understood when i can't express how i feel. Regardless of wether people thought/think it's cool to like them, and since i'm 22, some of friends don't understand what i might see in them but i'll proudly admit to anyone that i'm a huge fan of the Bee Gees:)

and may i add that you're a great blogger, my thoughts don't stray when reading your blog (and i have a short attention span)