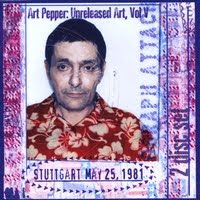 Through the years I’ve had the infrequent occasion to hear Art Pepper’s records. Often, it’s because of someone else I wanted to hear who is featured on the record. I admit that I’ve never been sufficiently moved enough to buy or keep an Art Pepper record, despite the fact that there is no denying his technical facility or the gorgeous sound he made with his horn.

I even remember reading a book last year by one of my favorite authors, Michael Connelly, where his jazz-loving crime-fighter Harry Bosch is relaxing (and understanding a crime) to an Art Pepper CD and I thought to myself that I have really neglected the Art Pepper aspect of my own jazz education and enjoyment.

But, like all the truly great players, there is a plethora of Art Pepper’s music to consider. Where does one begin? Despite drug problems and intermittent prison stays, which kept him pretty much off the scene between 1965 and 1975, the alto saxophonist was recorded in many legitimate settings after 1975 until his 1982 death.

There were also many, many legitimate and illegitimate recordings made of Art Pepper’s live performances. Many more of these have come to light and been issued since the alto saxophonist’s death nearly three decades ago.

“Pepper’s remains one of the most immediately identifiable alto sax styles in post-war jazz,” writes Richard Cook and Brian Morton, the uber-talented wordsmiths behind The Penguin Guide to Jazz Recordings. “If he was a Parker disciple, like every other modern saxophonist in the ‘40s and ‘50s, he tempered Bird’s slashing attack with a pointed elegance that recalled something of Benny Carter and Willie Smith. He was a passionate musician, having little of the studious intensity of Lee Konitz, and his tone – which could come out as pinched and jittery as well as softly melodious – suggested something of the duplicitous, cursed romanticism which seems to lie at the heart of his music.”

How apt. And true.

Art Pepper’s devoted widow, Laurie, has been doing an extraordinarily loving job of showcasing some of these performances on her own Widow’s Taste label. The latest is this terrific two-disc set, recorded in Stuttgart, Germany on May 25, 1981.

Comprised of several fan recordings - which have been re-mastered to stunningly pristine effect - the performance finds Art Pepper captured remarkably well with pianist Milcho Leviev (the veteran of Don Ellis, Airto and Billy Cobham who, like the bassist here, had played on and off with Pepper since 1978), bassist Bob Magnusson (Buddy Rich, Sarah Vaughan, John Klemmer) and drummer Carl Burnett (The Three Sounds, Freddie Hubbard, Kenny Burrell).

This is the same group that was first assembled on a 1978 Japan-only recording (Art Pepper Memorial Collection: My Laurie) and was also captured on the third “unreleased” set issued by Mrs. Pepper’s Widow’s Taste label that was caught live a few weeks earlier in Croydon, England.

The tracks here are all long, resourceful and repeatedly listenable. The program is refreshingly not overawed by the typical bebop warhorses, surely a testament to Pepper’s fundamental creativity, and the abundant Pepper originals are invigoratingly interesting enough to grab and maintain attention.

Pepper’s originals are surely the most interesting performances of the program. First up is the post-bop set-opener of “True Blues” (like “Landscape” and “Over the Rainbow” first heard on the 1979 album Landscape), played with an integrity that suggests Pepper means each and every one of the notes. The moody modal jazz of “Landscape” is the two-disc set’s first notable performance, eliciting tasty solos from all concerned, particularly Leviev.

“Patricia,” written for Pepper’s daughter and first recorded on the 1956 album The Return of Art Pepper, is a touchingly sensitive performance that yields to a gospel fervor in its last few moments. “For Freddie” (first heard on one of the famous 1977 Village Vanguard recordings Pepper made with George Cables, George Mraz and Elvin Jones) was originally written for a chef named Freddie and ended up becoming a tribute to Freddie Hubbard. Oddly, Pepper and Hubbard , who became friends, were only recorded together on the trumpeter’s underrated 1980 album Mistral. This marginal tune and its performance here never suggest Hubbard. Unfortunately, neither rises to the level the rest of the concert achieves.

The gorgeously romantic “Yours Is My Heart Alone” (like “Patricia,” “Cherokee” and “Make A List,” also captured on the 1981 Croydon, England, set - Unreleased Art Vol. III) is handled like a bop bossa but provides a sensational turn for Pepper, who seems to be racing to include a plethora of romantic ideas and emotions.

Al Jolson’s “Avalon” goes all the way back to a 1952 album with Shorty Rogers that also featured “Over the Rainbow” but this seems to be the first time the alto player performed the song on clarinet. It doesn’t sound like it would work. But it’s an exceptionally lovely performance that doesn’t yield to nostalgia as much as it would suggest. Pepper’s playing swings with delight and such beauty that it’s unfathomable he didn’t play the clarinet more often.

“Over The Rainbow” (which Pepper first recorded with Stan Kenton in 1947 and performed and recorded frequently up until the time of his death) gets an impassioned and fortunately atypical performance of someone who knows the tune and plays it as if they well know, very well know, what it means. The rhythm section, too, responds in kind. This is not a warhorse. It’s a poetic performance.

The set closes with a fiery take on “Cherokee,” which Pepper first waxed with Shorty Rogers in 1951. Pepper seems to be channeling John Coltrane’s Impulse period here, a time when Coltrane was redefining jazz and when, curiously, Pepper was off the scene. But it does something to invigorate the tune. The rhythm section gets as fired up too, aiding Pepper (almost) out into the stratosphere. It’s a marvelous way to close the set and a suitably spectacular way to end to a very rousing performance.

For me, Unreleased Art Vol. V: Stuttgart was a marvelous introduction to the world of Art Pepper. For fans and listeners more familiar with the great alto saxophonist than I, it would be difficult to complete a good Art Pepper collection without this stimulating and substantial performance.

Hey Doug
Enjoyed your ART PEPPER Blog I
watched a crappy DVD it was titled
Heart Beat about Neal and Carolyn
Cassidy, Jack Kerouac and the
Beat generation. I didn't want to
stop watching the DVD because the
alto saxophonist souned really
familar yep Art Pepper.