In between his little-known Eastbound/Westbound years (1973-75) and the prolific Muse years (1976-94), tenor saxophonist Houston Person recorded his only two albums for a major label, Mercury Records, home to many a pop hit since being founded by Irving Green, Berle Adams and Arthur Talmadge in Chicago, Illinois, in 1945.

The company, now owned by Universal Music, the largest record concern in the recording industry, was home at the time to hugely popular rock acts like Bachman Turner Overdrive, Thin Lizzy, the Ohio Players, who like Person came to Mercury from Westbound, and, for a brief period between 1976 and 1978, jazz acts like Gabor Szabo, Jimmy Smith, Chico Hamilton, Bennie Maupin and Houston Person.

Houston Person (b. 1934) is one of those tenor giants who is always compared to the bebop-meets-R&B sax of Gene Ammons (1925-74), or is said to carry on Ammons' "big horn" sound of softly swinging, growly blues. Because he tackles so much popular fare and has a fondness for overplayed standards, Person is also often compared to Sonny Stitt (1924-82).

But even from his earliest records, Person has maintained an easily recognizable signature sound on tenor sax that's all his own, regardless of the format or context he appears within. His sound was "Person-alized."

He has since become something of an "acid jazz" icon - a term he's actually said to dislike - but I don't think it's appropriate to him. The vast majority of his music is as far away from "acid jazz," "funk" or "groove music" as you can get. There was a time, from say 1969 to 1973, when he fooled around with more soulful forms of jazz like R&B and funk that probably helped him gain a certain type of commercial acceptance.

And then for a little while, starting in about 1974 when jazz-with-a-dance-beat hits such as Deodato's "Also Sprach Zarathustra (2001)" and Manu Dibango's "Soul Makossa" made it big, Person was willing to jump into the fire more and embrace the emergence of disco.

In 1973, after seven years and 11 albums for the jazz-bound Prestige Records, Houston Person switched over to Detroit's Westbound Records, home at the time to George Clinton's Funkadelic and the Ohio Players, whose hit "Pain" became a part of Person's repertoire. The tenor sax great opted here to incorporate more funk into his groove and over three albums for the label, increasingly introduced disco rhythms to his musical vocabulary.

Houston Person was offered more money than he'd ever been offered by Mercury Records in 1976 - and significantly wider exposure due to Mercury's amazing distribution network (as a result, it's much easier to find old copies of Houston Person's two Mercury albums than any of his albums for the Prestige or Muse labels, who printed much smaller quantities of albums than the majors like Mercury did) - so he continued his disco experiments over only two albums the label issued by the leader in 1976 and 1977. While much of Person's disco work is neither terribly revolutionary nor ultimately convincing, his ability to deliver a sincerely soulful performance with a groove always merits attention, which is why I am covering these albums here.

Neither of Houston Person's Mercury albums have ever appeared anywhere on CD. 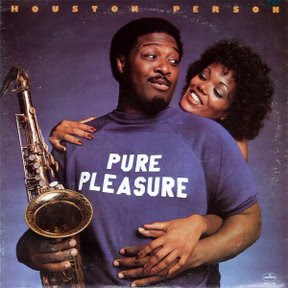 Pure Pleasure (Mercury, 1976): Houston Person recorded Stolen Sweets and The Big Horn for the Muse label before waxing Pure Pleasure. But this was the album that was issued right after the tenor saxophonist's little-known 1975 Westbound album, Get Out'a My Way. Pure Pleasure was intended as a quick follow-up to the previous album's semi-hit "Disco Sax." Like the Westbound album, which was also arranged by Detroiter and former Motown house arranger Jimmy Roach (Smokey Robinson & The Miracles, Four Tops, David Ruffin, etc.), this disco-oriented album was an overt attempt to cross over into commercial heights that few jazz horn men ever succeeded in attaining. Nothing caught on here either. The disco is a bit slicker here than the rather more funky stuff Roach portioned out on Get Out'a My Way, with ten string players and three background vocalists including Patti Austin, Vivian Cherry and Gwen Guthrie spicing up Houston's still undeniably soulful groove.

Out in front with Person here is trumpeter Cecil Bridgewater, who was previously heard on Houston's 1971 Prestige album Houston Express, and Paul Griffin (King Curtis, Aretha Franklin and on different tracks of Houston Express than Bridgewater). Also in the rhythm section are guitarist Bruce Nazarian, like Jimmy Roach, a Detroit native who probably also appeared uncredited on Person's two Detroit-recorded Westbound albums, bassist and Motown Funk Brother Bob Babbitt, New York studio drummer Allan (nee Alan) Schwartzberg and percussionist Lawrence Killian in his first appearance with Person (there's also Wildflower and The Nearness of You, plus a number of other Person productions on Muse). In the main, the program is rather disappointing. The hard funk of some of Houston's Westbound collaborations with Jimmy Roach is completely watered down here to a sort of "disco light," almost like a Muzak version of someone else's disco.

The string section and the vocalists are used unimaginatively and the songs never really pop enough to stick in the memory. It's salvaged, however, by Houston's typically robust playing. But even so, the tenor great never really claims any of these songs as his own. With the exception of his take on Natalie Cole's "Inseparable," a ballad that sounds tailor-made for Houston, Person seems out of his element here, more or less just noodling over the groove. If there are any stand-out tracks, the long title track, "Dancing Feet," featuring Houston's echoplexed solo and Ann Roach's interesting "Déjà vu" would rank somewhere in there. But these are just average strolls that seem to be missing something interesting to sweep a dancer on their feet or even get a jazz listener to pay attention. Surprisingly, Person even sounds misplaced on his honking yet rather too pedestrian cover of King Curtis' 1964 hit "Soul Serenade" (keyboardist Paul Griffin probably also factored on Curtis' original).

Mercury issued both a 3:35 edit of "Dancing Feet" and "Soul Serenade" as singles. Neither took off. Apparently, Person also covered Lou Rawls' 1976 hit "You'll Never Find another Love like Mine" during the recording of Pure Pleasure but it has yet to be issued. Jimmy Roach later reunited with Houston Person on Always On My Mind (Muse, 1985), where he contributed the funky little "Cutie Pie," one of the album's best tracks. Smooth has Pure Pleasure available for download on his incredible My Jazz World blog. 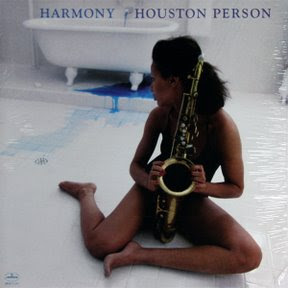 Harmony (Mercury, 1977): Despite the addition of high-priced session players, a horn section, more strings and more vocals, the second of Houston Person's two major-label albums was even less commercially successful than the first. That may explain why the tenor sax giant was never offered another shot at the big time. But Harmony is far more artistically satisfying to Houston's fans and beat heads combing Person's catalog for funky nuggets than many other Houston Person albums of the period.

Horace Ott, who first worked with Houston Person on Houston Express (Prestige, 1971 - and contributed "Nemo" from that session to Person's 1997-issued Island Episode) returns here as arranger, conductor and keyboardist (no doubt the one who gets the few keyboard solos heard here) to add a professional polish to what was clearly intended to be a commercial endeavor. From the album's opener, "Harmony, Perfect Harmony," one of The Four Seasons songs from the hit 1975 album Who Loves You, disco seems to be playing much more of a minor role here than what prevailed on the preceding Jimmy Roach productions. Keyboardist Paul Griffin and percussionist Lawrence Killian return from Pure Pleasure, aided by guitarists John Tropea and Jerry Friedman and the fantastic bassist Wilbur Bascomb, who was also on Person's funkier later albums Suspicions, Heavy Juice, Always On My Mind and We Owe It All To Love. Strangely, no drummer is credited here.

The album's odd opener, "Harmony, Perfect Harmony," isn't a great song or even a significantly harmonic one. But in Houston Person's hands, it turns into a reflective ballad that he ruminates ever so effectively upon. The man was born for ballads and, as he does elsewhere, makes this song his own. George Devens accompanies Person here on vibes - a sound the tenor player hasn't often featured in much of his own work - and even gets a welcome shot at a swinging solo. Barry Manilow's corny "I Write the Songs," a huge hit in 1975, even sounds almost meaningful in Houston's hands, despite the fact that neither Person nor Manilow, for that matter, wrote the song. Horace Ott contributes the little disco to be heard here with his easy-breezy "Do It While You Can" and funky-lite "Love Is All We Need," lifting Person up in his tradition of upbeat positivity.

Person's cover of influential Nigerian musician, composer and political activist Fela Ransome Kuti's "I No Get Eye For Back," which first appeared on Fela's 1975 album Alagbon Close, is not only this album's key moment (or 11 and a half glorious minutes, to be exact), but it is probably the single-most highlight of all of Houston Person's funk recordings. This rare groove - which was probably introduced to most of the CD generation on the generously sampled Move To Groove: The Best Of 1970s Jazz-Funk (Verve, 1995) - is a tour-de-force performance. Kudos to Person for covering it in the first place and props to the man for delivering it with the same emotionally philosophical fervor as Fela did in the original. Both Ott and Person are outstanding here and this performance is one to savor for all time.

Oddly, no singles resulted from this album. But the highly charged funk of "I No Get Eye For Back" has become a worthy cult hit - and probably an argument to get this album on CD somehow. While Houston Person did not dabble in disco after this, he wasn't ready to abandon the groove, as the excellent "Preachin' and Teachin'" from his next album, Wildflower (Muse, 1978), beautifully illuminated. Several funky forays followed before Person completely went over to the ballads he is known for today.

Person would later reunite with Ott, who, believe it or not, went on to craft the arrangements on all of the Village People albums and many of VP producer Jacques Morali's successful Can't Stop disco productions, on The Gospel Soul Of Houston Person (Savoy, 1978), a predictable album in the gospel tradition which boasts Ott's nice "Enjoy," Suspicions (Muse, 1980) and the little-known and hard-to-find We Owe It All To Love (Baseline, 1988). The two can also be heard together on The Leon Thomas Blues Band (Portrait, 1988) and Etta Jones' Sugar (Muse, 1989). Smooth has Harmony available for download on his incredible My Jazz World blog.
Posted by Douglas Payne at 11:40 PM

Houston Person recorded with Les McCann one album for a label, Greene Street (CTI) Records in 1984.

Did you know that you can shorten your long links with AdFly and get money from every click on your shortened urls.