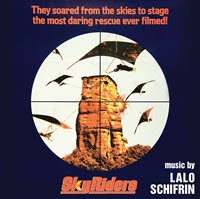 Sky Riders surely ranks among the least known of film composer Lalo Schifrin's 100 plus film scores. This 1976 film, which is not even currently on DVD, has gotten its first-ever soundtrack release on the composer's own Aleph label, some 33 years after the fact, while Schifrin's better-known or more desired scores for, say, Charley Varrick or St. Ives remain unissued. Sky Riders, directed by British director Douglas Hickox (1929-88), who was better known for directing Vincent Price's Shakespearean horror spoof Theatre of Blood (1973) and John Wayne's Brannigan (1975), is basically a kidnap story set apart by aerial shots of hang gliding, said to be something of a fad at the time. According to IMDb, Robert Culp (whose 1964 film Rhino was Schifrin's first American film assignment) plays Bracken, whose life seems perfect until his wife Ellen and their children are kidnapped by terrorists one day. After failed attempts to capture them back by the police, Ellen's ex-husband enters the fray and plans his own rescue attempt. James Coburn (whose films The President's Analyst and Harry In Your Pocket were also scored by Schifrin) plays McCabe, Ellen's ex-husband who hires a crew of professional hang gliders to help him rescue her and the kids from the terrorist's mountain top lair.

The music is typically good by Schifrin standards, but contains absolutely nothing outstanding. Not even a memorable main theme emerges. Recorded a mere month before Schifrin's fusion funk classic Black Widow (CTI, 1976), Sky Riders is anything but what liner notes writer Julie Kirgo claims as "the last, for a time, in that long, innovative line of jazz/funk-dominated scores with which Schifrin made his reputation." There is absolutely no jazz or funk to be heard here. It is a completely orchestral score from the first breath to the last, with no trace or evidence of a foot-tapping beat. Kirgo's claim, which is being used to promote this CD, is more appropriately applied to St. Ives, scored by Schifrin later that year. This Schifrin score, however, best fits into that style of sweeping symphonic scores that Schifrin had only recently begun exploring starting, perhaps, with 1974's The Four Musketeers.

Sky Riders benefits by a conservative use of the cymbalom ("The Terrorists," "The Last Kite"), set off menacingly by the piano's lowest realm ("The Terrorists"), a bouzouki and location-specific Greek folk themes ("Climbers," "Copters and Gliders" and "End Credits" - something he would explore in greater depth on 1979's Escape to Athena/Offside 7) and beautifully scored circus motifs in "Flying Circus" that prefigure Schifrin's own Rollercoaster later in the year. Notably, "Climbers" in particular accompanies the hang gliding scenes perfectly by combining pizzicato strings with swirling reeds and strings, highlighted by a low-brass riff Schifrin borrowed from his own "The Edge of Night" (from the Mannix soundtrack album). A brief snatch of the "Adagio" from Rodrigo's Concierto de Aranjuez can even be detected - on oboe, of all things - in "Copters and Gliders."

Like other Nick Redman produced CDs of Schifrin's scores, the Sky Riders soundtrack consists of several suites that marry short motifs and cues into one long song. Therefore, rather than 20 or 25 individual tracks, this soundtrack offers eight suites that range from two minutes to nine minutes in length. Fortunately, Redman pieced Sky Riders together less awkwardly than previous Schifrin soundtrack jobs and there's a sort of coherence that holds the whole thing together rather nicely.

Highlights: "Climbers," "The Terrorists" and "End Credits" (the closest thing to a main theme). Sky Riders, which will be issued on CD and iTunes on July 29, is hardly outstanding, but will be of interest to Schifrin's orchestral film-score fans.
Posted by Douglas Payne at 12:23 AM