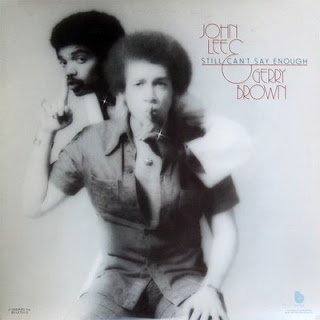 Bassist John Lee (b. 1952, Boston) and drummer Gerry Brown (b. 1951, Philadelphia) were a formidable duo in the 1970s, recording frequently and playing with some of the biggest names in jazz.

John Lee gigged around New York in the early 1970s with Joe Henderson, Pharoah Sanders and the Max Roach Quartet before relocating to Europe in 1972, where he met fellow expatriate, Gerry Brown. The two began working together in Dutch flautist Chris Hinze's fusion-oriented group, The Chris Hinze Combination.

By 1973, Lee and Brown had officially joined forces and recorded their debut album, Infinite Jones (Keytone, 1974, later reissued on CD as Bamboo Madness). The pair returned to America in 1975 and were invited to record for the prestigious Blue Note label, which by this point had unfortunately lost a lot of its luster and direction. Indeed, the John Lee & Gerry Brown duo was one of the last new acts the old Blue Note label signed.

Still Can't Say Enough is the third of four albums that were issued under John Lee & Gerry Brown's name and the second of their two Blue Note LPs (1975's Mango Sunrise was the first - the duo also appeared together on one cut, "Blue Note '76," with other Blue Note personnel that appears on the 1976 album Blue Note Live At The Roxy).

Produced by Skip Drinkwater (Norman Connors, Eddie Henderson, Lee Ritenour) and probably recorded in both Los Angeles and New York, this 1976 album is squarely in that lush terra firma where jazz, rock and funk co-exist in equal and expert measure. It's a perfect fusion - and a particularly strong reminder of just how good jazz fusion could get (I would rank Tom Scott and the L.A. Express and Jeff Beck's Wired up here too).

As players, Lee and Brown make for a mighty rhythm machine. They don't flinch in laying down an enveloping groove. Lee sometimes suggests a cross between Stanley Clarke and Anthony Jackson with a dash of Gordon Edwards and Gary King added for just the right touch. Paired with Brown, who is a world of influences from Tony Williams and Billy Cobham to Steve Gadd and Harvey Mason, it makes for one of the period's best and strongest jazz engines.

Joining Lee and Brown here are Reggie Lucas and Ray Gomez on guitars, Hubert Eaves, Harold Ivory Williams IV and Rob Franken on keyboards, Ian Underwood on synthesizers and Mtume on congas and percussion. A horn section is peopled with such jazz royalty as Randy Brecker and Jon Faddis on trumpets, Michael Brecker and Ernie Watts ("Funky Row") on tenor sax, David Sanborn and Gary Bartz on alto sax, Barry Rodgers on trombone and Ron(nie) Cuber on baritone sax.

A vocal section including Lonnie Liston Smith's brother Donald, Tawatha Agee and C.P. Alexander are featured unobtrusively on "Love the Way You Make Me Feel" and "Talkin' 'Bout The Right One," which also features Gary Bartz.

The program is dominated by John Lee's strong compositions, with the hard-driving "Rise On" (with features for Randy and Michael Brecker) listed here as by Gerry Brown - although the pair recorded the song on Infinite Jones, where it was credited to John Lee.

Here, keyboards - probably Rob Franken's synthesizers - often state the melody or the countermelody and rip-roaring guitars counteract with some startlingly fierce solos. As a writer, Lee is engagingly melodic with enough backbone to remind you that rhythm is his business, particularly on "Freeze It Up," "Funky Row," "Strut 'N' Get Up" (a feature for David Sanborn and Michael Brecker, who solos), the Stuff-like funk of "Down The Way" (featuring David Sanborn and Michael Brecker solos) and the seemingly edited "Out the Box" (featuring Ernie Watts), which is little more than just a funky vamp, but like what precedes it, is truly funky nonetheless.

In an effort to court the profitable disco market, "Strut 'N' Get Up" was also issued as a 12-inch dance single to DJs (backed by "Freeze It Up"), but not extended or remixed in any way to make it worth tracking down in addition to the LP, which you have probably guessed by now, has never seen the light of day on CD.

After recording the above average Chaser (Columbia, 1979), a rock solid fusion that inevitably enters a bit of disco into the mix, John Lee and Jerry Brown finally broke up in 1981 to pursue other musical interests. Lee joined McCoy Tyner's quartet in 1982 and then, in 1984, joined Dizzy Gillespie and recorded and toured with the jazz icon until he was taken ill in 1992. Today, he is the program director for "Dizzy: The Man and the Music," the official concert and clinic program celebrating Gillespie's life and work.

Brown gravitated toward the pop music end of the spectrum, touring and recording with Jeffrey Osborne, Chaka Kahn, Philip Bailey, Lionel Richie, Lenny Kravitz and, most notably, held the drummer's chair in Stevie Wonder's band for 14 years. Brown has done a lot of film and TV work too, especially with Stanley Clarke, and has lately been heard with Bobby Womack, Diana Ross, Byron Miller and Stanley Clarke.

You can download the excellent and curiously-titled Still Can't Say Enough with thanks and kudos to Smooth from his fantastic My Jazz World blog.
Posted by Douglas Payne at 10:23 PM

Great article. Have owned the two Blue Notes and Chaser for a number of years now but will have to look out for Infinite Jones.