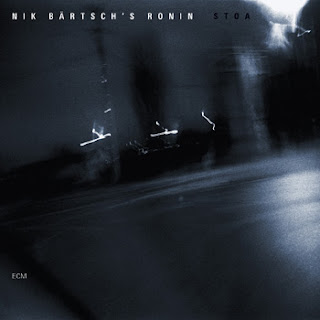 Repetition has a long, revered history in music, from many of the world's folk songs - particularly in Indian and Asian cultures - to the 20th Century classics of Phillip Glass, Wim Mertens and Steve Reich. In jazz, these musical patterns or compositions are referred to as "ostinato" - although since this music ends up sounding like funk or something criminally catchy or critically annoying, jazz never gives the music the respect it deserves.

Oddly, though, the repeating patterns of ostinato music often build an attractive, hypnotic feel that can inspire provocative improvisation - especially in the hands of someone who knows what to do with it. Ostinati is not about proving one's chops, showboating or personalities. It's about the music. Ostinati shows how musicians can work within a song, building the music like an intricate puzzle, mirroring or reflecting a theme, playing to patterns and even discovering alternatives that invert, subvert or illuminate the pattern.

No one understands this more or better than pianist and composer Nik Bärtsch (b. 1971, Zürich), who has devised a most wonderful disc with Stoa (2006), the first of his two ECM discs to date (he's issued several other Ronin discs on his own label prior to this). The title is Greek for covered walkways in ancient architecture meant for public usage. Or, as Bärtsch's notes succinctly and sufficiently state, these "pieces are spaces to be entered and inhabited." How beautiful is that?

This is his seventh (!) outing in what he calls "ritual groove music" and one could hardly argue or refute this. He further indicates that his music "draws its energy from the tension between compositional precision and the self-circumvention of improvisation." Indeed. It's a definitive concoction that straddles the emotions prevalent in both jazz and film music, which, lest we forget, also employs repetition for dramatic and emotional purposes (note Stanley Kubrick's Eyes Wide Shut or John Frankenheimer's Ronin for brilliant and superb examples of the musical crossroads where one might find music like Stoa).

Nik Bärtsch's Ronin evinces a particularly tight quintet featuring the leader on piano (and sporadic Fender Rhodes in some background soundscapes), Sha on contrabass and bass clarinets, Björn Meyer on bass, Kaspar Rast on drums and Andi Pupato on percussion. The group elaborates effectively on Bärtsch compositions with such seemingly academic titles as "Modul 36" (the disc's best 15 minutes), "Modul 35" (the least convincing piece on display here), "Modul 32," "Modul 33" and "Modul 38_17" (an utterly intoxicating and excellent piece of chugging funk that sounds nothing like funk).

All of these pieces were apparently conceived while Bärtsch was briefly living in Japan, a lifelong dream of his. There is something of the mystery and the beauty of Japan in this material, but it never sounds specifically Japanese by any stretch of the imagination. It actually sounds like nothing less than pure imagination at work.

There is no sense of erudite predictability or Jarrett-like leanings that you'd assume would be typical of any piano-based ECM date either. This is very soulful music and even though I've just discovered it some three years after the fact, it will make many repeated visits to my CD player. It would have been my favorite disc of 2006 if I had heard it then. But it's the best thing I've heard since then.
Posted by Douglas Payne at 11:00 PM