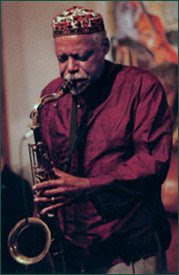 My musical tastes often find me going through phases where I become obsessive about a particular artist. Recently I have been obsessing over pianists John Hicks and Alice Coltrane (also an organist and harpist). One of my other recent obsessions is Freddie Hubbard. Inspired by the recent (Japanese) CD release of the trumpeter's 1979 album The Love Connection (Columbia), I was revisiting Hubbard's many other LP and CD treasures in my collection. Then word comes that Freddie Hubbard died on December 29.

Now, spurned by a review I wrote of David Newman's recent Diamondhead (HighNote), I've also been recently revisiting my voluminous Fathead collection - even picking up out-of-print CDs I passed on years ago (Return To The Wide Open Spaces, Bluesiana Triangle, Bluesiana II and Under A Woodstock Moon) to bask anew in the joy of his playing. Then comes word today that tenor great David "Fathead" Newman passed away at the age of 75 on January 20, 2009, following a bout with pancreatic cancer.

What's saddest to me about this is that there is always something so life-affirming and joyful in Fathead's music, in any bag, on any instrument. It's hard to fathom that beautiful sound silenced forever. Strangely, Newman's death comes only days after the January 15 death of Leroy "Hog" Cooper, Newman's fellow bandmate in the Ray Charles band (special thanks to Cooper's friend and biographer, Susan Cross, for this sad news).

David Newman was born February 24, 1933 in Corsicana, Texas, later moving to Dallas, where he grew up. He earned his seemingly unflattering nickname from a music teacher who chided the young player for always hitting the wrong notes. Somehow, he got over that, joining Ray Charles's band in 1952 as a baritone saxist. He later switched to tenor sax, for which he developed one of the most distinctive tones known to jazz. He also played alto sax and flute with equal distinction. Newman stayed with Ray Charles for the next 14 years, but began his own solo career in 1960 with his debut album Fathead (Atlantic).

After leaving Charles, Newman started doing a lot of session work, appearing on albums by Aretha Franklin, King Curtis and many others, and devoting more time to his solo career. He also joined Herbie Mann's band in the early 1970s, while he turned out a number of excellent Atlantic albums under his own name.

My first exposure to David Newman was when I happened to pick up his 1971 album Captain Buckles (Cotillion) for two dollars at a used record store in 1985. It startled me then and remains to this day my very favorite of his many records. The album features a higher-than-usual number of Newman originals (always the best part of a Fathead record - "Captain Buckles," "Joel's Domain," "The Clincher" and "Negus"), a first-rate line-up of soul-jazz musicians (Blue Mitchell, Eric Gale and Bernard Purdie) and an expert sampling of Fathead on tenor, alto and flute.

While none of Newman's other Atlantics (1960-74 and two from the late 1980s) are as superb as Captain Buckles, all are consistently good with at least a few notable examples of intoxicating musicianship, catchy songs or that generally soulful beauty that Fathead brought to every occasion.

Fortunately, David Newman recorded prolifically and the CD age has been pretty good to him too. Additional Fathead highlights include the funky Front Money (1977, which has been issued on a Collectables disc with Captain Buckles), the straight-ahead Resurgence! (1980) (perfectly coupled with 1982's Still Hard Times on the 32 Jazz CD Lonestar Legend) and nearly all of his nine HighNote CDs since 1999, most notably Keep The Spirits Singing (2001), Song For The New Man (2004), Cityscape (2006) and the most recent, Diamondhead (2008).

I also recommend Fathead's wonderfully intoxicating sparring with Herbie Mann on the flautist's Mississippi Gambler (Atlantic/1972) and his many appearances with the recently deceased organist Jimmy McGriff, particularly the Newman compositions on the organist's 1997 CD The Dream Team (the excellent "McGriffin'") and 1998's Straight Up ("Straight Up" and "Brother Griff").
Posted by Douglas Payne at 3:54 PM

Really love this post! I was a really big fan of David Newman. Why don't you come and check out my posts. if you love Geography then you will love my blog.