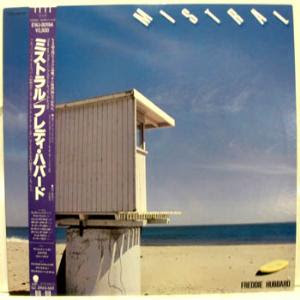 Freddie Hubbard waxed many high-caliber yet shamefully forgotten records for Columbia from 1974 to 1979. Remarkably, none of them sold particularly well - which is why he was dropped by the label in 1980 - and today, too few are to be found on CD. Mistral, recorded in September 1980, is the first studio album the trumpeter recorded after leaving Columbia and in many ways continues heading down the path he charted while there. Maybe that's why this excellent album is also a footnote buried deep in the trumpeter's legacy. It's never been issued on CD either.

Recorded for the Japanese label East World (and later issued in the US by Liberty, an EMI label hardly known for issuing jazz), there is a slick West Coast feeling to this album that's as endearing as it is enjoyable. Perhaps it is the addition of legendary West Coast alto saxist Art Pepper into a mix that finds pianist George Cables, bassist Stanley Clarke and drummer Peter Erskine in the rhythm section. All the tunes have a relaxed, laid-back feeling (what Scott Yanow snidely refers to as "no one sounds like they're sweating"), even on the up-tempo "Bring It Back Home." While there is a casual air of familiarity in the program, all involved sound as if they are enjoying themselves and each other's company.

Hubbard has never sounded better. His playing is confident, definitive, nearly poetic, and his engagements aren't limited merely to Pepper, who seems to be just another guy in the band here. Hubbard is musically caressed by the pianist, his old comrade George Cables, but is more notably poked, prodded and provoked by bassist Stanley Clarke, who is simply outstanding here, doing things throughout that are worth paying attention to.

The album opens with Clarke's pretty "Sunshine Lady," a prototypical fusion number, circa 1980, which probably leads most people to wrongly assume the rest of the album is going to go this way. While this track was probably devised to capture radio airplay, it's not what the rest of the record is all about or where the album takes you.

Hubbard contributes three originals ("Eclipse," "Now I've Found Love" and "Bring It Back Home") to the program while the group waxes an original apiece from Cables and Clarke and covers Cole Porter's "I Love You." George Cables' evocative minor-keyed Latinate-light "Blue Nights" is one of the album's highlights, showcasing beautiful turns by Hubbard, Cables, Pepper and, most notably, an especially melodic solo from Clarke.

Another highlight is Hubbard's funky "Bring It Back Home," which surprisingly never caught on. It's one of his trademark jam themes (and a perfectly structured set closer) that provides a palette for inspired improvisation. In this case, Hubbard, Pepper, trombonist Phil Ranelin, Cables and Erskine/Clarke all get a shot and solo beautifully.

Hubbard's acoustic ballad "Eclipse" is another one of his features that surprisingly never caught on. Very much in the "Maiden Voyage" tradition, this number features particularly lovely turns by Pepper, Cable, Clarke (suggesting a whole history of Hubbard appearances) and Hubbard himself on flugelhorn.

From here, Hubbard would head toward more traditional straight-ahead, neo-bop type recordings - "real jazz" - even repudiating his commercial albums like Mistral as "not clean" (see the notes to Hubbard's Outpost, recorded only six months after this record). That's pure tosh. There is much great music on these records, and much great Hubbard to hear, especially on Mistral.
Posted by Douglas Payne at 3:02 PM

I only bought this LP last year but have to agree that it is a great listen.