Pianist Cedar Walton has been a tremendous accompanist to scores of jazz soloists and singers. From the late 1960s on he's also actively recorded under his own name. This is due not only to his prowess as a perfect pianist for any occasion but his ability to expertly craft some of jazz's best and better-known themes. Walton's recording opportunities ramped up in the mid-1970s when he formed The Magic Triangle, a remarkable working group featuring tenor saxophonist Clifford Jordan.

Around this time he was awarded (and accepted!) a contract with his first major label, RCA, where he recorded two forgotten fusion-oriented albums. As the 1970s progressed, Walton formed a neo-bop group he called Eastern Rebellion that found some success - especially in Europe - and in 1978 won his second (and final) major label contract with Columbia Records, where he recorded two notable, yet little-known albums, Animation (1978) and the even lesser-remembered Soundscapes (1980). Neither has ever shown up on CD, but both sound very much a part of the pianist's recorded legacy.

Whether it was intended or not, Animation has a tendency toward being slightly Latin. It makes for a pleasing consistency. But the album benefits most from the small group Walton's assembled with Bob Berg (also from Eastern Rebellion) on tenor sax, Steve Turre on trombone, Tony Dumas on bass, Buddy Williams or Al Foster on drums and (the probably overdubbed and almost unnecessary) Paulinho da Costa on percussion.

Despite any preconceptions, this tinny-sounding recording remains firmly rooted within the jazz camp. While Berg gets the lion's share of solos here, after Walton of course, the bassist and the drummers get much of the credit - or, depending on your point of view, the blame - for the infectious groove that's laid down here. It's not quite disco. But it's not exactly bebop either. They weren't dumbing down the sound as much as trying to make it more palatable (cooler?) than they would if they were recording this stuff for the Steeplechase or Muse labels, where Walton recorded before and after these sets.

Walton himself arranges the record with a panache that convinces the listener that a bigger band's at play. But he shines the spotlight on himself for some keyboard work that is well worth hearing. He's mostly on electric piano here, but keeps the acoustic keyboard in the forefront of "Charmed Circle," "Precious Mountain" and "March of the Fishman" (he overdubs the electric piano for "Another Star" and "Ala Eduardo" but uses the acoustic piano to help lay the rhythm down).

Walton is no hack on the electric keyboard - quite the opposite in fact - but he never really develops the personality others provided to the instrument during its heyday. He resembles Dave Grusin a bit on "Jacob's Ladder" and Bob James on "Another Star." But these are just turns of phrase. He does tend to develop ideas and ascend the hill a bit further than either one of those pianists ever has.

The program consists mostly of Walton compositions, with the at-the-time requisite Stevie Wonder cover (the better-than-average cover of "Another Star") and bassist Tony Dumas' very Walton-like "If It Could Happen" (which features Dumas' only solo on the record).

Unless Walton changed the name of these tunes somewhere along the way, only "Jacob's Ladder" and "Precious Mountain," which both show up on Walton's 1995 Eastern Rebellion disc Just One Of Those Nights At The Village Vanguard (MusicMasters), maintained any kind of place in the pianist's playlists. Highlights here are bountiful and all in the middle of the record: "Jacob's Ladder," "Charmed Circle," "Another Star" (yes, "Another Star"), "Precious Mountain" and "March of the Fishman." 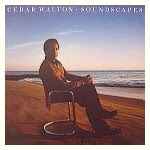 The little-known Soundscapes, which followed shortly after Animation, maintains the same basic group as before but, rather significantly, adds Emanuel Boyd's flute on five of the LP's six pieces (he also solos on "Latin America" and "Naturally") and an additional percussionist, Rubins (sic) Bassini on four cuts. The flute, coupled with Bob Berg's tenor and Steve Turre's trombone, adds something special to many of the album's melodies.

A further attempt at crossing over is also particularly evident on Soundscapes with the addition of strings on the only three pieces where Walton mans the electric piano ("Warm To The Touch," "N.P.S." and "Sixth Avenue"). The lead cut, "Warm To The Touch," also features a (typically strange) vocal by Leon Thomas - though you would never know it by reading the back cover of the album - and background vocalists and catches bassist Tony Dumas, who pounds the electric bass throughout the rest of the LP, taking a beautiful solo on the upright bass here. Trumpeter Freddie Hubbard adds a bit of class to the LP's second cut, "The Early Generation," but unfortunately figures nowhere else on the record.

Again, Walton's talent for light-as-air arrangements comes to the fore here. They are tastefully simple and playfully clever, often even undeniably catchy. They do well to highlight his remarkable playing and that of the others too. Walton's solos are impeccable - as always - though he does seem to suggest more "popular" pianists on several occasions: he sounds like Bob James on "Sixth Avenue" and, remarkably even like Ramsey Lewis on Tony Dumas' very Larry Dunn-sounding "Naturally." Other soloists get their say too. Bob Berg gets the most notable solo space on the record (five titles), though he is firmly rooted in Michael Brecker territory here. Trombonist Turre even takes a couple of nice solos worth noting ("Warm To The Touch" and "Sixth Avenue").

The program seems to suggest a can't-lose line-up of strong melodies that should have had some impact - but didn't. "Warm To The Touch" isn't exactly radio-friendly, but really comes to life when the instrumentalists have their say. "N.P.S." - which sounds like something well known that can't be placed (and which Walton also covered on his 2001 CD The Promise Land) - is one of the album's highlights. So is "Latin America" - another of Walton's Latinesque numbers, which the composer also covered on his 2002 CD Latin Tinge (also featuring Ray Mantilla) - and "Sixth Avenue," which Walton has recorded quite a few times since this. However, each of the songs, each over five minutes in length (something jazz people like), seem to go on too long. Maybe the solos could have been shorter. Maybe Walton could have featured less soloists on each piece. Who knows. Each song starts off interestingly enough but after the first solo, the idea just seems to have run its course (particularly true of "Naturally").

But in any event, it's tremendously exciting to hear Cedar Walton in a more electric bag than he's known to be elsewhere. He recorded on a horridly prehistoric electric piano for a few of his early Prestige sides, and of course during his also little-known RCA albums, but was never heard electrically again after these two Columbia dates. For that reason alone, Cedar Walton's Columbia dates are notable. However, the real joy of these records - as imperfectly as they may have been recorded - is hearing Cedar Walton's too-little celebrated genius for impeccable arrangements. One listen to these two records is to hear a master generating a big sound out of a small band.

This is awesome thank you so much!

Do you happen to know anywhere online we can find these albums?

yes ebay, gemm, or other blogs