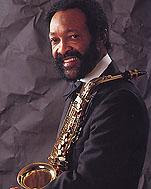 What a terrible month for jazz this has been. Alto sax giant Hank Crawford has now left us and gone on to that great band up in the sky - nine days after fellow Ray Charles band-mate David "Fathead" Newman, 14 days after another fellow Charles section man, Leroy Cooper, and exactly one month to the day following another musician who, like Crawford, helped set the tone for the CTI label in the 1970s, Freddie Hubbard. Jazz also lost Hank's musical partner, Jimmy McGriff, in May 2007, and Ray Charles, of course, left this planet in 2004.

Hank, or "Bennie" as he was born and known early in his career, was 74 and passed away quietly in his Memphis home on January 29 (thanks to my great friend Arnaldo DeSouteiro for passing this sad news along to me). Crawford was another of jazz's distinctive soloists and recorded scads of albums until his stroke in 2000. With an unmistakable wail of the blues, "so full of emotion and poignancy," as All Music Guide's Thom Jurek beautifully states, Crawford made a huge impact on music, especially the soul jazz he contributed so much to.

Born in Memphis, Tennessee, on December 21, 1934, Crawford got his start in music playing piano. He eventually switched to the alto sax and in high school, he befriended Phineas Newborn, Jr. (he'd record with his brother years later), Booker Little and George Coleman. Upon graduating, Crawford played in bands fronted by Ike Turner, B.B. King, Junior Parker, and Bobby "Blue" Bland. In 1958, Crawford went to college in Nashville where he met Ray Charles. Charles hired Crawford as a baritone saxophonist, but eventually he switched to alto. He remained with Charles' band - becoming its musical director - until 1964.

He recorded many albums for the famed Atlantic label over a full decade, starting with his 1960 debut, More Soul, featuring both Newman and Cooper and one arrangement by Charles, his boss at the time. He started recording for Creed Taylor's soul-jazz label, Kudu in 1971, staying until the label's end in 1978, recording a few hits along the way, including I Hear A Symphony (1975), his first of four well-conceived meetings with arranger David Matthews. By 1982, he signed with the Milestone label, where he recorded for the remainder of his solo career, including six titles co-led with organist Jimmy McGriff (the pair also recorded two rather laconic titles for the Telarc label in the mid-1990s), ending with the oddly-titled The World Of Hank Crawford (2000).

Hank Crawford never made the perfect "must have" album, but his music was always utterly soulful and never less than 100% sincere. He came close a few times, most notably on It's A Funky Thing To Do (1971), Don't You Worry Bout A Thing (1974), I Hear A Symphony (1975 - I had the great privilege to write notes for a Japanese release of this album several years ago), Tight (1996) and most especially on one of my favorites, Tico Rico (1977). He also recorded notable material with the CTI-like Versatile label in the late 1970s and is heard to good effect on Grant Green's final album Easy (1978) and one of his own, Centerpiece (1979). One of the best - and my favorite - ways of hearing Hank is on his very first and little-known foray with Jimmy McGriff on the organist's 1978 LRC album Outside Looking In, which for the most part (one track is missing) was issued on a now out-of-print but highly worthwhile CD titled Jimmy McGriff Featuring Hank Crawford (LRC CDC 9001). As an aside, he and Newman often worked together throughout their careers and can be heard together on a bunch of discs under both their names.

I would also recommend checking out these other songs to hear the beautiful soulfulness of Hank Crawford: "It's Too Late" from Johnny Hammond's Breakout (1971), "Corazon," "Mr. Blues" and "Good Morning Heartache" from Wildflower (1973), "Big Sur Suite" from Johnny Hammond's Higher Ground (1973), "Down on the Deuce" and "Survival" from Down On The Deuce (1984), "River's Invitation" and "Something For Bubba" from Steppin' Up (1987) and "Jimmy's Groove," "Tuff" and"Hank's Groove" from On The Blue Side (1989) - a sound that jazz will sorely miss.