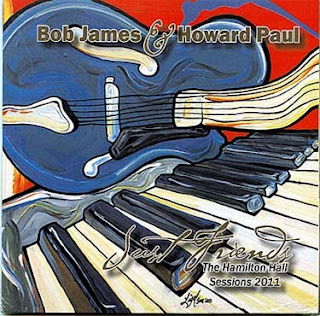 This surprising stroll through the Great American Songbook comes courtesy of pianist and two-time Grammy award winner Bob James and seven-string guitarist Howard Paul. Recorded in early 2011 at Hamilton Hall, overlooking the Savannah River, in Savannah, Georgia, this acoustic pairing of two kindred spirits revels in its warm and engaging format and reveals a mutual love for great melodies and beneficially interactive creativity.

What will surprise many is that the pianist, an avatar of ‘70s fusion and one of the long-reigning lords of smooth jazz (as co-leader of Fourplay), contributes no originals to the program and sticks to acoustic piano throughout. Additionally, it’s likely that he hasn’t played many of the songs heard here since the very beginning of his career, when he was discovered by Quincy Jones and given his first break in the music accompanying Sarah Vaughan (where he spent much of the 1960s).

Savannah native Howard Paul has maintained something of a double life. After years in the military and in business, he has played clubs, campuses and festivals around the world with such guitar greats as Bucky Pizzarelli, Howard Alden (both seven-string players themselves), Joe Beck, Jimmy Bruno and has recorded with such jazzers as flautist Ali Ryerson. He also partnered with renowned guitar maker Bob Benedetto to form Benedetto Guitars, Inc., a jazz guitar manufacturing company based in Savannah, Georgia. In addition, he holds down a Monday Night gig at the Jazz Corner club in Hilton Head, South Carolina, where he has performed regularly since 2003.

The obvious model here are the two piano-guitar duo albums recorded by Bill Evans and Jim Hall some half century ago, Undercurrent (United Artists, 1962) and Intermodulation (Verve, 1966). But, together, Bob James and Howard Paul evince little similarity to the earlier duo aside from the pairing of a pianist and a guitarist.

Despite the fact that both Bill Evans and Jim Hall recorded or performed most every song here except “I Only Have Eyes For You” and “Moon River” (in both cases) as leaders or session players, Just Friends doesn’t replicate any of the Evans/Hall programs. And although the pianist has repeatedly paid loving tribute to Bill Evans, Bob James sounds nothing like Bill Evans. Howard Paul certainly sounds nothing like Jim Hall.

They do, however, sound utterly lovely together.

James has rarely sounded this reflective and enthused. Despite the war-horse status of much of these tunes, the pianist doesn’t sound like he’s beating a dead horse so much as he’s looking to ride them the way that mutually suits the horse and the rider. Here is a musician who in the past has been accused of crafting pretty statements that say nothing, proving that he not only knows his way around a melody but is confident of getting his piano to celebrate a good tune with honor and distinction.

Perhaps that is due to simplifying his inspiration to what has always been his musical muse: a good guitar. This is the first full disc featuring Bob James with only one other instrumentalist and, of course, the instrumentalist had to be a guitarist. As far back as the fusion days, James’s piano was best balanced by a strong guitarist. In those days it was Eric Gale. James later found inspiration – and several albums - in the more acoustic travails of Earl Klugh. Later still, Lee Ritenour, a fellow co-founder of Fourplay, propelled the pianist into interesting territories. This was recently confirmed again on Botero, James’s recent disc with the commanding Asian guitarist Jack Lee.

Guitarist Howard Paul seems to call up a host of influences, mixing a style that recalls the not-too-distant past of Jim Hall and Kenny Burrell (and sometimes Wes Montgomery) marked up with a refreshing twist of contemporary modernity that merely suggests Pat Metheny. If rock and R&B or any of its storied guitarists have ever influenced Howard Paul, he surely doesn’t reveal it in his playing. But that’s not to say he’s old fashioned. Paul is driven by the melody and he’s as much a catalyst for James as he is someone who knows how to charm with guile when it’s his turn in the spotlight - a glow that would be set on the moodiest setting available.

Together, Bob James and Howard Paul make for a superb match. They have crafted their alternating leads perfectly (except on “Moon River,” taken as a particularly gorgeous solo for piano). Neither gets in the other’s way and even the behind-the-solo comping is light and airy. Neither shout their proclamations and both sound genuinely excited to hear what the other will come up with next.

There’s not a dud or a dull moment on the program, though the pair reaches a certain apex toward the middle of the program with the especially enchanting “Out of Nowhere.” It’s interesting to also consider previous recordings Bob James has made of some of these songs, including “Alone Together,” heard on the pianist’s 2001 album Dancing on the Water, “Autumn Leaves,” featuring the pianist on Fender Rhodes for Chet Baker’s 1964 CTI album She Was Too Good To Me, “Georgia on my Mind,” arranged by James for Grover Washington, Jr.’s 1971 Kudu album Inner City Blues, and “Moon River” (which, shockingly, doesn’t even give Henry Mancini credit here), which James performed with Sarah Vaughan on her 1965 album Sarah Vaughan Sings The Mancini Songbook.

Johnny Mandel’s “Emily” and the appropriately included ‘30s era standard “Just Friends” are additional highlights to the bewitching program Bob James and Howard Paul have put together here, one apparently fueled by fine wine and one that nearly demands a good wine to properly enjoy. Just Friends is just like fine wine, smooth yet substantial and full bodied yet flavorful. CD available at cdbaby.
Posted by Douglas Payne at 11:27 PM