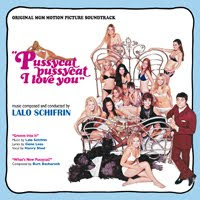 Five years later, for whatever reason, a sequel/remake was released called Pussycat, Pussycat, I Love You - a title derived from Hal David’s lyric to “What’s New Pussycat?" - with a decidedly less-than-stellar cast featuring Ian McShane, John Gavin, Severn Darden and Joyce Van Patten and, subsequently, stirring little interest from any of the folks who enjoyed the earlier film, or the audience the film’s producers apparently no longer understood.

With Burt Bacharach otherwise engaged, disinterested or unaffordable, composer Lalo Schifrin was contracted to craft the new Pussycat score. Fresh from his film successes for The Fox (1967), Cool Hand Luke (1967), Bullitt (1968) and well-known TV themes to Mission: Impossible, Mannix and Medical Center, Schifrin must have seemed like a sure thing.

Indeed, Schifrin crafted a terrifically delightful score that offered what producer Lukas Kendall called “a broad palette for musical pastiches—from Italian opera to a comic German march to a Morricone-style spaghetti western anthem.” Schifrin’s score is crafted much like a road movie, taking in musical forms from all over the globe, featuring clever (and comical) reconsiderations of Bacharach’s wacky “What’s New Pussycat?” and even offering a musical punch-line that references the composer’s own famed “Mission: Impossible.”

The mood is light and light-heartedly comic and not terribly dissimilar to what Henry Mancini crafted for Blake Edwards’ The Party (1968). But Schifrin’s score offers a number of delightful pieces that rank among some of his best. Pussycat, Pussycat, I Love You rounds out Schifrin’s earliest period of film scoring, which dates roughly from 1964 to 1970, where his deft touch and melodic jazz skills still informed his very best work – regardless of musical or filmic genre.

Nobody reading this now needs to be reminded that Pussycat, Pussycat, I Love You was a box-office flop that disappeared quickly and was immediately forgotten. A 16-track album was prepared and at least one single (“Pussycat, Pussycat, I Love You” b/w “What’s New Pussycat”) was issued. It’s possible that Henry Shed’s performance of “Groove Into It” was also issued as 45-rpm single, but maybe only as a promotional single - and in very limited quantities (I've never seen a copy of this anywhere). But the film’s lack of success prevented United Artists from issuing an album at the time.

It wasn’t until 2008 that Film Score Monthly included Lalo Schifrin’s entire 59-minute score for Pussycat, Pussycat, I Love You - including the 16 tracks scheduled for the LP from the film’s original soundtrack – on its magnificent 12-disc box set The MGM Soundtrack Treasury, a CD set that featured full score soundtracks for 20 MGM films. Unfortunately the expensive set was limited to 1200 copies and very quickly sold out.

Now in 2011, the Spanish Quartet label has properly paired Pussycat, Pussycat, I Love You on a two-disc set with the full film score to the earlier What’s New, Pussycat?. But, like the MGM box, this set is limited to only 1000 copies. So if this is something you want, you’d better hurry up and get it while you can.

The less said about What’s New Pussycat?, which also features performances by Dionne Warwick and Manfred Mann, the better. The Quartet set is worth owning for Lalo Schifrin’s terrifically interesting score to the otherwise (best) forgotten film Pussycat, Pussycat, I Love You.

Schifrin crafts any number of memorable themes here, including go-go/beat/shake tunes like “The Guru,” “Fred’s Theme” (the instrumental version of “Groove Into It” and the great bossa/Tijuana Brass variation, “Top Down”) and “Flashing Lights;” “Hydro-Therapy” (which recalls the Mannix soundtrack’s “The Edge of Night”); the Asiatic “Oh Perfidy” and “Holes” (also “You Think of Everything” - suggesting what the composer did with Cal Tjader’s “Hot Sake” and his own “A Taste of Bamboo” from Gone With The Wave); the lovely and lounge-y “Pussycat, Pussycat, I Love You” (aka “Millie,” “Ornella,” “Sauna Bath,” “Duplication”), the after-hours “Pussycat Source” (which sounds as if it was scored in a manner matching a cue from Krysztof Komeda’s score to Rosemary’s Baby) and the charming “False Fronts.”

The Quartet set presents pretty much the exact same program as the MGM box did, but in a slightly different order. The MGM box presented the music in film order. The Quartet set, helmed by the great Claudio Fuiano, begins by presenting the 16 tracks intended for the LP release, following these tracks with the remainder of the score in mostly filmic order.

However, the Quartet set incorrectly attributes "Holes" as "Hales" (track 34) but does not use the music from this track here. The actual track credited as "Hales" is "What's New Pussycat/Indian Camp" (track 19 from the MGM box, which is also presented as two separate tracks on the Quartet set, tracks 8 and 27).

It’s worth noting that Lalo Schifrin recorded a version of “Groove Into It” (with lyrics by famed jazz writer and lyricist Gene Lees) in Hollywood a full month before the November 1969 London sessions that resulted in the soundtrack recording of Pussycat, Pussycat, I Love You. Musicians featured on this version included Don Randi and Joanne Grauer on keyboards, David Cohen and Dennis Budimer on guitars, Buddy Clark on bass, John Guerin on drums and Alan Estes on percussion. It’s unknown whether this version included a vocalist.

But to my knowledge, this version has never been issued anywhere in any form and is not included on either the MGM box or the new Quartet set.

Still, What’s New Pussycat? is perfectly paired with Pussycat, Pussycat, I Love You here and is worth getting for Lalo Schifrin’s score alone. There’s enough here to please fans of Lalo Schifrin’s early film scores, good film music and for film music that’s more memorable than the film it accompanies.
Posted by Douglas Payne at 10:52 PM

I'm confused what you mean by "the less said about What's New Pussycat?...the better." Burt Bacharach's score is one of the most delightful comedic efforts of the sixties. It easily rivals anything by Mancini or Hefti, with Bacharach acting as a sort of surrogate Mancini for Peter Sellers, continuing with "After The Fox" and "Casino Royale," both further proof of Bacharach's comedic film scoring genius.