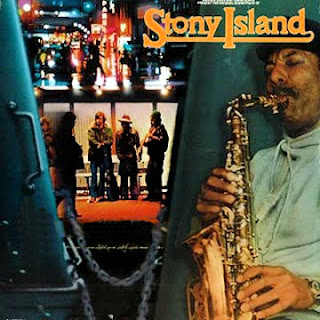 This little-known and even less seen film is about a bunch of poor kids from Chicago’s roughest neighborhoods trying to make it as musicians. Sure, this 1978 film suggests any number of more successful films that followed, notably both the Alan Parker films Fame (1980) and The Commitments (1991). But for some reason the world wasn’t ready for this sort of thing in the glitzy days of Grease and Saturday Night Fever - or even Rocky - all similarly like-minded hard-luck stories of the lower classes fighting their way out of their condition with the talent they possess.

The film was directed and co-written by Chicago native Andrew Davis, who went on to direct a bunch of popular action flicks starring Harrison Ford (The Fugitive), Steven Seagal (Above the Law, Under Siege) and Arnold Schwarzenegger (Collateral Damage). Davis’s co-writer here is Tamara Hoffs, mother of The Bangles’ Susanna Hoffs and later to become a producer and director in her own right.

Included in among the cast is a number of real Chicago musicians – whose lives probably mirrored the roles they played – as well as Rae Dawn Chong (daughter of Cheech and Chong’s Tommy Chong) in her feature film debut, Andrew Davis’s songwriter brother Richard Davis (as Richie Bloom) and even 19-year-old Susanna Hoffs, in her film debut, predating her Ming Tea performances in the Austin Powers films by nearly two decades.

A soundtrack to the film was issued by the Florida-based T.K. Records subsidiary “Glades” (7516). The Henry Stone-owned T.K. Records, it should be remembered, was one of the high houses of disco back in the day, hosting a myriad of successful acts including K.C. and the Sunshine Band, T-Connection, Jimmy “Bo” Horne, Peter Brown and several crossover jazz acts on the T.K.-distributed LRC label, including Lonnie Smith, Jimmy McGriff and Joe Thomas.

The above noted pieces are all credited to the “Stony Island Band,” which is supervised by the legendary Gene Barge, an early R&B saxophonist and, later, a composer and producer who worked on many blues, jazz and gospel-oriented recordings on the Chess and Stax labels, before becoming hugely famous for producing some of Natalie Cole’s earliest hit recordings. He has since gone onto feature as a character actor (mostly in Andrew Davis films) and as one of the horn men playing behind the Rolling Stones on tour.

But the rest of the out-of-print and incredibly rare vinyl-only Stony Island soundtrack is probably rightfully considered the CTI album that never was. Chicago native Tennyson Stephens is one of the members of The Stony Island Band and actually features on Stony Island’s “Party Lights” and the Benard Ighner classic “Everything Must Change,” made famous the year before in a version recorded by former CTI guitarist George Benson.

Along with George Benson’s guitarist of the time, Phil Upchurch, Tennyson Stephens front-lined the 1975 CTI-distributed Kudu album Upchurch/Tennyson, which yielded a minor radio hit with “You Got Style.” Stephens had replaced Donny Hathaway in Upchurch’s group and the two often recorded on sessions together up through Natalie Cole’s 1977 album Unpredictable (Stephens later relocated to Hawaii and the two never really played together again).

Matthews had recently recorded his magnificent Dune, the last of his own CTI albums, when he launched into this film score. Stony Island features a number of brief Matthews pieces including (the Dune sounding) “Gangster City” (2:17), the brilliant yet ironically titled “Chase the Train” (3:00 – featuring George Young), “Back to Business” (1:24), “High Speed Posters” (1:40), “Ride to Stony Island” (1:21), “Percy Fired” (2:03) and the captivating “Dream Ride” (2:49). It’s not a lot. But what’s here is worth hearing.

Musicians on the David Matthews pieces include Joe Shepley and Alan Rubin on trumpet, George Young on tenor sax, David Sanborn (a soloist on Dune) on alto sax, Dave Tofani on flute, Hiram Bullock or Joe Caro on guitar, Kenny Ascher on piano, Cliff Carter on keyboards, Mark Egan on bass, Jimmy Madison or Andy Newmark on drums, and David Friedman and Dave Samuels on percussion.

While Stony Island is neither a great nor an essential soundtrack, it is a terrific representation of David Matthews’s music and a decent stand-in for a late period CTI recording that should have been.
Posted by Douglas Payne at 1:09 AM

Never heard of this one, but it certainly sounds fascinating. Thx for the heads-up!

Trying to find the Ultimate Dating Site? Join and find your perfect match.

BlueHost is definitely the best hosting provider for any hosting plans you might need.