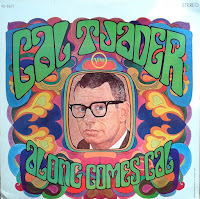 Along Comes Cal: This album is something of a turning point for Cal Tjader. Released in July 1967, Along Comes Cal reflects the pressure jazz artists at the time were under for “crossing over” and appealing to a younger audience – the ones buying the records. Concessions to rock and pop started infecting many jazz records, many of the best and most popular proffered by producer Creed Taylor (who was about to leave Verve for A&M). Here, you have Cal Tjader gamely covering “Trick or Treat,” “Yellow Days,” “Our Day Will Come,” “Along Comes Mary” and the Herb Alpert hit “Green Peppers.” Truth be told, they all come off pretty well – effortlessly transformed by Tjader’s gift for taking just about any melody and making it his own.

The album was initially intended to be a live recording, capturing the Tjader quintet at San Francisco’s El Matador in January 1967. A lack of commercial viability in the live set likely caused the producers to book Tjader a studio date several months later. Only Tjader’s “Los Bandidos” – featuring a nice spot for conguero Armando Peraza – survives the club date, with the remainder of the record beautifully helmed by Cuban arranger Chico O’Farrill (1921-2001). Together, Tjader and O’Farrill make the most of the material, even offering a tongue-in-cheek take on “Round Midnight.” The highlights are, as always, the Tjader originals, “Los Bandidos” and “Samba Do Sueño,” the latter prominently featuring Chick Corea.

A personal favorite here is the Afro-Cuban exotica classic “Similau (See Me Lo).” First waxed by Gene Krupa in 1949, “Similau” – which translates as “I like it” or “I liked it” in the Basque language – was covered by Dezi Arnez, Peggy Lee (whose version was used in a 2017 Samsung Galaxy Note8 ad), lounge lizards Martin Denny and Arthur Lyman and had its most recent airing in Bobby Darin’s 1964 recording. Tjader and O’Farrill fortunately forgo the jungle effects this song too often gets and delivers here an especially haunting and most Tjaderesque bolero. (To date, Along Comes Cal has yet to appear on CD; however, “Los Bandidos,” “Yellow Days” and “Along Comes Mary” were included on the 1993 CD release of El Sonido Nuevo.) 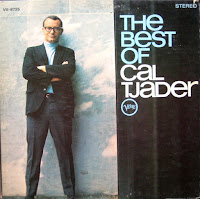 The Best of Cal Tjader:: Even though Cal Tjader had two more Verve albums in him, the label put out this single-disk “best of” collection. Essentially an overview of Tjader’s Creed Taylor productions, this December 1967 release is a fair – if inconsistent – summary of Tjader’s vibrant Verve output. Appearing here are “Soul Sauce,” the set’s sole hit, from Soul Sauce; “China Nights” and “The Fakir” from Several Shades of Jade; “The Whiffenpoof Song” and “Sonny Boy” from Soul Bird: Whiffenpoof; “The Way You Look Tonight” from Warm Wave; “Cuchy Frito Man” from Soul Burst; “Hip Walk” from Soña Libré; “Triste” from In a Latin Bag; and, surprisingly, “Sake and Greens” from Breeze from the East. About half of these songs were released as singles, which makes the appearance of “The Way You Look Tonight” and “Triste” a special treat. No sign here of the other Tjader singles on Verve: “Weeping Bossa Nova” (the single title for “Choro e Batuque”), “People,” “Guajira en Azul” or “Trick or Treat.”

Later Cal Tjader Verve CD compilations would improve on program consistency, even if the titles were awkwardly designed to fit into one of the label’s serial themes. They include Cal Tjader: Compact Jazz (1989), Cal Tjader: Jazz Masters 39 (1994), the funky Cal Tjader: Talkin’ Verve – Roots of Acid Jazz (1996), the semi-ballads set Cal Tjader: Jazz ‘Round Midnight (1996), the notable Ultimate Cal Tjader – Selected by Eddie Palmieri (1999) and my contribution to the Cal-ebration, Soulful Vibes (2008). 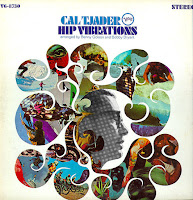 Hip Vibrations: In March 1968, Cash Box called this otherwise “bright, gently swinging, highly imaginative” album – get this – Hip Vibrators. Either someone thought Tjader’s record stimulated their hips or the album was just a cool way to get off. You gotta wonder if Cal Tjader ever saw this review. My sense is that he would have laughed as, umm, hard as I did. Unfortunately, it’s just not that great a record. This wholly under-regarded and overly-arranged album splits its time between notable jazz standards, decent pop covers and the occasional bossa nova. Tjader seemed to consider this Esmond Edwards production as a positive thing. But this sort of record – and not Along Comes Cal - is exactly what the vibist began reeling against: not necessarily the requirement of dealing with pop music (which Tjader was very good at) but the phony way of “souping up” the music to supposedly make it more palatable to a wider range of listeners. Most of the record was arranged by Benny Golson – whose standard “Blues March” opens the record – while West Coaster Bobby Bryant helms a further three tracks (the title tune, “A Waltz for Diane” and “Moanin’”). The Brazilian numbers – Luiz Henrique’s Brubeck-ish bossa “Diane” and “Canto de Ossanha” – were likely included due to pressure from the label (these tunes cross-reference Verve albums at the time by Henrique and Walter Wanderley). The too-arranged “Hip Vibrations,” by Tjader, “Diane” and Bobby Timmons’s “Moanin’” are among the album’s highlights – but only because of the way Tjader handles them. Herbie Hancock appears on a number of tracks, but makes his presence felt only on “Blues March” and “Django.” Jerome Richardson takes several notable solos, especially on “Blues March,” “Diane” and “Windy,” a personal favorite that favors Tjader nicely too. It’s an album that could have been better if Tjader was left to his own devices and not subject to the whims of whomever it was calling the shots to sweeten the thing. (To date, Hip Vibrations has yet to appear on CD.) 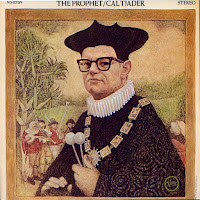 The Prophet: Cal Tjader’s final Verve record was his penultimate Verve recording. The Prophet was waxed in September 1967, three months before the bulk of Hip Vibrations but not released until March 1969, after the vibist put out two albums on his own Skye label. The delay is likely due to the program’s merciful lack of commercial or cross-over fare; on this occasion, Tjader was having none of it. The exceptional quality of the music and the performance on tap here certainly necessitated the album’s eventual release.

Even writer Herb Wong opened his liner remarks by stating simply, “This is an ecstatically beautiful album.” Indeed, it is.

The album is effectively Tjader’s first of only two projects with producer Esmond Edwards, who the musician credits for this album’s success: “Working with Es was great. He understood how I felt about playing and was very receptive to the concept. I did not want any pressure on current tunes, and I did not receive such pressure.” Tjader was additionally fulsome with praise for Donato and Sebesky for contributing to the high quality and enduring enjoyment the record provides.

The especially well-programmed set of cookers and ballads is comprised of Tjader and Donato originals with one nod to Johnny Mandel’s “A Time for Love” (now a jazz standard, from the long-forgotten film An American Dream [1966]).

Donato – whose marvelous “It Didn’t End” Tjader covered in 1966 – delivers three tunes, more jazz than MPB: “Warm Song” (chosen by Wong as the theme to his KJAZ show), “Aquarius,” and the especially cinematic “Temo Teimoso.” Tjader’s originals, however, are the album’s highlights and include the superbly tongue-in-cheek “Souled Out,” “The Prophet” (previously heard on Soul Bird: Whiffenpoof), “Cal’s Bluedo” and “The Loner” (which the Tjader group can be seen and heard playing in another long-forgotten film, For Singles Only [1968]).

Despite professing an aversion to covering pop crap like “Trick or Treat” or “Along Comes Mary,” Tjader departed Verve to make the even-more pop-infused Solar Heat for his own label, Skye Recordings – also with Joāo Donato on board. Whatever anyone else says, everything about Solar Heat is tremendously good. I think the ironically-titled Solar Heat is a fantastic record, and surely among my Tjader favorites. It is a worthy follow-up to The Prophet and one that should be heard as, perhaps, a more pop-oriented companion to The Prophet, one of Tjader’s very best for Verve. (The Prophet was released on Japanese CD in 2015.)

Posted by Douglas Payne at 3:59 PM