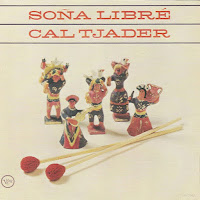 Soña Libré: Released in May 1963, the wonderful Soña Libré is among Cal Tjader’s least known but better recordings of the sixties. “Here,” noted Cash Box magazine, “is a very pleasant amalgam of jazz, bossa nova and diverse Latin rhythms.” Indeed, the program is a smart set that balances its various genres seamlessly. It speaks to Tjader’s expert success with choosing players who can glide as effortlessly as he does along his chosen musical path. One notices instantly Cal in a new context, beautifully buttressed by the silky-smooth organ work of Clare Fischer. Fischer – inspired by Brazilian organist Walter Wanderley – doesn’t blow hot like Jimmy Smith. His is a warm breeze that complements Tjader perfectly. (Fischer returns to the piano for “El Muchacho,” “Azul” “Insight” and “Alonzo.”). Tjader reflects on Henry Mancini (“Sally’s Tomato”) and Debussy (“My Reverie”), two sources that should have appeared more often in Tjader’s repertoire. But the band originals remain the album’s highlights: Tjader’s intoxicating “Hip Walk” and “Azul,” conguero Bill Fitch’s marvelous “Insight” (which later Tjader associate Poncho Sanchez covered himself in 1991) and former Tjader pianist Lonnie Hewitt’s “Alonzo” (later heard on Cal Tjader Plugs In). (Soña Libré was among the earliest jazz CD reissues, having coming out in 1984. While it’s long been out of print, used copies are still easy enough to find.) 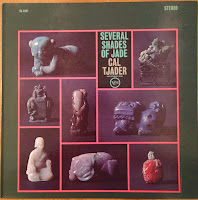 Several Shades of Jade: Cal Tjader goes East – and Eastern. This is the first of Tjader’s New York studio recordings and it’s got Creed Taylor’s fingerprints all over it: star soloist surrounded by a large group of studio musicians in a highly-arranged setting. Why it took this long for Taylor to assert his authority over Tjader is a mystery, but the suits at MGM likely wanted to see Tjader produce more paper jade. Bringing Tjader East to go Eastern was a canny, if not risky move. Taylor’s ace-in-the-hole was Lalo Schifrin, the young Argentinian pianist and composer who brought the world Dizzy Gillespie’s “Gillespiana” several years before.

By 1963, there was nothing new about East-Meets-West jazz. John Coltrane, Horace Silver, Chico Hamilton, Herbie Mann, Ahmed Abdul-Malik and, most notably, Yusef Lateef had all covered this ground. Indeed, Joe Goldberg said in his notes to Lateef’s 1961 album Eastern Sounds that “there is a close relationship between American and Near-Eastern improvisational music.” If Creed Taylor had sought to commodify it, there was no one better suited than Lalo Schifrin to bring it about. He fashioned an elegant program that feels more authentic a fusion than such cliched kitsch as, say, Tjader’s sequel, Breeze from the East (or the Asiatic accents in Carl Douglas’s “Kung Fu Fighting”). Tjader just showed up and made it all sound magical.

Released in August 1963, Several Shades of Jade was called “a radical departure” by Cash Box and “[o]ne of the best disks that [Tjader] has cut in quite a while.” That may or not be, but if it is no one’s idea of a typical Cal Tjader album, it is easily one of Tjader’s finer recordings. Schifrin’s charts are tremendous and Tjader’s spots complement the music beautifully.

The album’s stand-out tracks include “China Nights,” “Sahib” and Horace Silver’s “Tokyo Blues” especially. Schifrin contributes “The Fakir,” “Borneo” (aka “The Ape Woman” by Jimmy Smith), “Song of the Yellow River” and “Almond Tree” – all of which are good, but more soundtrack-y than usual for Cal Tjader (who did several soundtracks of his own). Quincy Jones’s too-little known “Hot Sake,” first heard on his 1961 album Around the World, is another highlight and ends the record on a high-note (Schifrin later retooled the tune as “A Taste of Bamboo” for his 1964 soundtrack for the surfing movie Gone with the Wave).

Perhaps Several Shades of Jade is best appreciated as a Schifrin album with special guest soloist Cal Tjader. While both fare well together, it is Schifrin's fans who are likelier to find this shade of (T)Jade(r) satisfying. Indeed, Schifrin fans can consider Several Shades of Jade a dry-run for the later and widely-admired score to the 1973 film Enter the Dragon, as it too references Eastern modes and Asian scales. (Released with the album below on CD in 1997.) 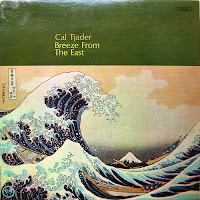 Breeze from the East: Or, as Cal Tjader told Herb Wong in 1964, “[a]s far as I’m concerned, it’s Breeze from the Men’s Room. The project stinks, man.” Tjader claimed the album – hilariously billed as “the new far out Far East sound!” – is what “the powers that be” wanted. But it’s difficult to conceive how a perfectionist like Creed Taylor would willingly put out what writer Paul de Barros justly called a “ridiculous” record. Numbers such as “Cha,” “Shoji,” ”Theme from Burke’s Law,” and “Stardust” are just dumb-headed wanna-be non-starters (oriental jazz? mock rock? novelle novelty?) and all wrong, wrong, wrong for Cal Tjader. If anyone is to blame for this misadventure, it is likely to be composer and arranger Stan Applebaum. Applebaum, best known for arranging hits by the Drifters (“This Magic Moment,” “Save the Last Dance for Me”), Connie Francis (“Where the Boys Are”) and Ben E. King (“Spanish Harlem,” “Stand by Me”), was best at meshing rock-beat touches with easy-listening flourishes; an ill-advised brew for Tjader. As a sequel to Several Shades of Jade, Breeze, originally released in February 1964, is a failure of almost operatic proportions – especially as the two records are heard together on one CD. Simply listen to this album’s take on “China Nights” compared to the vastly superior take on Jade: it’s as day-for-night is to night in film or a child’s drawing is to a masterpiece. Tjader’s originals, “Leyte” (revisited on Tjader’s Soul Sauce), “Black Orchid” (1959) and “Fuji” (a retitling of the earlier “Triste”) and Tjader’s take on “Poinciana” (which goes some way to informing Gary McFarland’s 1965 take on “Bloop Bleep”) are the only respites in this barren musical desert. (Released with the album above on CD in 1997. “Fuji,” “Black Orchid” and “Poinciana” are also included on the 1993 CD release of El Sonido Nuevo.) 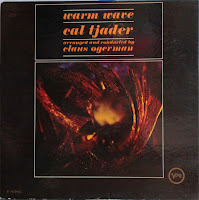 Warm Wave: After the misfire of Breeze from the East, Cal Tjader beautifully presents a ballads set here that finds him much more in his own element. Six years after his previous “with strings” record, Latin for Lovers, the program presented on Warm Wave is (surprisingly) mostly of Tjader’s own choosing. The tunes are some of Tjader’s favorites from the forties, sweetened ever so subtly by Claus Ogerman’s always lush and lovely strings. The one exception being the contemporaneous “People,” which notes writer Herb Wong correctly predicted would become a standard itself. I used to dismiss this record as a boring “easy listening” experience that contains none of the fiery or funky Latin tunes Tjader is famed for. But that ignores how beautifully and exceptionally Tjader handles a ballad. “Violets for Your Furs,” “The Way You Look Tonight” and “Passe” – the album’s jazziest tunes, all notably buoyed by pianist Hank Jones – are especially lovely. But the soft sambas (supported by guitarists Kenny Burrell and Jimmy Raney) – “Where or When” and “This Time the Dream’s on Me” – are equally as enjoyable as well. Ogerman’s “Sunset Blvd.” is surely the album’s high point and one that pianist and later Tjader collaborator Eddie Palmieri claims as being one of his favorite-ever Tjader tracks. The uncredited French vocal group The Double Six of Paris adds Ogerman-drafted vocal touches to “Poor Butterfly,” “Just Friends” and “Sunset Blvd,” laying the ground for Ogerman’s sensuous additions to Stan Getz’s 1967 album Voices. Turns out that Warm Wave, released in September 1964, was one of Tjader’s personal favorites of his own records. He considered it a template for later all-ballads records: “He would say,” notes Wong in Reid’s biography, “’Let’s do another Warm Wave’.” Finally, it should be noted that the album’s cover ranks among Tjader’s nicest presentations on Verve: from the layout and the warm colors (on heavy, glossy stock) to the italicized, lower-case font and Alan Fontaine’s beautifully-lit photograph of what appears to be a wavy sculpture. (To date, Warm Wave has yet to appear on CD.)

Posted by Douglas Payne at 4:50 PM