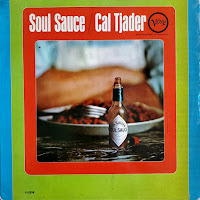 Soul Sauce: This iconic album was Cal Tjader’s single biggest hit and pretty much the best record he ever waxed. This, from a man who put out many fine records in his three-decade career. Soul Sauce was among the first Cal Tjader records I heard back in the mid-eighties; my affection sealed by Armando Peraza’s entrancing and infectious “Maramoor” (as “Maramoor Mambo” on the CD). But the rest of the album is similarly as captivating.

Like Warm Wave before it, there is a sense here of the producer collaborating more with the artist to capture music that has sales potential rather than merely churning out product. And it worked.

The title track is an example of such collaboration. Tjader had been performing Dizzy Gillespie and Chano Pozo’s 1949 song “Guarachi Guro” since the mid-fifties. His first recording of the song was as “Wachi Wara” (1954 – later appearing on the record Tjader Plays Mambo). It quickly became a concert favorite and a Tjader staple. When Tjader came to record a decidedly greasier version of the song a decade later for Verve, it was Creed Taylor who suggested that radio DJs might struggle with pronouncing “Guarachi Guaro.” “How about ‘Soul Sauce’?” – and a hit was born.

Mongo Santamaria’s classic “Afro Blue” was first recorded by Cal Tjader (with the composer in attendance) in 1959 – but not issued until 1962. Santamaria’s version (recorded later in 1959) had already been released, so it’s hard to say which version inspired John Coltrane’s mercurial version in 1964. But it was Coltrane’s version of the song, released earlier in the year on

Tjader’s working group at the time is heard throughout the remainder of the album. Even pianist, Lonnie Hewitt had returned to the fold and is heard to great advantage throughout, notably on “Maramoor,” “Tanya” and Clare Fischer’s “Joāo” (first heard on a 1962 Fischer record with Bud Shank). Hewitt, a terribly underrated composer and musician, also contributes “Pantano” and “Tanya” to the program, while sharing writer credit on the moody “Leyte” (previously heard on the unfortunate Breeze from the East).

As beautifully as Tjader & co. present the standards (“Somewhere in the Night,” “Spring is Here”), they simply don’t stand out in a program this dynamic. But they’re given a loving Latin lilt that make them fit in just as nicely even so.

(Released on CD in 1994 with four formerly unissued tracks including a rough mix of “Soul Sauce” and a hypersonic take on Tjader’s 1955 winner “Mamblues.” Also included are two songs from a session with Gary McFarland, recorded around the same time as the Soul Sauce sessions: “Monkey Beams,” known elsewhere as “Over Easy,” and “Ming,” a blues with Kenny Burrell, Jimmy Heath and Donald Byrd.) 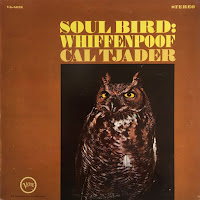 Soul Bird: Whiffenpoof: Released in December 1965, this album takes half its title from renaming yet another Dizzy Gillespie classic, this time “Tin Tin Deo” as “Soul Bird” – also the album’s single. The awkwardly-titled Soul Bird: Whiffenpoof derives the other half of its title from the album’s opener, the strangely anachronistic “The Whiffenpoof Song.” The familiar-sounding song Is a college song long associated with Yale that likely appears at the behest of producer Creed Taylor, who recorded versions of it by the Empire City Six and the Blazers (both 1957) as well as Artie Butler in 1968. Like many movie sequels, this album doesn’t hit as many of the highs as the original slice of Soul. But it does have its moments. The first is surely Lonnie Hewitt’s tremendous “Soul Motion” and others would include the Tjader originals, “The Prophet” and “Daddy Wong Legs” (named for Herb Wong). Hewitt, who was about to leave Tjader’s employ again, is superb on piano – particularly on “Soul Motion” (a better title for the album) and on Sonny Rollins’s “Doxy.” Throughout, there is an obvious, but not quite successful attempt here to merge Tjader’s jazz, Latin and bossa tendencies into a cohesive whole. Sometimes it works – as on “Reza” and “Samba de Orfeu” – and sometimes it doesn’t. Still, this strange bird is worth a listen for those all-too brief moments mentioned above. (Reissued on CD in 2002.) 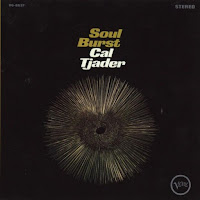 Soul Burst: The third and final album in Cal Tjader’s Soul series is an improvement over the previous set and nearly as successful as the first. Released in May 1966, Soul Burst boasts a strong program, great players – including former Mongo Santamaria accompanist and up-and-coming pianist Chick Corea – and the subtle input of arranger Oliver Nelson on several tracks. Tjader, as always, fires throughout on all cylinders.

Like its predecessors, Soul Burst anchors itself on a Dizzy Gillespie tune; in this case, it’s “Manteca” – which, this time out, does not get a “Soul” title makeover. It’s among the album’s best tracks, with incredible work by conguero (and vocalist) Carlos “Potato” Valdez, making the song over, and notable solos by the flautist, the great Hungarian guitarist Attila Zoller (!), pianist Chick Corea and Tjader himself.

The album’s sole single, the catchy “Cuchy Frito Man,” likely appears here courtesy of Tjader’s Warm Wave arranger, Claus Ogerman. The song, previously performed by Ray Terrace, was published at the time by Ogerman’s music company and Ogerman himself would later cover it on his own terrific 1967 album Latin Rock and, later, arrange the tune for composer Ray Rivera’s 1968 album Latin Workout (the song was also neatly recorded by Billy Larkin and the Delegates).

The album’s highlight for me is Joāo Donato’s “It Didn’t End (Nāo se Acabou),” originally heard on the composer’s tremendous 1965 album The New Sound of Brazil - also conspicuously arranged by the aforementioned Claus Ogerman. (Makes you wonder just how much input Ogerman had on this record.)

Now a jazz standard, “Morning,” by frequent Tjader associate Clare Fischer (who first performed the song on his 1965 album Manteca!), is lovingly delivered by Tjader. Chick Corea’s terrific and far-too little-known “Oran” (originally called “Modbo Mambo”) is absolutely perfect for Tjader and elicits, perhaps, the vibist’s best solo on the record – not to mention one of the pianist’s best features.

Tjader’s originals, “Soul Burst (Guajera)” and “Curaçao,” are, of course, among the album’s many highlights. Again, the standards, in this case two Kurt Weill tunes (“The Bilbao Song” and “My Ship”), get lost in the shuffle. But that doesn’t mean they aren’t worth savoring; particularly given Nelson’s sensitivity and Tjader’s love for a classic melody. Soul Burst is a worthy successor to Soul Sauce; if not better, than certainly as interesting. (Released on CD in 1998.) 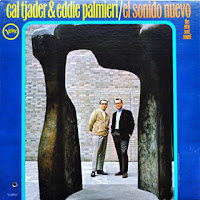 El Sonido Nuevo: The New Soul Sound: With Eddie Palmieri. In 1965, Cal Tjader saw Eddie Palmieri and his band, La Perfecta, perform in New York. After the show, Tjader approached Palmieri about recording with both him and his band, with four trombones and flute replacing the traditional trumpet section. Eight tunes were chosen – “Guajira en Azul,” “El Sonido Neuvo” and “Unidos” are listed as Palmieri-Tjader collaborations – and arrangements were divvied up between Palmieri and Claus Ogerman. Years later, however, Palmieri admitted the pianist and his group recorded the tracks, while Tjader overdubbed his parts later. It’s a mystery why this was done, particularly when the album’s uncredited notes quote Palmieri saying “We just got together and took off.” In truth, the record does capture an inspired collaboration that sounds more seamless than it actually is. Like the Schifrin-Tjader collaboration before it, it is best thought of as an Eddie Palmieri album with special guest soloist Cal Tjader. Their best moments together are on Tito Puente’s descarga “Picadillo” and the intoxicating “head arrangement” of the tune they call “El Sonido Nuevo.” The two movie themes may seem unusual for an album that some consider the birth of “salsa,” but they, too, are highlights – particularly for how cleverly they are jury-rigged to suit the occasion: Ogerman’s mambo-fied “Modesty” (my personal favorite tune here) and Palmieri’s inspired mozambique modification of “On a Clear Day You Can See Forever.” (Released on CD in 1993 with three tracks each from Breeze from the East and Along Comes Cal. CD release of El Sonido Nuevo.) 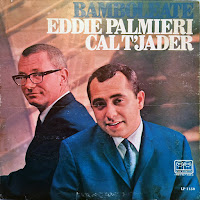 A sequel to El Sonido Neuvo was recorded several months later for Eddie Palmieri’s label at the time, Tico. For a Tjader fan, Bamboleate (later reissued as Palmieri & T’jader) is possibly the better of the two recordings. Highlights are many, suggesting this was more of a true “collaboration” than the previous set. The leaders score their best moments on Palmieri’s terrific “Resemblance,” a Tyner-meets-Brubeck pas de deux on which both leaders shine (Palmieri re-recorded the song in 1975 with Eddie Martinez, Jeremy Steig, Mike Lawrence, Ronnie Cuber, Ron Carter and Steve Gadd) and Tjader’s beguiling “Samba Do Suenho” (covered again on Along Comes Cal). Other high points include Henry Mancini’s “We’ve Loved Before” (from Arabesque), Palmieri and Bobby Rodríguez’s persuasive “Mi Montuno,” Palmieri’s entrancing “Pancho’s Seis por Ocho,” named for producer Pancho Cristal, and the boogaloo “Come an’ Get It” (where, surprisingly, Palmieri seems to disappear altogether). (Reissued on CD in 2002).

Posted by Douglas Payne at 4:29 PM