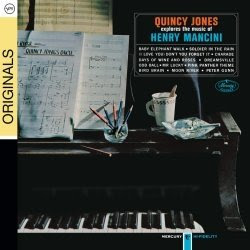 Today, composer, arranger, producer, entrepreneur and svengali Quincy Jones is remembered for just about everything other than the jazz he helmed under his own name in the 1950s and 1960s. One minor exception would be the groovy "Soul Bossa Nova" from Q's album Big Band Bossa Nova (Mercury, 1962), which enjoyed new life some years ago as Austin Powers' theme song.

A rather significant exception, however, is surely Quincy Jones Explores The Music of Henry Mancini (Mercury, 1964), which fortunately achieved its first domestic CD issue in June 2009, some 45 years after its initial appearance on LP (a Japanese CD version was issued in the 1990s that quickly went out of print - used copies used to fetch high dollars on eBay).

This is one of Q's finest albums during what stupid jazz critics dismissed as his "pop phase" (the Mercury years between 1962 and 1965) and a tribute to one of film's greatest and jazziest composers, Henry Mancini (1924-94). The album was recorded over three sessions during February 1964 with some of New York's top session men almost a year to the day before Jones' own maiden voyage into film music with The Pawnbroker.

Here, Q works with some of the catchiest music ever written for the cinema or TV. Much of Mancini's music remains as well known today as John Williams' "Jaws" or "Star Wars" themes, Lalo Schifrin's "Mission: Impossible" or even Jones' own later themes for "Ironside" (used generously in the Kill Bill films) and "The Streetbeater" theme to Sanford and Son.

There is little doubt that Quincy Jones has a great fondness for this music and even more admiration for Henry Mancini. The two were to become great friends while in Hollywood and both greatly respected the other's achievements.

Quincy Jones' musical exploration was one of the earliest album-length tributes to Henry Mancini's music. (Jones also produced Sarah Vaughan Sings The Mancini Songbook the following year, an album comprised of several sessions recorded between October 1963 and December 1964, arranged by Robert Farnon, Frank Foster, Bob James and Bill Holman.) Although Mancini had been in films since the early 1950s, the majority of his best known work came from the period of about 1958, when Peter Gunn first aired, until about the time of this 1964 album - although Mancini's excellent music for A Shot In The Dark was being written and recorded at about the time of Q's tribute, so sadly, none of this music is featured here.

Not content to merely use Mancini's well-defined originals as is, Q puts his own unique spin on the arrangements, showing how well he would maintain his jazz instincts in his own film work later on, without ever casting off or casting out the personality of Mancini's distinct musical charms. It's an amazing transformation. Mancini has never - never - sounded as good as Jones makes him sound here.

Q transcends Mancini's music, often - believe it or not - improving on the originals as this definitive reading of "Charade" (from Hatari!) attests. It's hard to imagine that film without this particular version of the theme.

Q gives "Dreamsville" (from Peter Gunn) an appropriately dreamy context, to which Bobby Scott tinkles the ivories most enchantingly (buttressed, perhaps, by Jerome Richardson's warm, swinging solo). Refusing to drown in the goop given to most covers of "Moon River" (from Breakfast at Tiffany's), Q offers a stunningly swinging arrangement in his near-patented "big band bossa nova" groove, fitted with a good Kirk solo on soprano sax. Listen, too, to the brilliant accents studio-shy Gary Burton brings to "Peter Gunn" on marimba.

The kooky swing of "Bird Brain" (from Soldier in the Rain) boasts all-sorts of kooky sounds from a bass clarinet solo (Wally Kane?), Major Holley's scat vocalizations and long-time Jones associate Toots Thielemans - and it works unbelievably well, cushioned as the soloists are in Q's feather-lined nest.

In Q's hands, "(I Love You) And Don't You Forget It," a hit for Perry Como in 1963 that added Al Stillman's lyrics to Mancini's "Tinpañola" (from the 1961 album Mr. Lucky Goes Latin), is utterly revitalized by a marvelous horn section. Rahsaan Roland Kirk takes a dynamic solo on flute here (he reappears on "Peter Gunn" too).

The saxes - which include the finest sax sounds in New York at the time including Jerome Richardson, Stan Webb, Rahsaan Roland Kirk, Phil Woods, Seldon Powell, Romeo Penque and George Berg - get the bulk of the record's compact, yet meaningfully melodic solos.

But it's Q's horn voicings throughout that are immaculately memorable. No one has ever arranged horns (and strings) as imaginatively as Quincy Jones does. They're economical and always perfectly composed of the right amount of brass or wind, usually brass, but never too much. The horns build up to a suspenseful climax that either the soloist or an alternatively quieter group of instruments somehow resolve.

Anonymous said...
This comment has been removed by a blog administrator.
1:53 AM