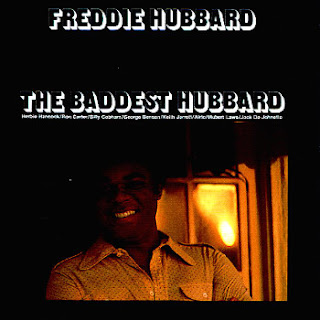 The great reissue label Wounded Bird recently issued eight of Freddie Hubbard's lost albums from the 1970s on CD. It's amazing that a reissue label would even bother to make such a great investment in one jazz artist who wasn't Miles Davis or Duke Ellington. But it's also amazing that the company cared enough to release these eight CDs from the trumpeter's most criminally under-appreciated period of creativity. None of these albums ranked high among critics, nor sold much upon their original release.

Six of the CDs Wounded Bird issued comprise the bulk of Hubbard's 1974-80 output on Columbia Records and have been covered earlier on this blog. Two of the CDs are exact reissues of LP compilations issued by CTI, the label Hubbard recorded for between 1970 and 1973, while the trumpeter was recording for Columbia.

Jazz producer, arranger, historian, journalist, scholar and my very good friend, Arnaldo DeSouteiro, recently covered Wounded Bird's reissue of one of the Hubbard compilations, given the very 70s title, The Baddest Hubbard, on his fantastic Jazz Station blog. Arnaldo's knowledge of CTI is peerless (he has been the single-most important contributor to my CTI discography for many, many years) and he beautifully expresses what can go wrong with too many CD reissues today.

I share Arnaldo's words here - with his permission and my thanks - to remind those who want us to buy their product that reissues, while very deeply appreciated by fans, also deserve more than going back to the original tapes. We who have not gone over to all-digital still like, even need, good packaging. And the musicians who bothered to make the music in the first place deserve proper credit. The rest is by Arnaldo DeSouteiro:

The first CD reissue ever of a compilation released in 1974 by CTI Records, soon after Freddie Hubbard left Creed Taylor's stable to sign a million-dollar contract with CBS. Ironically, Sony now controls all the CTI catalog from the '70s, and licensed this compilation to Wounded Bird.

The CD booklet reproduces the original front & back cover artwork, but not the liner information. It means that Ira Gitler's text was deleted, as well as Fred Valentine's b&w liner photo. Most surprisingly, Don Sebesky, who arranged half of the material ("First Light," "In A Mist"), is not mentioned anywhere on the CD. Rudy Van Gelder (who engineered ALL tracks), Fred Valentine (who also did the front & back cover pics) and Bob Ciano (responsible for the album design) either...

But the names of several musicians who didn't play a single note on any of the tracks (Bob Bushnell, Ed Shaughnessy, Richie "Pablo" Landrum) are!

I don't know from where Wounded Bird collected such crazy info, but certainly it wasn't from Douglas Payne's fabulous CTI website, the most reliable and most comprehensive source about CTI Records on the web.

Despite all these mistakes, the musical content is top class, including the title tracks from the albums "Red Clay" (Hubbard's debut at CTI) and the Grammy-winning "First Light", magnificently arranged by Don Sebesky, who also scored Bix Beiderbecke's intriguing "In A Mist" (from the "Sky Dive" sessions).

"Here's That Rainy Day" completes the program. It's a track from the "Straight Life" LP, on which Hubbard is backed only by Ron Carter and George Benson; however, the other four players (Jack DeJohnette, Herbie Hancock, Richard "Pablo" Landrum, Joe Henderson) are wrongly listed among the sidemen on that tune. Couldn't the Wounded Bird guys give a call to Creed Taylor or Doug Payne to check the info? Or simply take a look in the original LP issue? Jesus!
Posted by Douglas Payne at 11:41 PM

Well said,(criminally under-appreciated) for the life of me I have never figured out why critics dump all over these CTI dates( save for Red Clay which seems to be the only recording from this era that is on the approved list). I was just listening to Straight Life the other day. How can these guys even for a second claim that this recording does not cook, am hearing things that are not there? Same goes for Keep Your Soul Together. Ok some people might have stlye issues with Sebesky's arranging on soemthing like Polar AC ( I like it, but to each his own) but to claim that somehow the playing on these recordings is anemic or uninspired just does not jibe what I hear. As a teen in the 80s I would listen to these recordings that my parents had amassed in the 70s and rave about only to be admonished by older ‘wiser’ listeners and musicians alike. It was not until I was much older that I was secure enough to understand that these people were way off the mark and mmy first impressins of this music were correct: it swings hard.