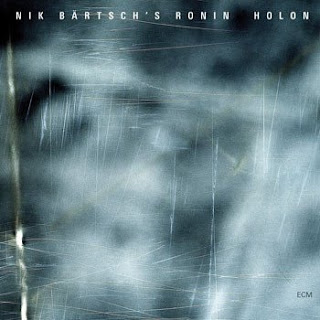 Holon is the second ECM disc of "zen funk" from Nik Bärtsch's Ronin and the eighth in Bärtsch's series of "Ritual Groove Music" sets since 2001 (the first six are available only through the leader's web site). Composer and pianist Bärtsch (b. 1971, Zürich, Switzerland), together with Sha (b. 1983, Bern) on bass clarinet and alto saxophone, Björn Meyer (b. Stockholm) on bass, Kaspar Rast (b. 1972, Zürich) on drums and Andi Pupato (b. 1971, Zürich) on percussion, has forged yet another superb outing, laced with unfettered emotion, uncommon brilliance and uncompromising collaborative artistry.

The instrumentation is slightly altered from the group's previous and equally beautiful Stoa (2006), with the pianist foregoing his otherwise merely decorative Fender Rhodes and reed player Sha ditching his contrabass for alto sax on a very few occasions. But no one will notice the difference.

This July 2007 recording, issued in February 2008, like previous Ronin recordings, consists solely of Bärtsch compositions. The composer again gives his songs such erudite titles as "Modul 42," "Modul 41_17" (the first of the disc's notable moments and 15 minutes of ecstatic engagement), the filmic "Modul 39_8," "Modul 46," which has interesting echoes of Claudio Simonetti, the playful "Modul 45" and the alternately winsome and dramatic "Modul 44."

But the lack of emotion and artistry in the titles is not at all reflected in the passionate delivery of the music. There is something here strongly reminiscent of such abstract expressionist painters as Barnett Newman, who also gave many of his beautiful paintings equally abstract and academic titles. Like a painter, Bärtsch and company are clearly more interested in providing the listener with a palette that he or she can interpret in his or her own way - without any juxtaposition of the artist's intentions of prosaic and self-meaning titles.

By way of a minor digression, I previously made a comment suggesting that Nik Bärtsch's Ronin eschews the seemingly predictable course ECM takes, from its prevailing European austerity to the cash-cow recordings of Keith Jarrett, who I unfairly named (or blamed) in particular, for the great expanse of work ECM issues in many different musical genres. This unnecessary insult to ECM and Keith Jarrett was intended to flatter Bärtsch and what his Ronin accomplishes. But it's just wrong and I apologize whole heartedly for it.

As I delve more deeply into the fascinating sphere of Nik Bärtsch's Ronin, I can connect some dots that I hadn't heard before. Most notably, it's easy to hear how ECM has laid the foundation for Ronin with its many piano-based recordings (from Paul Bley at one end to Tord Gustavsen at the other) and how Jarrett himself is much more fundamental and innovative in the ostinato jazz realm than he's ever been given credit for.

There is something especially European about Nik Bärtsch's music (the group is, after all, European and if they don't sound like it, then I can't think of much American music of late that's this inviting, inventive or involving), which is why Holon as well as the group's previous Stoa have found a particularly good home at ECM.

But it's hardly austere. It consistently hypnotizes (ritual), it swings (groove) and it has a surprisingly strong impact (music). And, like the best of Keith Jarrett's own compositions on ECM since the Trio recordings (particularly "Flying - Part Two" from Changes, "Dancing," "Lifeline" and the rest of Changeless, "The Cure" from The Cure and "The Out-of-Towners" from The Out-of-Towners) - these are patterns, or modules in Bärtsch's world, that work well on many levels; creating a basis of hypnotic music that prompts and provokes exciting intervention.

Start following our signals NOW and make up to 270% daily.