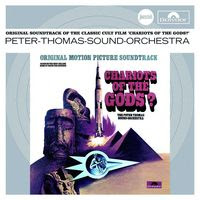 Today, the German arm of Universal Music Group is releasing a CD of the complete version of composer Peter Thomas' magnificent soundtrack score to the 1970 film Chariots of the Gods? - aka Erinnerungen an die Zukunft.

(By way of full disclosure, I was involved in the production of this particular CD and benefit in absolutely no way from the promotion or the sale of the CD.)

Based on the first two books by Erich von Däniken proposing that ancient wonders of the world are the result of alien intervention, the film has had a history almost as strange as Däniken's initial proposition.

Directed by the famed German genre specialist Harald Reinl (1908-86), Chariots of the Gods? opened in Germany in April 1970 and, despite hardly any American attention whatsoever, garnered a nomination for an Academy Award for Best Documentary, losing out to Woodstock - perhaps the more positive reflection of who we were and where we were at the time.

Despite the rabid popularity of Däniken's book, most Americans didn't even know a Chariots of the Gods? film even existed. The rights to the film were eventually purchased by an American producer, who sliced it and diced it down to a 1973 NBC-TV special narrated by Rod Serling called In Search Of Ancient Astronauts. Finally, another American distributor, Sun International Productions, purchased the rights to the film and gave it a proper American premier in 1974, at which time it did quite well playing cheap theaters for a couple weeks at a time. Now derided as a "pseudo documentary," the film maintains a pretty strong cult following to this day.

The soundtrack has also had a weird history. Polydor issued the Erinnerungen an die Zukunft soundtrack in 1970, combining 18 of Peter Thomas' cues into two suites, one on each side of the record.

On side one is the 17:40 suite titled "Erinnerungen an die Zukunft" (which translates as "Memories of the Future," the German title of Däniken's first book, titled Chariots of the Gods? in America) and on side two is the 17:21 suite titled "Zurück zu den Sternen" (which translates as "Return To The Stars," the German title to Däniken's second book, titled Gods From Outer Space in America). This version of the soundtrack was also issued in Germany on a now long-out-of-print CD in 1998.

In 1972, Polydor issued this soundtrack on vinyl in other parts of Europe, using the same cover graphics and suite combinations, though replacing the German title with the better-known English title. Finally, when the film won its 1974 American release, the American Polydor label issued a soundtrack album that actually broke the suites up into their original 18 cues and used the American film poster art for the LP's cover.

This new CD maintains the individuality of the LP's original 18 cues and the American cover art PLUS adds 10 additional cues from the film that have never been released in any form before. As one of the disc's producers, I wanted to be sure to include as much of Maestro Thomas' music as humanly possible (anyone who has seen the film knows that it is filled with music - only about six out of the film's 93 minutes features no music at all). We opted against adding a few pieces of electronic sound effects that really didn't add anything musical to the proceedings and probably only totaled about 2 minutes of time.

The film tends to repeat certain cues quite often, which explains why there isn't an 80-some minute score, and some of the cues on the CD were never even used in the final film.

We also tried programming the disc in such a way that makes sense for the film but, more importantly, works as a great piece of music, with the requisite drama and adventure of something grand, like a symphony.

The end result is nearly a full hour of one of Peter Thomas' most glorious musical works ever. There are many wondrous musical moments here. My favorite is probably "The Bible: Book of Ezekiel." But I would need both hands to count the many highlights present in this genuinely thrilling musical journey.

Another bonus we've included here is Peter Thomas' nearly Blaxploitation-like version of the film's main theme, recorded in New York with American musicians in early 1974. American Polydor had asked Thomas to record an "American version" of the film's theme to release as a single, timed to the film's American opening that year. For whatever reason, though, the single was never issued in America.

The single was, however, issued in Germany and Thomas also included it in Reinl's next filmed voyage into Däniken's theories, Botschaft der Götter/Mysteries of the Gods (1976), and on the Polydor soundtrack of the same name, which was only issued in Germany (the song also appears on an out-of-print CD from 1992 titled Peter Thomas Film Musik).

Chariots of the Gods? should be pretty readily available at most of the online outlets. But it's a sure bet that Dusty Groove in the US and Movie Grooves in the UK will have it if you want to support the better shops that tend to carry this kind of music. I hope you'll enjoy it as much as we did bringing it together.
Posted by Douglas Payne at 1:44 AM

I am SO happy about this! In January, I was finally on the verge of shelling out the cash to buy the OOP import CD when something told me to check around again one more time. Sure enough, I discovered the Movie Grooves site and saw that it was being re-issued with extra tracks and divided up into separate tracks!
I love the soundtrack and film for the overall mood they capture.
Thanks SO much for helping get this back out there on CD with extra tracks!

I just ordered it today from local shop in Stockholm, good price and I'm looking forward to it a lot.

It's one of Peter Thomas most solid works, but I laugh a little bit everything I hear "Lake Titicaca" because he sneaks in he Girl from Ipanema :)

Unknown said...
This comment has been removed by the author.
4:32 PM

The problem with the soundtrack CD is that it is missing a lot of the beautiful music which is in the actual movie. It seems as though Reinl asked for some rearrangements of some of the music and played the music for Sodom and Gammorah while the documentary was talking about the medieval paintings of UFOs in Yugoslavia.

Christopher Baroudi, this is true. The CD re-issues of Chariots Of The Gods and Mysteries Of The Gods both are missing music, even though they both include previously unreleased tracks. This is likely due to the missing music not being composed by Peter Thomas. I know that for the US version of Mysteries Of The Gods, some of the music was taken from production library records by composers named Pierre Arvay and Armando Sciascia. I suspect some of the other music is by Roger Wagner, who's music was also used in "In Search Of Ancient Astronauts" and "The Outer Space Connection". Of course, one day I hope this music by Roger Wagner will be released on CD. I wish I knew who had the original tapes because I would try to contact them about this.