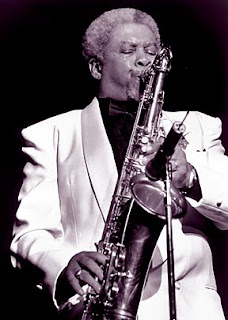 The great composer, band leader, educator, humanitarian and reed player Frank Foster, died today of complications from kidney failure at his home in Chesapeake, Virginia. He was 82. Born in Cincinnati, Ohio, on September 23, 1928, Frank Benjamin Foster took up the clarinet at age 11, switching to alto saxophone two years later. He became so proficient on the alto sax that he was playing professionally at age 14 and leading his own 12-piece band while still a senior in high school.

After attending Wilberforce University, Foster moved to Detroit with trumpeter Snooky Young where he joined the local scene, playing with such musicians as Wardell Gray. After being drafted and serving in Korea, Foster returned to the music scene by joining the big band of Count Basie (1904-84), where he stayed through 1964.

During this time Foster was a featured soloist in the Basie band on tenor saxophone and contributed many compositions and arrangements to the Basie book, including the now standard “Shiny Stockings” as well as “Down for the Count,” “Blues Backstage,” “Back to the Apple” (featured in the 1986 Woody Allen film Hannah and Her Sisters), “Discommotion,” and the terrific “Blues in Hoss’ Flat” (from the 1959 album Chairman of the Board and brilliantly used by Jerry Lewis in his 1961 film The Errand Boy), as well as arrangements for the entire 1961 album Easin’ It (featuring “Discommotion” and available on the now out-of-print CD box set The Complete Roulette Studio Recordings of Count Basie and his Orchestra).

While still with Count Basie, Frank Foster recorded several solo albums for the Blue Note, Savoy and Argo labels, but began his own solo career in the mid ‘60s with several albums of soul jazz on the Prestige label, including his first, Fearless Frank Foster (1966), featuring another near standard in “Raunchy Rita.” It was around this time that Foster also arranged Sarah Vaughan’s Viva Vaughan (Mercury, 1965), performed with his own 18-piece ensemble and toured and performed with Woody Herman, Lionel Hampton and Duke Pearson.

Foster recorded several albums for the Blue Note label (one of which was never released) and joined drummer Elvin Jones’s group in 1968. Foster recorded and toured with Jones through 1974, while holding several teaching positions and a featured spot in the Thad Jones-Mel Lewis Big Band from 1972 to 1975.

In 1974, Foster formed his famed Loud Minority band (first heard on the 1974 Mainstream LP The Loud Minority) as well as Living Color, a quartet co-fronted with drummer Charli Persip. In 1983, Foster co-led a quintet with Frank Wess, recording Two For The Blues (Pablo, 1984) and Frankly Speaking (Concord, 1985).

In June 1986, Foster succeeded Thad Jones as leader of the Count Basie Orchestra. While leading the Basie Orchestra, Foster earned two Grammy Awards, one for his arrangement of the Diane Schuur composition "Deedles’ Blues" (1987) and the other for his arrangement of the renowned guitarist/vocalist George Benson’s composition "Basie’s Bag" (1988 – Foster had earlier played with Benson on the guitarist’s 1973 CTI album Body Talk).

Foster left the Count Basie Orchestra in 1995 to assume leadership of his own groups The Non-Electric Company (a jazz quartet/quintet), Swing Plus (a 12-piece band), and The Loud Minority Big Band (an 18-piece concert jazz orchestra).

In 2001, Frank Foster suffered a stroke that impaired his left side, preventing him from playing the saxophone. He turned the reins of his Loud Minority over to trumpeter and group member Cecil Bridgewater, and continued composing and arranging at his home in Chesapeake, Virginia. He had recently contributed to Jamie Cullum’s The Pursuit.

The zest of wondrous musicality in Frank Foster’s sax playing and the zing of spontaneous joy in his writing will be sorely missed in jazz. Very few sounds could match the utter joie de vivre of Frank Foster’s music.

Few players and even fewer composers can match or even copy the lovely examples of music Frank Foster left for us. Fortunately, there is much of Foster documented on disc and plenty of other worthy talents who appreciated what Frank Foster contributed to music in his six-decade career.

Foster’s glorious “Blues in Hoss’ Flat” – as interpreted by Jerry Lewis in The Errand Boy (search YouTube for the brilliant copycat version made but not used for Family Guy):

The immortal “Shiny Stockings” by Count Basie and his Orchestra:

“Raunchy Rita” from the great 1968 Elvin Jones/Richard Davis album Heavy Sounds, with Foster reeling out on tenor sax and the little-known and possibly pseudonymous Billy Greene on piano:
Posted by Douglas Payne at 10:53 PM

It was sad when Foster suffered a stroke. It's tough to see such musical giants impaired by disability.dj ny

your blog is amazing...

Hi Doug
I hope the long gap between posts means you're busy with other stuff and does not mean you've given up on Sound Insights. This is such a great blog!

I'd like to echo the sentiments of Jean K.

I trust that Doug is well, and perhaps tackling some project away from the Blog.

Hopefully you'll be returning to the blog soon, Doug!

where have you been so long?
i must have checked it a hundred times and no new posts... bummer.

Doug We miss your blog, come back
Marilyn

Merry Christmas Dear Doug
where ever you are, take,care
Marilyn

Marlboro Newport Cigarettes is one of the cigarette brand which grew significantly and in 1975 it overtook Winston to become the NO.1 brand in the U.S. and by 1982 Marlboro Lights had established itself as the NO.1 selling low tar cigarette. Marlboro Lights is a classic version of Marlboro, despite being a light Cheap Newport Cigarettes, it has a nice smoke density, a fair nicotine hit and very sweet taste.

Its POLO Shirts For Men textile fiber thin is long, is in the wool sheep the highest quality variety. Other like New Zealand, South America, the various European countries Polo for women polo, the Southern Alps arteries and so on have raising, and enjoys the high reputation in the world. The snow blue wool is also POLO L-Sleeved Shirt For Men the common variety. Snow blue Mao Yuan said that the snow especially blue wool POLO T-Shirts For Men, because of produces acquires fame in the British Scotland's snow especially blue archipelago.
Because the snow blue wool and mixes with many shags take the down as the main body and in an opposite direction the wool polo shirt, this kind natural thick thin promiscuous, has formed snow blue woolen fabric unique plentiful and the fluffiness POLO Sweaters For Men, soft, but is not exquisite, the gloss and the elastic good characteristic jeu76ch, have the rough style long sleeve for women.

At first glance I fell in love.The strappy design and minimal appearance of Abercrombie Fitch are classy.Franklin and Marshall T-shirtsBut that sculptured heel, with its understated approachVibram Five Fingers Shoesand what looks like a little animal paw, I was unsure how I felt.Louis Vuitton HandbagsThen I discovered there are similar versions with other types of Dolce & Gabbana, possibly a zoo of choices

Thanks for sharing this kind of information.

Thanks for sharing
Nice blog

well i rarely leaves comment on any site but your blog is really so amazing that i can't stop myself from making comment on it...

Great musician. He is one of my favorite.

I don't even know how I ended up here, but I thought this post was great. I do not know who you are but certainly you are going to a famous blogger if you are not already ;) Cheers!. Also visit my web blog cestitkaza.com

Interesting piece of information here on your website. Keep up the good work and continue providing us more quality information from time to time.

Unknown said...
This comment has been removed by the author.
12:47 PM

You’ve got some interesting points in this article. I would have never considered any of these if I didn’t come across this. Thanks!
aanrechtblad terrazzo

This is very nice one and gives indepth information. thanks for this nice article.
dekton keukenblad

Well, I appreciate your efforts in creating this post however I believe you should take the time and elaborate :) Great blog indeed.
dekton keukenwerkblad

I have been browsing online more than 3 hours today,
yet I never found any interesting article like yours.
It's pretty worth enough for me. In my opinion, if all webmasters and bloggers made good content as you did, the internet will be a lot more useful than ever before.

Great information in this article. Thanks for sharing.

The Most Recent Music in Nigeria said...

In this fashion my friend Wesley Virgin's story launches in this shocking and controversial VIDEO.

Wesley was in the military-and soon after leaving-he unveiled hidden, "mind control" secrets that the CIA and others used to get anything they want.

These are the EXACT same SECRETS many celebrities (notably those who "became famous out of nothing") and the greatest business people used to become rich and famous.

You've heard that you use less than 10% of your brain.

Really, that's because the majority of your BRAINPOWER is UNCONSCIOUS.

Perhaps that conversation has even taken place IN YOUR very own mind... as it did in my good friend Wesley Virgin's mind 7 years ago, while riding an unregistered, trash bucket of a car with a suspended license and in his bank account.

"I'm absolutely frustrated with going through life check to check! When will I finally make it?"

You took part in those thoughts, right?

Your own success story is going to be written. You just need to take a leap of faith in YOURSELF.

Learn How To Become A MILLIONAIRE Fast

Wow is good to be back with my ex again, thank you Dr Ekpen for the help, I just want to let you know that is reading this post in case you are having issues with your lover and is leading to divorce and you don’t want the divorce, Dr Ekpen is the answer to your problem. Or you are already divorce and you still want him/her contact Dr Ekpen the spell caster now on (ekpentemple@gmail.com) and you will be clad you did

Very nice post and blog, Nice article and blog, I found it very explanatory and informative, thank you very much for sharing your knowledge and wisdom with us, we know how important is experience in our lives.

It's inspiring to see how many musician are sending their best wishes to this legend. He will be truly miss.

Thanks for nice information, please visit our web :
Adityo
Adityo