Bill Evans His Piano and Orchestra Play Theme From The V.I.P.s and Other Great Songs 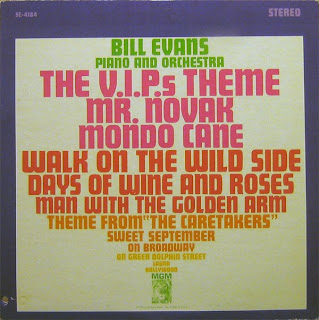 Like many controversial films or books that take some effort or expense to understand properly, some records are better known by their reputation than by their actual merit. This particularly unwieldy album, bearing a significantly unwieldy title, certainly ranks among these.

As a pianist, Bill Evans (1929-80) was seldom captured in orchestral situations. When he was, the records were – and unfortunately now more than before still are - unfavorably compared to his prodigious trio outings and occasional solo recordings.

This 1963 album, variously known (on the back cover) as Bill Evans His Piano and Orchestra Play Theme From The V.I.P.s and Other Great Songs and (on the record label) as The V.I.P. Theme [sic], was named, perhaps, for the most recent of the big-budget films this film-themed collection name checks as front cover artwork.

No doubt the pianist’s most devoted admirers regard this music as “sell out” pop fare, far beneath the dignity of such a great player as Bill Evans. But all that’s nothing but poppycock.

Everybody in jazz, particularly those at MGM (and the MGM-owned Verve Records) in the 1960s, covered themes from popular culture like these. In the days before The Beatles, many jazz players were looking for new hits to make their name with after the dearth of tunes everybody covered from Tin Pan Alley or any number of well-known and unknown stage musicals. Most turned to TV and the cinema.

Even Evans covered many film themes during his career, including such otherwise celebrated performances of “Spartacus,” “The Shadow of Your Smile,” “Emily” (from The Americanization of Emily), “What Are You Doing the Rest of Your Life” (from The Happy Ending) and “Theme From M.A.S.H.” and tunes from the pop-rock galaxy including Dionne Warwick’s “A House Is Not A Home” and Paul Simon’s “I Do It For Your Love.”

So, yes, while Bill Evans could easily wax yet another cover of “Nardis” or any be-bop staple he could play in his sleep, he could also be challenged to rise to the occasion of a new tune from the popular canon and make it worthwhile. 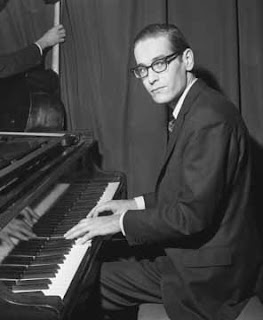 Recorded during two sessions in May and September 1963, one of the least documented years in all of Bill Evans’ recording career, between the well-known overdubbed solo album Conversations with Myself (Verve) and the historic Trio ‘64 (Verve), The V.I.P.s Theme is actually quite a pleasurable respite and catches the moody, often introspective pianist actually having a little bit of fun for a change.

The pianist fronts an unnamed orchestra arranged and conducted by a surprisingly uncredited Claus Ogerman (still going as Klaus Ogerman in those days). Even Ogerman dismisses this record – as he does much of his lively and wonderful pop work from the 1960s, including three rather entertaining records of his own on RCA –admitting in the November/December 2010 issue of Wax Poetics that “I regret that album.”

He continues “it wasn’t very good for Bill Evans’s reputation. He was in big trouble financially at the time, and his manager Helen Keane and Creed [Taylor, The V.I.P.s Theme producer] wanted to do something very commercial that radio stations that normally wouldn’t go near a jazz record would play. And this is why it sounded like easy listening. I never liked the album, but I was glad to make a little money from it. It’s not our masterpiece.”

When the album was first issued on CD in 2008, 45 years after the LP’s initial release, Ogerman insisted that producer and Universal Music head honcho Tommy LiPuma, long an Ogerman supporter (going back to their days together with the huge success of George Benson’s 1976 Breezin’), keep Ogerman’s name off the CD. Indeed, Ogerman’s name appears nowhere on the CD except as co-writer, with Bill Evans, on the “Thunderball” like original “Hollywood.”

From the first session in May, it appeared the intent here was just to get out a couple of 45s and garner some radio airplay for the pianist. The first of these was the Dimitri Tiomkin theme to the 1963 Nicholas Ray epic “55 Days at Peking” (issued on Verve 10293). This song, unlike its flip-side tune “On Broadway,” was not featured on the Bill Evans album (or the corresponding CD) but rather on a 1963 compilation LP called Twilight of Honor (MGM SE-4185). 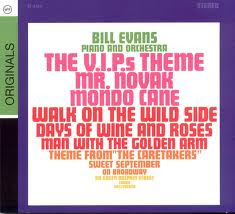 When the Elizabeth Taylor-Richard Burton film The V.I.P.s became popular in the summer of 1963, Verve also attempted to push the 45’s b-side into popularity. The attention this 45 got probably prompted producer Creed Taylor to reunite Evans and Ogerman in the studio in September 1963 to record enough tracks to fill an album. The album, oddly issued on the MGM label , was issued in time for Christmas 1963, but never got the attention or the respect it probably deserved had it been given the serious, artistic touch Verve lent to many recording artists instead of the obvious “cash-in” touch MGM gave to this and many other albums of the day.

The album’s shining moments come on not one but three of Elmer Bernstein’s best and brightest themes: “The Caretakers Theme” (1963, which Ogerman had scored earlier in the month for a Creed Taylor-produced session for Ellingtonian alto saxist Johnny Hodges), “Walk on the Wild Side” (1962, which producer Creed Taylor had fashioned into a huge hit by organ great Jimmy Smith in an arrangement by Oliver Nelson) and “The Man With The Golden Arm” (1955, curiously the first jazz take of the tune by any MGM or Verve artist).

Additional highlights include “Laura” (David Raksin’s great theme to the 1944 film, which Evans recorded again in 1966 on A Simple Matter of Conviction), “On Green Dolphin Street” (from the 1947 film Green Dolphin Street, which Evans performed with Miles Davis in the 1950s and in many other performances in concert and on record throughout the remainder of his career) and the Evans/Ogerman original “Hollywood” (which strikingly prefigures the “Thunderball” theme”).

What make these performances work so well is a great amount of incisive, interpretive (and, frankly, expected and appreciated) playing from Evans, beautifully sweetened by Ogerman in just the right measure and tempered with a tremendous amount of swing from all concerned. Each of these makes the album worth the investment for anybody who even remotely appreciates the artistry of either Bill Evans or Claus Ogerman.

Oddly, the May recordings (the 45 features) are probably the weakest of the bunch, with Evans and Ogerman conspiring to achieve some sort of Ferrante & Teicher easy listening pabulum that justifies Ogerman’s acute disregard of this music. Block chords, heavy-handed strings and vocal choirs send things over the edge. But “Sweet September” really does justify the inspiration it prompted.

It’s worth noting that producer Creed Taylor had also overseen recordings of Lyn Murray’s TV theme “Theme From Mr. Novak” and a hit version of Riz Ortolani’s Mondo Cane theme “More” on two of trombonist Kai Winding’s Verve albums, the latter of which was presented in another arrangement by Claus Ogerman.

But to disregard The V.I.P.s Theme unfortunately negates the origins of this inspired musical relationship and disallows the great and dedicated musicianship of those involved. This album also serves to remind us listeners that while sometimes music in search of artistry can be profitable, music in search of profitability can also still be artistic and worthwhile.
Posted by Douglas Payne at 10:43 PM

Bill Evans: "55 Days At Peking". I have this
1963 label demonstration vinyl 7" single release, also featuring "On Broadway" (Verve VS-511. Orchestra arranged & conducted by Klaus Ogerman
and produced by Creed Taylor. The song is not on the album "Bill Evans Plays The Theme From The V.I.P.'s And Other Great Songs".
This album is a straight album of square movie music, with a completely unrecognizable Bill Evans. Evans sounded bored and wasn't improvising
in his distinctive style, while most of the songs themselves were pretty forgettable. This commercial recording is not an album with the quality
of "With Symphony Orchestra" or "Symbiosis", but musically a disappointing fiasco. This music was recorded Bill had already gained a huge well
deserved reputation. Why he took on this project is totally incomprehensible.
See videoclip: http://www.youtube.com/watch?v=r4FzeW9V--4

I disagree. I don't think this album is the "disappointing fiasco" you think it is. You're certainly entitled to your opinion. But as I've noted, I think Bill Evans and Claus Ogerman showed respectable artistry a number of times here. It's not "Kind of Blue" or "Blues and the Abstract Truth" - but it doesn't make it less enjoyable because it wasn't as historic.

Why Creed Taylor never released "Bill Evans At Town Hall Vol.2" with a big band under the direction of Al Cohn. It was because of heavy criticism. But why did he released yet the VIP album, financial considerations of Verve or Bill Evans?

Listen to much better Evans albums with orchestra like the albums "The Gary McFarland Orchestra - Special Guest Soloist: Bill Evans" or "Jazz in the Space Age" by George Russell with duelling pianos between Bill Evans and Paul Bley like a real piano battle.

Start following our trades right now and earn up to 270% daily.