50 years with jazzclarinet: The Best of Lajos Dudas 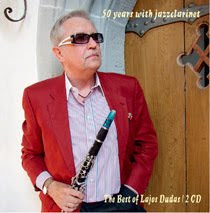 The clarinet is one of the most important instruments in the foundation of jazz, from its early progenitors Sidney Bechet, Barney Bigard, Johnny Dodds, Edmond Hall and George Lewis to such later famed instrumentalists as Ted Lewis, Don Murray, Pee Wee Russell, Peanuts Hucko, Artie Shaw and, of course, Benny Goodman.

But you’d never know it today. Sure, a few folks like Buddy DeFranco, Tony Scott and Jimmy Giuffre helped keep the clarinet spirit alive in the fifties (mostly by going into other forms of jazz). But by the 1960s, hardly anyone would be caught dead playing the clarinet – considered probably the most old-fashioned and out-dated instrument in jazz (sorry, bass clarinet players, led by Eric Dolphy, and sax players like Phil Woods, or countless others, who played clarinet on a less than part-time basis really don’t count).

It was only in Europe where the clarinet seemed to thrive after 1960. Even American clarinetists such as Scott and Perry Robinson were forced to ply their trade in Europe. This was the age that gave rise to Germans Rolf Kühn and Theo Jörgensmann, the Swedish Putte Wickman, the Japanese Eiji Kitamura and far too few others. Then, of course, later there was John Carter, Alvin Batiste, George Lewis, Eddie Daniels and Don Byron. There was also Hungarian émigré Lajos Dudás (b. 1941), who, from the mid-1960s on, has centered himself in Germany.

He’s played prolifically there ever since, particularly on many radio broadcasts with Germany’s best orchestras and Europe’s finest jazz players. He’s also been recorded frequently and quite well since the mid-1970s on a variety of German and Hungarian labels, in some startlingly differing contexts (most notably in a duo format), with some tremendously supportive players and many long-time musical associates.

Lajos Dudas beautifully conjures the entire history of jazz clarinet, from its very beginnings – which extend well before the start of jazz –and its swing and bop modes to its freest and most romantic of now accepted clarinet-jazz moods. He may well even cover this entire trajectory within just one song. It’s part of his nature. He’s almost completely unencumbered by fad or fashion.

50 years with jazzclarinet: The Best of Lajos Dudas captures a fraction of Lajos Dudas’ prolific output. It is the latest of the clarinetist’s samplers. But the point is that this truly under-appreciated clarinetist has a long recording history that hasn’t earned the respect his major-label contemporaries have been given. But the quality of the music he’s performed over the years speaks for itself – that is when it is heard. For the record, I’m surprised that ECM, or some other internationally-distributed label – has never waxed a Dudas album. 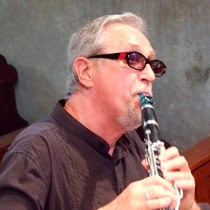 This well-programmed set, however, doesn’t quite live up to its rather unwieldy name. The span of consideration is more like 30 years rather than 50, the music isn’t all jazz and Dudas is not heard exclusively on clarinet (he started off as a sax player). It is, however, a terrific representation of Lajos Dudas’ best musical performances and provides not only some music that is otherwise unavailable on CD, it surprises with some never-before issued gems that account for a mere sliver of what must be hundreds of hours of recorded radio performances the clarinetist has made over the last half century since living in Germany (which is probably where the reference to 50 years comes from).

Dudas aligns himself here with noble European jazz lights like fellow Hungarian ex-pats Attila Zoller (1927-98, on “Rumpelstilzchen”) and Tommy Vig (b. 1938, on “Benny”), Hungarian singer and actress Marta Szirmay (b. 1939, aka Marta Szirmai, on “Wiegenlied”), German trombonist Albert Mangelsdorff (1928-2005, on “Blueduet”), German vibist and free-jazz icon Karl Berger (b. 1935, on “Pirouette” and “Let’s Call The Whole Thing Off”) and American ex-pat vibist Tom van der Geld (from the cult group Children at Play, on “Detour”), not to mention many group regulars including drummer and fellow Hungarian ex-pat János Szudy, German bassist Ali Haurand and, most especially, the great German guitarist (and the manager of this CD’s label, JazzSick) Philipp van Endert, who figures on ten of this double CD’s 25 tracks.

As a set, the presentation of the disc’s first volume is a little erratic. It fluctuates from free-ish outbursts to slow, melodic moments and wildly varying instrumentation. But things start kicking into gear on the set’s second disc, led by the inventively brilliant electronic take on “Summertime” (1991), which follows rather perfectly on the heels of the terrific, yet seemingly out-of-place fusion performance of “Csardes Obstine” (1978).

There is great variety in the presentations Lajos Dudas provides here – maybe a bit too much. But the element of jazz, or more accurately a great sense of swing, pervades throughout. And, somehow, the added presence of Philipp van Endert inspires Dudas to even greater heights and, ultimately, makes for some really exciting music.

Like so many compilations, it’s not exactly the sort of thing somebody else would have put together. There’s no sign of Dudas’s great tribute to guitarist Gabor Szabo, whose sudden death in 1982 prevented a recording he was scheduled to do with Dudas, called “For Gabor” (recorded twice, in 1985 on Sunshine State and then again in 1995 on Encore) or anything from the appropriately named Some Great Songs (Double Moon, 1998) or the utterly lovely Jazz and the City (Konnex, 2004 – whose title is probably a take-off of the TV show Sex and the City).

But far too few people know about Lajos Dudas, who turns 70 in February, and the great wealth of music he has contributed to the jazz pantheon. 50 years with jazzclarinet: The Best of Lajos Dudas is an excellent introduction.

To find out more about Lajos Dudas or to purchase 50 years with jazzclarinet, visit JazzSick Records. To discover just how much great music is here, where it comes from, who plays on what and – needless to say – just how beautifully Dudas shines throughout, here is the discographical detail: