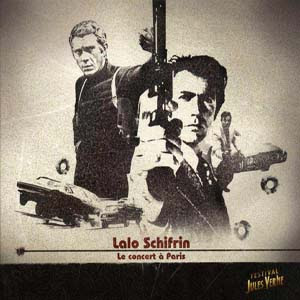 Composer, conductor and pianist Lalo Schifrin presented a concert of film music for the Festival du Film Jules Verne Aventures (aka Festival Jules Verne) on April 23, 2007, at Le Grand Rex theatre in Paris, France – the city’s biggest movie theater – that was caught superbly by Festival leaders for this 73 and a half minute CD presentation.

It’s a pristine recording of an above average performance that captures Schifrin in a rare “Jazz Goes to Hollywood” concert mood. It also evinces several rarely heard nuggets that the composer’s fans will want to hear.

While Le Concert à Paris bears many signs of illegitimacy (no label, no catalog number, limited pressing, no press), it sounds official, it looks official (the nice digipak sleeve bears the concert poster’s artwork) and it bears an introductory note by the Festival’s co-founders, Jean-Christophe Jeauffre and Frédéric Diedonné.

Schifrin’s program expectedly covers his own well-known film and TV themes (“Mannix,” “Bullitt,” “The Fox,” “The Cincinnati Kid” and, of course, two versions of “Mission: Impossible”) as well as the equally well-known Monty Norman James Bond theme (which, oddly, suggests what might have happened had Neal Hefti scored Goldfinger). While Schifrin’s piano factors heavily on many of these pieces, the arrangements of “The Fox” and “The Cincinnati Kid” heard here, and the soloing Schifrin provides, are surprisingly fresh and wonderfully inventive.

Schifrin premieres a suite for his “Enter the Dragon” score here (something he had done earlier for Cool Hand Luke) as well as a suite I’ve never heard before for the “Dirty Harry” themes, prominently featuring the electric bass work of none other than Clint “Dirty Harry” Eastwood’s son, Kyle.

Several extremely nice surprises appear as well in the form of “Concorde: Airport 79,” aka “Theme From ‘The Concorde – Airport ‘79’” (only issued on a long-forgotten 45 in 1979 and hardly ever performed by Schifrin in concert); “Rollercoaster Park Theme,” a lovely waltz, better known as the secondary “Magic Carousel” theme from the 1977 film Rollercoaster; “Cotton Club (Echoes of Duke Ellington),” reprised for the first time since Schifrin’s first Jazz Meets The Symphony studio recording in 1993; and a great version of the famous secondary Mission: Impossible theme, “The Plot,” recalling the version heard on the 1968 album issued on Dot Records.

Due to the limitations of CD space, the concert’s performances of “The Four Musketeers” and “The Cat (Les Félins)” were omitted from this presentation. That’s a shame, as both pieces rank highly among the composer’s film work. But one can hardly dispute the high quality of great music present on Le Concert à Paris. It’s a terrific performance that reveals the too-little known caliber of music Lalo Schifrin delivers on the concert stage.
Posted by Douglas Payne at 12:03 AM

You refered to Kyle Eastwood I've
seen him about 6 times at the Monterey Jazz Festival, he is quite
the professional lives in France has 4 kids and all so composes.
I think we are going to see a lot more of this artist in the future. Thanks Doug for the great write up you never dissapoint me.