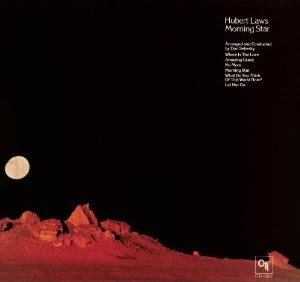 Morning Star is a lovely and too-little known orchestral jazz classic that got lost in the shuffle of flautist Hubert Laws’ prodigious CTI output. Recorded between September and November 1972 and issued early in 1973 between Laws’s well-known The Rite of Spring (CTI, 1971) and the lesser-known performance feature Carnegie Hall (CTI, 1973), Morning Star is among the flautist’s most assured albums.

Now, as part of the CTI Records 40th Anniversary celebration, Morning Star is receiving its first-ever CD release, returning this tremendous music into circulation for the first time in nearly four decades.

There is a perfectly sublime amalgamation of sound present here, as Laws is beautifully partnered on various flutes with Bob James on electric piano, Ron Carter on acoustic bass and Billy Cobham on drums. Laws and company are then set against some of Don Sebesky’s loveliest orchestral flourishes, as ever as complimentary and as much a part of the conception of the performance as any of the soloists.

Unlike almost every Hubert Laws record that came before it, Morning Star, which was nominated for a Grammy Award in 1973 (as was Freddie Hubbard’s Don Sebesky-arranged CTI recording of “In A Mist”), also ranks among the leader’s most consistent and consistently engaging programs. As before, Laws explores a mix of jazz, the classics, pop, funk and spirituals. But here the fusion works so considerably that each track doesn’t feel like a jump in genre.

Laws traverses jazz and the classics with the title track, written by the flautist’s piano partner in the Mongo Santamaria band, Rodgers Grant (a song Laws would record again on his 1994 album Storm Then The Calm), and his own “What Do You Think of This World Now,” featuring sister Debra on vocals. The latter features such a prominent and unusual orchestration from Don Sebesky (similar to what he did in his “Bird And Bela in B Flat” several years later) that a co-composer credit would seem much in order here.

We’re on more familiar ground with the very solemn and meaningful reading of the traditional “Amazing Grace,” which was significant enough to factor on two CTI LP compilations back in the day, Fire Into Music and The Power, The Glory and The Music (Laws himself would re-record this arrangement for his 1985 album Hubert Laws/Quincy Jones/Chick Corea - Blanchard: New Earth Sonata), and Ralph MacDonald and William Salter’s “Where Is The Love,” the huge 1972 hit from the Roberta Flack & Donny Hathaway album, which features many players, including Laws, present on this album. The Roberta Flack & Donny Hathaway also includes the song “Come Ye Disconsolate” that Laws would cover on his 1975 album In The Beginning.

Laws also revisits two of his earlier compositions, “Let Her Go,” originally heard on his second album, Flute By-Laws (Atlantic, 1966), and the chilled-out funk of “No More,” originally voiced by Melba Moore on the 1968 Atlantic album Laws Cause, which also featured Ron Carter’s distinctive bass. A vocal choir consisting of Lani Groves, Tasha Thomas and sisters Eloise Laws and Debra Laws provides the unobtrusive vocals to “No More” here.

This leads to the remarkably exquisite sound that engineer Rudy Van Gelder captured on Morning Song. By the time of this recording, Van Gelder had mastered an utterly unique sound for CTI that was very different to the truly unique Blue Note, Prestige and Verve sounds the legendary engineer had crafted in years past.

The sonority and balance are so gorgeously perfect here that it’s hard to imagine what a lesser engineer might have done with this quartet, two percussionists, seven horn players, 13 string players and (on two cuts) three vocalists. It might even be fair to say that Morning Star is the best sounding album CTI ever made.

Needless to say, Hubert Laws is inspired to play at the very peak of his abilities throughout Morning Song and there’s little doubt that any track off this record could be recognized very much as his own in any blindfold test. In addition to some of Bob James’s loosest and loveliest accompaniment and soloing throughout, the lyrical and like-minded Ron Carter is an asset to Laws’ singular performance, guiding with a subtlety that almost feels as if it is the bassist leading the charge.

Morning Star not only represents flautist Hubert Laws at the top of his game but also references the absolute perfection of that CTI sound. Producer and label owner Creed Taylor had mastered something that came to stand for the pinnacle of jazz in the early 1970s – excellent soloists backed by superb support (many distinctive leaders in their own right) covering a wide swath of meaningful material seasoned to perfection with enough sweetness to make it accessible to more people all captured with the astuteness that was unmatched anywhere else at the time.

Sample the beautiful "Let Her Go" here:
Posted by Douglas Payne at 1:12 PM

Thx for the mention, Doug. Great writing, as always!

A stunningly beautiful album from start to finish, and it contains one of my favorite arrangements of "Amazing Grace." The remaster is a sonic wonder, AFAIC!

I did not know this album before and I'm still shocked. This is one of my favorite album. The sound is unheard of.