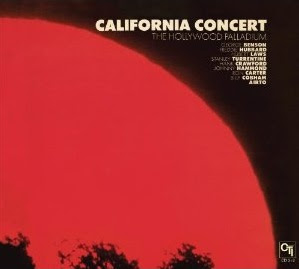 Masterworks Jazz continues its celebration of the 40th Anniversary of CTI Records with the most complete version of the legendary California Concert: The Hollywood Palladium ever heard, newly re-mastered from the original eight-track masters. The new two-CD set doubles the content of the original five-song, two-LP release with five additional tracks – three of them never-before released – and restores the original concert sequence for the very first time ever. It also represents the best sound these performances have ever had. (As an aside, astute viewers will note that Sony restored the LP's beautiful cover art with the original typography, but the restored CTI logo has been moved for some strange reason outside of the sun.)

After CTI Records became independent in 1970, founder Creed Taylor celebrated the label’s early success by collecting a group of musicians actively recording for the label at the time for summer tours. These tours were package deals highlighting the label’s records and its best-known music. Billed as the “CTI All Stars,” the varying collective assembled each year between 1971 and 1975 playing stadiums and large venues like rock bands and reaching larger audiences than any one of the CTI artists could ever hope to reach on their own.

For this particular occasion, Taylor handpicked a dream team of CTI artists for what would become California Concert: The Hollywood Palladium, one of the label’s first all-star live assemblages. The concert was an absolute success, featuring George Benson on guitar, Freddie Hubbard on trumpet, Hubert Laws on flute, Stanley Turrentine on tenor saxophone, Hank Crawford on alto saxophone, Johnny Hammond on organ and electric piano, Ron Carter on bass, Billy Cobham on drums and Airto Moreira on percussion.

It is one of the finest recordings in the whole CTI catalog and it contains all of the label’s star performers of the time at their very best, in often exciting interplay with one another, playing their CTI hits. Each was as likely as not to be on the other’s studio recordings too. That means great players at the top of their game playing with other great players at the top of theirs. Too few recordings in the whole of jazz have this much star power, this much great - and label-specific - music and this much great playing.

This definitive document of the first and best-known of the CTI All Stars concerts contains nearly all of the entire performance including all of the original 1971 LP’s five tracks, “Fire and Rain,” “Red Clay,” “Sugar,” “Blues West” and “Leaving West,” which though left off the 1987 CD issue of California Concert was included on the 1990 Epic/Legacy CD The Best of Stanley Turrentine.

The new two-disc set is also enhanced with other performances from the concert issued elsewhere, including Freddie Hubbard’s lovely take on “Here’s That Rainy Day” (previously issued on the 1990 Epic/Legacy CD The Best of Freddie Hubbard) and Johnny Hammond’s utterly riveting take on Carole King’s “It’s Too Late” (previously issued on the 2002 CD reissue of Johnny Hammond’s Breakout) as well as three never-before released tracks including “Impressions” (which introduces the entire all-star line up), George Benson’s marvelous take on Miles Davis’ “So What” and Freddie Hubbard’s funkier than expected “Straight Life” (with a great number of soloists including George Benson, offering a snatch of the groove the guitarist laid down for 1973’s “Dance”).

Also on the concert program was Hank Crawford’s never-before issued performance of “Never Can Say Goodbye,” but even though Sony mastered the song with every intention of including it on the two-disc program, it simply didn’t fit. Disc one amounts to 77:50 of playing time and disc two tops out at 76:06.

This sort of all-star jazz concert was not only the exception to the rule back in 1971. It is nearly unheard of today. There are probably quite a number of reasons for this, chief among which is probably the lack of true jazz stars still alive and labels such as CTI Records that house so many prominent jazz recording artists. It’d be hard to gather a comparable line-up of jazz stars on the level of what CTI did for their all-star dates in general and California Concert: The Hollywood Palladium in particular (indeed only Laws, Carter, Cobham and Airto are still with us today). Sure, Hubert Laws and Airto Moriera showed up for several recent CTI All Stars dates in Europe. But it’s not the same anymore.

And many CTI fans may wonder whether Sony will ever release the 1972 Hollywood performances issued on three 1977 CTI LPs, the remainder of the July 19, 1971, concert in Los Angeles that have yielded several bonus tracks on other CDs or other well-recorded, though bootlegged recordings of the CTI All Stars captured live in Munich (1972), Seattle (1973) or New York City (1975). All of these are especially unlikely to ever see official release from Sony or Sony-licensed labels. So I would suggest enjoying California Concert: The Hollywood Palladium, not only the pinnacle of the CTI All Stars, but also the only recording of this assemblage we’re likely to enjoy on an official level.

The masterful California Concert: The Hollywood Palladium is an absolute classic, filled not only with great players playing at or above their best, but also brimming with some of the era’s most definitive music. This is an essential addition to any jazz collection and a strong argument for just how good jazz could be in the early 1970s – especially for those who think otherwise: proof positive that CTI Records not only had much to say to jazz listeners of the day but to true music lovers of all generations.
Posted by Douglas Payne at 5:25 PM

Why don't you think any of the other concerts will be reissued? I wish Sony Masterworks would do a 2 CD release featuring both volumes of the the Hubbard / Turrentine "In Concert" albums. There is probably more unreleased tracks that could fill out two discs:
http://feedback.legacyrecordings.com/forums/6333-reissue-requests/suggestions/77261-cti-jazz-concerts-unedited-on-2-cd-sets

Sony has only six more CTI titles scheduled for release, including "White Rabbit" by George Benson, "All Blues" by Ron Carter (first time on CD outside of Japan), "Prelude" by Deodato, "Pure Desmond" by Paul Desmond, "Concierto" by Jim Hall, and Milt Jackson's "Sunflower." These are due in January 2011. They have confirmed to me that no other CTI releases are currently scheduled. But if they do decide later on to continue their CTI reissue program there are several reasons why additional CTI All Star releases are highly unlikely. The Hubbard/Turrentine concert albums, which are NOT CTI All Star dates, do seem like a reasonable and likely future release. Good thing you let Sony know your interest in that.

Hello Doug. It's always a pleasure to read your reviews and commentaries. I found out about the California Concert 2-cd set release through your site and it got me really excited! I do have the Japanese cd release of the CTI Hollywood Bowl 3-LP set. I am still waiting for someone to release the great Tappan Zee recordings of Mark Colby and Joanne Brackeen!!! How much longer will we wait? Thanks again. Nick

You mention Hank Crawford's rendition of "Never Can Say Goodbye" was mastered for inclusion but they left it off because of time constraints. My question is, why didn't they just simply make it a 3 disc set so they could include the entire program? It really wouldn't have raised the retail price that dramatically (maybe $3 or $4) & the album has already paid for itself when it was originally released in the 70's on vinyl.