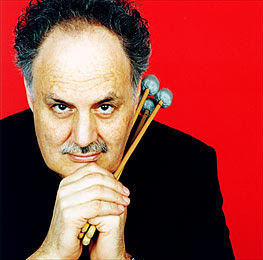 One of the few sounds I’ve long enjoyed in jazz belongs to vibist and marimba player David Friedman. Regrettably, his name does not resonate with the same clarity of former heroes of the instrument as Lionel Hampton, Milt Jackson or Bobby Hutcherson or new title holder Joe Locke. And somehow he even barely registers on the many albums on which he’s appeared. But he’s been involved in as many historic recordings – though not as any sort of progenitor – as his vibes-oriented predecessors.

In pop, he can be heard on the recordings of Tim Buckley, Yoko Ono (Feeling the Space, Seasons of Glass), Blood, Sweat and Tears, Chic, Lucy Simon, Norma Jean, Grace Slick, Billy Joel and both the Broadway and Hollywood recordings of The Wiz.

David Friedman was born in New York City on March 10, 1944. His father was an amateur violinist and while young Dave played a variety of instruments, he studied drums with Stanley Krell. He was a percussion major at Julliard, while at the same time studying with Saul Goodman and Moe Goldenberg, then with Teddy Charles and Hall Overton. Early in his career, Friedman played with many orchestras, performing much classical music, and has long served as a clinician (Ludwig, etc.) and published several books on vibraphone technique.

The sound David Friedman makes almost begs for the background, though it’s never simple, simplified or simplistic. He’s an accomplished accompanist in the sense of many great thinkers who, for whatever reason, don’t move forward as leaders as, perhaps, they ought to. He’s not showy, not pop-oriented and not willing to do more than explore the contours of a melody – however introspectively such a journey takes him. He’s exactly the kind of musician another leader needs. He plays just enough, never too much and never too little, but enough to make the performance succeed as an integrated whole.

His lack of notoriety is a shame, though, because David Friedman is one hell of a commanding leader. The basic concept of Double Image is proof enough. And the few albums under Friedman’s own name offer enough evidence of this. He composes like some other highly-touted percussionist/composers (Paul Motian and Joe Chambers spring to mind): with an ear to melody - obvious or not - that allows for much creativity and spontaneity and often a hook that provides something for even the least-committed jazz fan to hold on to. Pretty as it all is, the underlying fire is enough to convince someone that what Friedman is doing is sincere.

David Friedman issued Winter Love, April Joy (East Wind/Inner City) in 1975, the first album under his own name, with the great Dave Samuels manning a second set of vibes and marimbas, Hubert Laws on flute and piccolo and Harvie Swartz on bass. This led to Friedman’s formation of “Double Image” – a vibes/marimba band, co-led with Samuels, who shortly hereafter became famous for joining the popular Spyro Grya outfit. The first official Double Image release would come several years later with the marvelous Dawn (ECM, 1978). Several more Double Image releases were to follow.

Since 1989, David Friedman has headed up the jazz department at the Hochschule der Künste in Berlin, Germany, while also serving as professor of jazz studies there. He continues to record on an infrequent basis (that I know of) and has issued a Double Image duo recording, caught live in 2006, on his own label called Moment to Moment. Find out more about David Friedman here.

Here’s an outstanding performance of “Moment to Moment” from the 2006 CD of the same name by Double Image, a vibes duet between Dave Samuels and David Friedman:

His work on IN PURSUIT OF THE 27TH MAN is absolutely sublime, and a tribute to Horace stepping out of his comfort zone. Thanks for this post, now to investigate some of his other work!

I enjoyed this artist when he played as a guest of Limerick Jazz in the West of Ireland last night as half of Duo Elegance with Peter Weniger. Interested to read about his other collaborations.