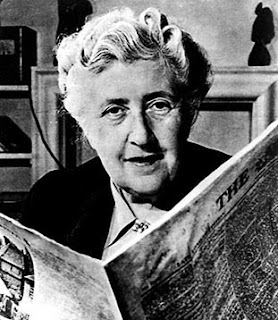 The New Yorker
A Critic at Large
"Queen of Crime: How Agatha Christie created the modern murder mystery."
by Joan Acocella
August 16, 2010

Abstract: The detective story was invented by Edgar Allan Poe, but he wrote only four of them before he lost interest. The first “career” practitioner of the genre who is still important to us today is Arthur Conan Doyle. Agatha Christie, who began publishing detective fiction thirty-three years after Conan Doyle, elaborated upon the traditional rules of detective fiction, in sixty-six novels published between 1920 and 1983. According to a number of sources, her books have sold more than two billion copies, making her the most widely read novelist in history. In the past year, two books on Christie have emerged: “The Duchess of Death: The Unauthorized Biography of Agatha Christie” (Phoenix; $25.95), by Richard Hack, and “Agatha Christie’s Secret Notebooks: Fifty Years of Mysteries in the Making” (HarperCollins; $25.99), by John Curran. Christie was born in 1890 and grew up in a seaside resort in Devon. She married Archie Christie, a member of the Royal Flying Corps, just after the First World War began. After the war, the couple settled in a London suburb, and Christie began writing novels. Describes a mysterious episode where Christie disappeared from home for ten days. In Christie’s novels, the murder that sets the plot in motion is rarely shocking. Furthermore, the victim is ordinarily someone with whom we do not sympathize. Christie created two famous detectives: Hercule Poirot and Jane Marple. In Curran’s “Agatha Christie’s Secret Notebooks,” the notebooks in question are school exercise books in which Christie worked out her plots. She made lists of possible victims, culprits, and M.O.s. Then she picked the combinations that pleased her. The writer thinks this shows Christie’s willingness to work by formula, and thereby to forego depth in favor of the puzzle. This practice exposed her to the contempt of some critics. The tradeoff is that Christie’s work is funny. A year after Christie’s divorce from Archie, she met an archeologist, Max Mallowan, in Iraq, whom, soon afterward, she married. In her mid-forties, she began to weary of writing, and she turned to drama—and then to film and TV—for which she adapted her novels and stories. She died in 1976, at eighty-five. For today’s readers, one pleasure of Christie’s books is her portrait of the times: the period between the two world wars, and, above all, the changes that took place after the second war.

Read the full text of this article in the digital edition of The New Yorker magazine (subscription required).
Posted by Douglas Payne at 6:47 PM