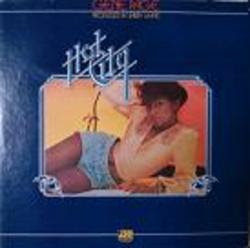 The first of two albums arranger/conductor Gene Page (1939-98) waxed for Atlantic Records, Hot City dates from 1974 and was made at the height of Barry White and Love Unlimited Orchestra’s success.

Page, who had already scored the funky Blacula (1971) and helmed many Motown sessions as well as any number of others for The Everly Brothers, Barbra Streisand, The Mamas and the Papas and Dionne Warwick, was providing the ultra-lush arrangements for White and his various groups at the time, when they were scoring their biggest hits. White repays the favor by providing Page with half an album’s worth of songs – including a slightly rougher edged take on LUO’s “Satin Soul” – and front-page production (“Gene Page Produced by Barry White”).

Hot City , one of the only fully instrumental albums issued under Gene Page’s name, features much of what makes so much of the composer and arranger’s work so interesting.

While Page could get unnecessarily syrupy – particularly on soulful ballads – his arrangements more often than not spring forth with dynamic ideas, inventive counterpoints and some of the most deliciously jazzed-up flourishes heard in popular music. It’s a majestic combination of everything from R&B and jazz to orchestral soul and classically-influenced easy listening – something Page was doing before those folks in Philadelphia got famous for the same thing.

All this is amply displayed on the three excellent compositions featured here: Page’s brilliantly funky “Jungle Eyes,” and the two songs Page co-wrote with frequent musical partner, brother Billy Page, “Cream Corner (Get What You Want)” and “To the Bone.”

On board here are many of the same musicians who played on Stanley Turrentine’s Pieces of Dreams (Fantasy, 1974), which was produced the same year by Gene and Billy Page, and include Ernie Watts on flute and sax solos; Clarence McDonald, Gene Page and Barry White on keyboards; Ray Parker Jr., Dean Parks, Melvin (Wah Wah) Ragin and David T. Walker on guitar; Wilton Felder (of The Crusaders) on bass; Ed Greene on drums; Joe Clayton on congas; Gary Coleman on percussion; and strings arranged and conducted by Gene Page.
Posted by Douglas Payne at 3:07 PM

This is just one fantastic album and after 38yrs sounds so good today.
Please Atlantic - get this out on cd for the rest of the world to enjoy everlasting quality.

I loved Gene and Billy and miss them every day. I hear their music everywhere--on the car radio, in the stores, and even on American Idol. They are much loved and sorely missed. Forever, you two...