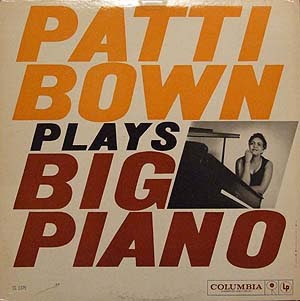 Pianist Patti Bown (1931-2008) is best known for her work on a number of Quincy Jones records, starting with The Birth of a Band (Mercury, 1959) through Quincy Jones Plays Hip Hits (Mercury, 1963) and was notably part of the troupe of American musicians that accompanied Jones on the ill-fated European tour of Free and Easy.

Patti and Quincy were apparently childhood playmates and Jones, who of course went on to become a top-tier composer and arranger in New York’s studio scene in the fifties, first covered Bown’s “G’won Train” on his seminal I Dig Dancers (Mercury, 1961) and then again on Quincy Jones and his Orchestra at Newport ‘61 (Mercury, 1961), also with Patti Bown.

In his obituary, Paul de Barros, Seattle Times jazz critic wrote, “Born Patricia Anne Bown in Seattle in 1931, Bown was one of five daughters and two sons raised in the Central District [of Seattle] by Augustus and Edith Bown, who moved to Seattle in 1921. Music and culture were central to her upbringing. Her mother took her see Marian Anderson, Katherine Dunham and Arthur Rubenstein, and the Bown household was known for its weekend ‘at-homes,’ where people played music, and discussed books and politics.

“Miss Bown's sister, Edith Mary Valentine, became a concert pianist in an era when it was difficult, if not impossible, for African Americans to enter the classical field. Millie Russell, another sister, recalled Patti at 3 years old astonishing their parents by copying on the piano what she heard Duke Ellington play on the radio.

“In 1949, Miss Bown won a music scholarship to Seattle University, and in 1952 she performed with the Seattle Symphony. She later transferred to the University of Washington, then moved to New York in 1955. Because of her excellent sight-reading and improvising skills, she was soon in demand in recording studios.”

Either Bown stopped her busy studio recording schedule around 1968 or, mysteriously, her name no longer appeared on records on which she appeared.

Patti Bown Plays Big Piano (Columbia, 1960), a terribly gimmicky title that can only be meant as a play on the pianist’s initials (“PB plays BP”), was the only record ever issued under Bown’s own name.

Recorded during three sessions between September and October 1959 with bassist Joe Benjamin and drummer Ed Shaughnessy, the album mixes several of Ms. Bown’s groovy, gospel-like originals (“Nothin’ But The Truth,””Waltz de Funk,” “Head Shakin’,” the original version of “G’won Train”) with some pleasingly off-beat tunes by some well-known composers.

The number of apostrophes in the originals should give you a clue as to what you’re in for: “head shakin’, foot tappin’, finger-snappin’, happy, melodic jazz.” Horace Silver and Oscar Peterson would seem to be the most obvious influences on Miss Bown’s playing and there’s little doubt of Duke Ellington’s pianistic persuasion.

But Miss Bown strongly calls to mind such contemporaries as Bobby Timmons, Gene Harris and Ramsey Lewis and would perhaps have touched upon some of their fame had she taken or been offered more consistent solo recording opportunities.

The covers reveal Miss Bown’s already well developed interest in show tunes: the effectively blues-drenched “It Might As Well Be Spring” (from the 1945 film State Fair), “I’m Gonna Wash That Man Right Out of My Hair” (another Rodgers & Hammerstein staple from the 1949 musical South Pacific), the fractured waltz of “Sunshine Cake” (from the 1950 film Riding High),the spunky, Oscar Peterson-like ”Give Me The Simple Life” (from the 1946 film Wake Up and Dream), the spiky, near Brubeck take on “I Didn’t Know What Time It Was” (from the 1939 musical Too Many Girls) and the spunky “Always True To You In My Fashion (from the 1948 musical Kiss Me Kate).

Here, she sounds more like a particularly muscular cocktail pianist, playing pretty enough to be enjoyed but with enough forceful originality to warrant attention. Miss Bown’s reluctance however to explore the jazz canon here indicates a pianist who is more eager to entertain than enlighten. And that’s just fine.

Patti Bown Plays Big Piano is superbly entertaining piano trio jazz and offers not only the original version of the bluesy “G’won Train” – which has been considered a descendent of sorts of Ellington’s “Happy Go Lucky Local” (aka “Night Train”) – but several of Miss Bown’s similarly interesting originals.
Posted by Douglas Payne at 1:18 PM