Zbigniew Seifert “Man of the Light” 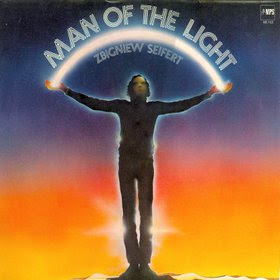 The great German reissue label, Promising Music, continues its fine tradition of rescuing some of the terrific and very obscure music issued by MPS Records with this release of violinist Zbigniew Seifert’s tremendous Man of the Light. This 1976 recording, issued in the United States by Pausa Records, should have made the Polish violinist a star in jazz circles. It is certainly as good as, if not better than, any of the records contemporaries Michal Urbaniak or Jean-Luc Ponty were putting out at the time.

But nothing like that ever happened. In fact, this straight-ahead record sunk to the bottom of everybody’s pile in the days when fusion reigned supreme and jazz violinists like Urbaniak and Ponty were actually gathering a certain amount of fame and notoriety “playing the game.” Man of the Light is a superb record that’s more notable, more timeless and, ultimately, more memorable than just about any of the fusion music coming out around the time. Now, three decades later, long after the death of fusion (and Seifert himself), Man of the Light makes its way into the digital age…and jazz listeners are all the better for it.

Zbigniew Seifert was born in Cracow, Poland, on June 6, 1946. After training in the classical tradition, he began playing jazz (“to get girls”) in 1961 with Eje Thelin, the Swedish trombonist. He started playing in the Tomasz Stanko Quintet (Music for K) in 1970, where he played both alto sax and violin. “From Stanko I learned how to produce free music – not only in the jazz sense but improvised, collective free music.” Soon, Siefert would dedicate himself solely to the violin. He relocated to Germany in the mid 70s where he continued recording with Stanko as well as Michal Urbaniak, Jasper Van’t Hof, Volker Kriegel and Charlie Mariano.

Zbigniew Seifert, or “Zbiggy” as his friends knew him, lost a long battle to cancer and died on February 15, 1979, at the terribly young age of 32 – just when he was starting to make a name for himself in jazz. Unfortunately, it wasn’t enough to make him the legend he deserved to be.

Man of the Light is an ideal place to become acquainted with Zbigniew Seifert and his remarkable musical world. Two of Seifert’s idols are John Coltrane and McCoy Tyner. Seifert dedicates “Man of the Light” to Tyner. Of the former Seifert has said, “What I play on the violin, I imagine being produced by the saxophone. I admire Coltrane and try to play as he would if his instrument were the violin. That’s probably the reason that I avoid playing my instrument in the usual way, with all the well-known effects. As far as I’m concerned, I follow the path taken by Coltrane.”

MPS was the perfect place to capture Zbigniew Seifert. MPS had long revered jazz violinists, recording pretty much all of the art’s practioneers, from Joe Venuti, Stuff Smith, Stephane Grappelli, Svend Asmussen and Ray Nance to Jean-Luc Ponty, Michael Urbaniak, Didier Lockwood and the great Don “Sugar Cane” Harris. Producer Joachim Ernst Berendt also had an ear for fine talent from the far reaches of Europe and he captures Seifert here in a stunning group featuring Joachim Kühn on piano (on four of the album’s six tracks), American great Cecil McBee on bass (on five tracks), American great Billy Hart on drums (on four tracks) and keyboardist Jasper Van’t Hof (on one track).

It’s an engrossing and, ultimately, enchanting program, particularly if, like me, jazz violin is something of an acquired taste for you. The album is a heady mix of powerful and creative improvised music that is reminiscent of McCoy Tyner’s music of the period. Pianist Joachim Kühn is particularly impressive here. Sticking to acoustic piano throughout and sounding like a mix of Tyner and Herbie Hancock, the pianist has never sounded better – doing some of his finest-ever recorded work right here.

It’s no surprise that drummer Billy Hart had worked with Tyner on the great 1970 album Asante (Blue Note) and 1974’s Sama Layuca (Milestone) while Cecil McBee would go on to play with Tyner on 1980’s 4x4 (Milestone) and 1987’s A Tribute To John Coltrane (MCA Impulse). As an aside, it’s a great pleasure to hear McBee and Hart together here. They’d first recorded together on a 1969 Pharoah Sanders album and subsequently were heard together creating an intoxicating blend of styles in exciting settings with Wayne Shorter, Norman Connors, Mtume and JoAnne Brackeen.

Everybody plays magnificently here. Seifert, in particular, is sensational. He plays with a distinction that isn’t often heard on violin – and certainly wasn’t as present on Passion, his final solo recording (which sounds more like Alice Coltrane than John Coltrane, even though this album’s gorgeous “Stillness” and “Love in the Garden” sound like something out of the Alice Coltrane songbook too). He’s playing as if his life depends on it. Perhaps it did. It sounds that way and that’s a passion you can’t fake. It’s captivating and very much worth hearing.

In a radio interview, Seifert was asked about his favorite of his own recordings and he said that it “is the record made in Europe in Germany for MPS. It is simply the record on which I placed all my musical dreams and desires from recent time. I’m absolutely proud of this record.”

As well he should be. It is a great record. And Promising Music is to be congratulated for making this terrific, long-lost classic available on CD. It is a treasure well worth discovering.