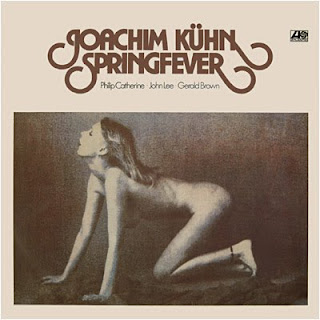 Despite a prodigious recording career, very few of virtuoso pianist Joachim Kühn’s records have ever made their way to the United States. By the mid-1970s, however, the German native, late of Paris, had briefly relocated to Southern California and contracted with the German arm of the American Atlantic label. The deal yielded six albums between 1976 and 1981 (not counting the 1988 Situations, a solo piano record), of which only two (1978’s Sunshower and 1979’s Don’t Stop Me Now) were recorded in the United States and, more surprisingly, only two were actually issued in the U.S., the aforementioned Sunshower and this one, Springfever, the pianist’s 1976 American solo recording debut – a second “debut” after the very different Impressions of New York, Joachim’s 1967 Impulse! album with his older brother and frequent recording partner, clarinetist Rolf Kühn.

Something of a child prodigy, Joachim Kühn (b. 1944) formally gave up classical music for the freer climes of jazz in 1962 and by the mid sixties had become one of Germany’s leading proponents of free-jazz exploration. Even from his first recordings with brother Rolf Kühn, who in 1964 was already a veteran of the German and American jazz scenes, it was clear that Joachim had made a profound and lasting impact on his older brother’s musical thinking. As rock began to emerge as a dominant musical force by the late sixties, Kühn succinctly merged this aggressive music with free jazz in the groups of Barney Wilen, Don Cherry, Alan Silva, Jean Luc Ponty, his brother Rolf and on many of his own free-spirited albums. Upon joining the legendary Euro-fusion group Association P.C. in 1973, Kühn started turning his attention to electronic keyboards, immediately achieving a more singularly notable result than many of the other switch-hitting keyboardists of the day had ever achieved.

Coming off a long string of records for Hans Georg Brunner-Schwer’s legendary MPS label with his brother – some of which are being released on CD later this month in honor of Rolf Kühn’s 80th birthday this year – and on his own, Joachim Kühn heads his first Atlantic album with an exceptionally electrified quartet featuring Belgian guitarist Philip Catherine (who first worked with Kühn in Jean Luc Ponty’s group in 1971) and Americans John Lee on bass and Gerry Brown on drums (who, together, had already released two albums on Blue Note and had both previously worked with Kühn and Catherine on the 1974 album Toots Thielemans And Friends).

The program of eight Kühn originals, recorded in Munich during April 1976, is typically eclectic and agreeably unpredictable. Indeed, it takes a few listens for some of the paths Kühn chooses to make sense as the journey is guided more by an artistic European sensibility than – at least as far as fusion goes – a more predictable and commercial American formula.

The long opener “Lady Amber,” featuring Polish violinist Zbigniew Seifert and German drummer Curt Cress, is a splendid sampler of the different keyboard textures Kühn can arrange to set the proper effect. While Seifert’s violin states the melody and offers occasional counterpoint, suggesting the fusion Jean Luc Ponty was promulgating at that point, Kühn very clearly makes his case for a significant voice of the jazz fusion movement with a strong sense of melodic invention and an iconoclastic logic of compositional structure. The ballad “Sunshine” is equally layered, but features Kühn’s acoustic piano on top, where his busy fingers traipse over the melody the way such classically trained pianists as Keith Jarrett or Paul Bley might had they chose to handle this sort of thing.

The solo “Spring Fever” especially reinforces Kühn’s fraternity with Jarrett. But here Kühn adds all sorts of notes, arpeggios and glissandi that Jarrett probably would have tempered a bit more than Kühn is inclined to do. While it doesn’t diminish the piece’s appeal, an enjoyably reflective sort of gospel folk music, it is the album’s sole manifestation of showy technique (form) over practical function, something Kühn is often guilty of elsewhere.

On the other hand, the funky “Two Whips,” “Morning” and “California Woman” each dominated somewhat more by guitarist Catherine, show how tremendously Kühn can serve a melody’s purpose with highlights and accents on just the right keyboard at just the right time. Curiously, when he lets others – particularly those as strong as Philip Catherine – state the melody or the theme as is so often the case on brother Rolf’s records, Joachim Kühn is more inclined to offer substantially more interesting solos or even pitch-perfect counterpoint. “Mushroom” and “Equal Evil,” both indistinct but nonetheless listenable slices of the fusion pie Kühn serves here, round out the program as good presentations of Kühn’s electric eclectics.

Oddly, Joachim Kühn was not heard on many other records available in America during the period other than Joe Henderson’s Black Narcissus (recorded in Paris in 1974 and California in 1975 before Kühn relocated to California), Dutch guitarist Jan Akkerman’s eponymous 1977 album (also not recorded in the U.S. – but like Springfever, an American-issued LP made available on CD recently by Wounded Bird), Billy Cobham’s Magic (Columbia, 1978) and on one track from Larry Coryell and Philip Catherine’s Splendid (Elektra, 1978).

Perhaps the less said about Kühn’s American follow-up, Sunshower (Atlantic, 1978), the better. All Music Guide’s Thom Jurek summed it up best, saying it “is one to be avoided at all costs.” Kühn moved briefly to New York in the early eighties, where brother Rolf resided some twenty years before, and recorded the excellent Nightline New York (Inak, 1981) with Michael Brecker, Bob Mintzer, Eddie Gomez and Billy Hart.

But now the Internet makes it much easier to find and sample Joachim Kühn’s music, particularly the many CDs he’s recorded for many labels like CMP, Owl, ITM, Label Bleu, ACT and Verve since the mid eighties and, more specifically, this fine collection of jazz fusion.
Posted by Douglas Payne at 1:52 PM

Why the need to slag Sunshower? I enjoy the album and it has great guitar work from Ray Gomez,a incredible musician that, like Kuhn, most people have heard very little of. Otherwise, great review.