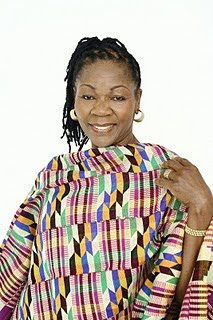 South African singer Letta Mbulu possesses one of the finest voices the world of song has ever known. Like all great singers, her voice emanates a beautiful sound that radiates and resonates from deep within, brimming with a joy of life and more often than not inspiring the spirit of hope and happiness. It’s musical like too few voices ever are. It attains grace through pure passion. And it’s one of the most pleasurable sounds ever heard.

The beautiful Letta Mbulu (pronounced "let-ah" "em-boo-loo") was born on August 23, 1942, in the area of South Africa that would become known as Soweto, a sprawling group of townships 20 kilometers outside Johannesburg built to house the city’s black workers.

Still in her teens, Letta began touring outside of Africa with the musical "King Kong," which ran for a year in England following a highly successful two-year run in South Africa. When the tour ended, she returned to South Africa but soon the policies of Apartheid were to force her to leave her native land for the U.S.A.
She arrived in the United States in 1965 and quickly befriended such fellow South African exiles in New York City as Miriam Makeba, Hugh Masekela and Jonas Gwangwa - all alumni of the "King Kong" musical. Performances at New York's famed Village Gate club began to attract attention to her talents, particularly from jazz legend Cannonball Adderley, who invited her to tour with him (which she did throughout the remainder of the decade).

Letta Mbulu also displayed an early gift for writing joyful, memorable songs. These were showcased by no less an authority than Miriam Makeba on the great singer's albums The Magnificent Miriam Makeba (the great "Akana Nkomo"), All About Miriam ("U Shaka," and the hit-worthy "Jol'inkomo") and the tremendous album Makeba ("U-Mngoma," "Magwala Ndini").

Letta first made herself heard on records as part of Letta and the Safaris, a group featuring husband Caiphus Semenya and the South African husband and wife team of Jonas and Mamsie Gwangwa. A single, “Walkin’ Around” b/w “For God and Country” was issued in 1966 by Columbia Records (home at the time to Bob Dylan and Simon & Garfunkle), but lack of publicity failed to garner much attention to the clever little R&B swinger.

Letta and Caiphus soon relocated to the West Coast, joining Hugh Masekela, who became a fixture of the California concert and recording scene. Letta Mbulu shortly thereafter recorded Masekela’s “What’s Wrong With Groovin’” as a solo artist for a small label which captured much attention in the 90s as an acid jazz classic when the British Jazzman label picked it up for release. While in L.A., producer David Axelrod fell under Letta's spell and had her signed to Capitol Records - home at the time to both the Beatles and the Beach Boys and where Axelrod himself was scoring big hits for Lou Rawls and Cannonball Adderley. Axelrod produced Letta's debut album, Letta Mbulu Sings (Capitol/1967), an immediately attractive collection of Township-style pop mixed with American R&B. It was a hugely enjoyable style that Ms. Mbulu and her collaborator/husband Caiphus Semenya could nearly patent as their own.

Even though a single was released (the magnificent "Ardeze" b/w "Pula Yetla"), radio stations wouldn't play the record out of fear that no one would understand the words (the Bossa Nova and the British were as multi-cultural as American radio was willing to get back then). As a result, hardly anyone ever heard the record and, worse, sales were slight.

Axelrod convinced Capitol to give Letta another chance. The following year he produced the singer's majestic Free Soul, as near perfect a collection of afro-pop as has ever been waxed, this time dropping Letta's surname, but in odd contrast, featuring the beautiful young Letta on the cover swathed in colorful afro-centric clothing. Letta’s two Capitol albums were compiled onto one CD by the British Stateside label in 2005.

Meanwhile, Letta toured often (fronting a piano trio led by fellow South African exile Cecil Barnard) and recorded frequently as part of musical aggregates put together by Hugh Masekela - most spectacularly as part of the anonymous collective known as Africa ‘68, where she took the lead on “Uyaz’ Gabisa,” “Noyana,” “Aredze” (which she’d performed earlier on Letta Mbulu Sings) and “Kedumetse.”

When Masekela and business partner/producer Stewart Levine first formed their Chisa Records label, Letta Mbulu was one of the first artists they signed. They issued a 45-only record of “Little Star” b/w a much more invigorating version of the Masekela/Mbulu song “I Haven’t Slept” than Hugh issued on his own. In 1970, Chisa issued the first of two Mbulu albums bearing only her first name (the second is from 1978 on A&M). 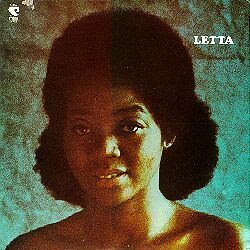 Letta is a magnificent sample of African-American soul, bearing the UK dancefloor classic "Mahlalela" (written by husband Caiphus Semenya), Mbulu's great "Use Mncane" (an amazing song that beautifully showcases Mbulu's gorgeous vocal capacities), "I Need Your Love" (which could've easily been a hit), Masekela's fine "Macongo" and a Mbulu perennial in husband Semenya's anthemic "Jigijela." Some of these are featured on the 2005 CD Hugh Masekela Presents The Chisa Years 1965-1975 (Rare And Unreleased).

Unfortunately, the Chisa label lost its independence in 1971 and was unable to issue another album Letta Mbulu had recorded that year – although two of the songs, including the great Motown-ish sounding “I’ll Never Be The Same” turned up on ultra-rare European copies of the Letta Mbulu Gold (Motown, 1977) album. Mbulu continued to tour, often with Harry Belafonte (she can be heard on her own for several pieces on the great singer's album Belafonte...Live!). In 1973, the singer accepted a part in the Sidney Poitier's film A Warm December (as a singer!) and issued the album Naturally for Cannonball Aderley's label, Fantasy Records – which has just been issued for the first time on CD by the great British label, BGP. Indeed, Adderley and Mbulu were finally paired for the first time on record for several of the album's songs. It's here that the L.A. stamp on Mbulu's still-true take on African township pop starts to reveal itself. Songs like "Kube" (covered recently by South African singer Lebo M), "Noma Themba," "Hareje" and "Zimkile" reflect how comfortable - maybe a little slick - Mbulu could be at the crossroads of African and American music. 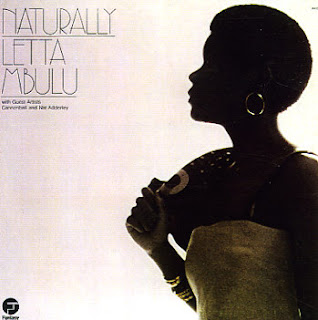 Mbulu raised the bar even higher when Herb Alpert (through Hugh Masekela) signed the singer to the trumpeter's high-profile A&M Records label. The first of two albums, There’s Music In The Air is a another Afro-soul masterpiece that should have made Letta Mbulu a household name. Each song is a wonderful, intoxicating concoction that yields such endless aural delights as Joan Armatrading's "Let's Go Dancing" (featuring Lee Ritenour and Richard Tee), Caiphus Semenya's "Mara A Pula," "Rainy Day Music" and "There's Music In The Air."

Composer and inveterate hit-maker (on his way to making Michael Jackson the king of pop) Quincy Jones then recruited Letta Mbulu to become the voice of Roots. Contributing to the historic 1977 soundtrack, Mbulu is best remembered for interpreting husband Caiphus Semenya's moving "Oluwa" aka “Many Rains Ago,” which was actually written several years before for another project.

The 1978 album Letta (A&M) yielded several wondrous performances, including "Buza," "Baile Baneso," "Hareje" and "Mamani," but sadly no big hits. Another album recorded for A&M ended up coming out in 1980 on several different label(s) throughout the world as Sound of a Rainbow and yielding a sizeable disco hit in "Kiliminjaro." However, there was no album in the United States and, in fact, no album under Letta Mbulu's name has been issued in the United States since 1978's Letta.

But Letta Mbulu continued a busy - and diverse - career here in the states. In 1980 Letta Mbulu participated in an Africa Week concert in Montreal that yielded the magical An Evening of African Music With Letta Mbulu, issued in Canada in 1983.

In 1981, she narrated the documentary film You Have Struck A Rock about African women's campaigns of non-violent disobedience. In 1983, she worked on husband Caiphus Semenya's first recording under his own name, Listen to the Wind, which yielded a huge dance hit in the lovely "Angelina."

In 1984, Letta Mbulu sang on Quincy Jones's soundtrack to The Color Purple. In 1987, she was heard (if ever too briefly) as the other woman on Michael Jackson's "Liberian Girl" from the album Bad. Later, Mbulu appeared in such musical plays as husband Caiphus Semenya's Buwa (which was a presentation of the group, South African Artists United (SAAU), of which Mbulu was a co-founder) and Mbongeni Ngema's Shiela’s Day.

Letta Mbulu and Caiphus Semenya finally returned to South Africa in 1991, after 26 years in exile. The singer also finally returned to records in 1992 with the remarkable Not Yet Uhuru, her first album recorded on South African soil. It was arranged and produced by Mbulu's multi-talented husband, Caiphus Semenya, who also composed most of the material. Check out Letta challenging any contender on "Not Yet Uhuru," Semenya's brilliantly arranged "Home Brew" (showcasing Letta Mbulu rapping) and "Kushukiti."

In 2001, Letta Mbulu was honored by the South African Music Awards for lifetime achievement. She has continued to sing on husband Caiphus Semenya's many projects that continue to earn the couple a legendary and royal status in South Africa. But while Letta Mbulu continues to perform actively in South Africa, she has only sporadically recorded as a soloist (2007’s Culani Nami is her most recent album and it’s only available in South Africa) and does not have the name or presence she deserves outside of South Africa or certain European underground circuits.

I had hoped to issue a compilation of Letta Mbulu's American work, circa 1968 to 1978, recently. But the set I proposed and worked on was cancelled for various reasons. It’s truly a shame. At this rate, the great artist and hugely talented entertainer might be relegated to cult status, known and respected only in her home country (which I’m sure is fine for her, but she deserves even more).

Certainly none of her music is currently in print in the United States (though her SA compilation Greatest Hits is available on iTunes if you’re willing to hear Ms. Mbulu's sonorously sensual voice in compressed formats). Letta Mbulu deserves far more. She deserves the elaborate treatment and endless compilations that all great artists are often afforded. Hopefully her art will be recognized sometime during her lifetime. Her artistry deserves the recognition and the compensation that great – and true – art deserves.

To find out more about Letta Mbulu and her wondrous music, check out my Letta Mbulu web site.
Posted by Douglas Payne at 10:44 PM