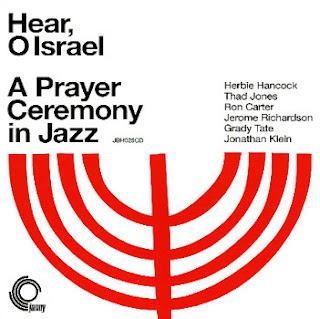 “In September of 1965,” according to Rabbi David Davis in the notes to this obscure and little-known record, “I asked Jonathan Klein to write music that would be fitting for the theme of our conclavette, ‘Sects And Symbols Within Judaism.’ The result of this request was the creation of [this] jazz concert. Jonathan, the son of Rabbi Joseph Klein of Worcester, Mass., was a seventeen-year old when he composed this concert.”

The Worcester performance apparently attracted huge crowds for each of its Friday services and the great response compelled Jonathan Klein to reassemble the combo to travel the country with this music. The concert was performed at Brandeis University and Wheaton College, and in Boston, Malden, Marblehead and New Bedford, Mass; Baltimore, Md; New York City and Brooklyn.

Somehow, in 1968, someone was able to gather some of the greatest jazz names of the day to record the music for LP release on the NFTY (New England Federation of Temple Youth) label. Klein’s piece was written for piano, bass, drums, trumpet, soprano, alto and baritone sax, French horn, flute, flugelhorn, and two voices. This unbelievable recording boasts such jazz heavyweights as Herbie Hancock, Ron Carter, Grady Tate, Thad Jones, Jerome Richardson and the composer, Jonathan Klein. The voices are provided by Antonia Lavanne, soprano, and Phyllis Bryn-Julson, contralto, and Rabbi David Davis reads the brief Scripture passages on “Torah Service-Adoration” and “Final Amen.”

The result is this amazing 40-minute performance that ranks among one of the finest pieces of mysterious 1960s jazz lore imaginable. This superb recording is one of the “jazz meets religion” albums that inexplicably prevailed during the sixties, like Paul Horn’s Grammy award-winning Jazz Suite on the Mass Texts (RCA, 1965), Duke Ellington’s A Concert of Sacred Music (RCA, 1966) and even John Coltrane’s historic A Love Supreme (Impulse!, 1964). 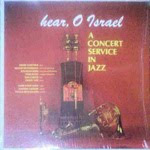 This extremely obscure album, which probably had a very small press run distributed to few – if any – commercial outlets, came to Jonny Trunk’s attention when he was going through a “jazz meets religion” phase in 1999. Apparently the record made very little impression. Several years later when he borrowed the record again, “it struck me that it was far more special than I had first realized.”

Trunk went about obtaining the rights to issue the music (which was easy), finding a clean copy of the record to transfer to CD (which was not as easy since master tapes were unobtainable and so few of the records were ever made that any in pristine condition were unlikely to surface) and coming up with new cover art to present it to a larger audience than it had ever known before.

The result is this spectacular CD, issued on the British Jonny label in 2008. This beautiful music, which Jonny Trunk calls “The Secret Herbie Hancock Album,” is spiritual jazz in the best and most pure sense. It also has a great mid sixties New York jazz vibe that can be put down to Herbie Hancock’s distinctive and remarkably appealing presence.

Hancock has told his discographer, Naoki Suzuki, that he has no recollection of this recording session. But if it’s not Herbie Hancock here, then it’s someone who sounds extraordinarily similar to Herbie Hancock circa 1968. The exceptional pianist is surrounded by distinctive Hancock associates such as Thad Jones (featured on 1968’s Speak Like A Child), Jerome Richardson (a frequent session partner and featured player on 1969’s The Prisoner), Ron Carter (Miles Davis Quintet, Maiden Voyage, Blow Up, Speak Like A Child and many, many other sessions) and Grady Tate (many sessions, particularly at Verve). Also, all of the principal jazz players featured here are also heard together on Kenny Burrell’s Blues, The Common Ground (Verve, 1968). So it’s a safe bet that it is indeed Herbie Hancock making the piano purr here.

And the music is, quite simply, divine. There are nine pieces in total; some short, some long. But all perfect in length to the drama of the performance at hand. Klein keeps the orchestrations simple and evocative, allowing plenty of room for particularly nice improvisations: Jerome Richardson (“Matovu – Bor’chu,” “Sh’ma,” “Sanctification,” “Kiddush,” “Torah Service-Adoration”), Thad Jones (“Sh’ma,” “Final Amen”) and Klein himself (“Micho Mocho”).

It’s hard not to favor the beautiful passages helmed by Herbie Hancock (“Matovu – Bor’chu,” “Sh’ma,” “Micho Mocho,” “Sanctification,” “Torah Service-Adoration,” “Final Amen”). The piano is often granted the greatest palette for improvisation. To these ears, it is the pianistic interjections – guided by Carter’s magnificent bass lines – which make this such a magical feast for the ears. Also, what happens on piano behind the soloists also proves it can only be Herbie Hancock on the piano.

The album is wondrous from start to finish. But the particular highlights include the modal magic of “Sanctification,” the bossa jazz of “Kiddush” and the bluesy modes of “Torah Service-Adoration.”

According to the notes, Jonathan Klein went on to Brown University in Providence, R.I. and the Berklee School of Music in Boston, where he participated in the Herb Pomeroy-supervised recording of Jazz In The Classroom – Volume XIII (1971). The All Music Guide lists a Jonathan Klein as “assistant music editor” on two John Ottman CDs, but, sadly, nothing else.

I have no way of knowing if it’s the same Jonathan Klein. But it would be nice to know what happened to the young prodigy who created the stupendously beautiful Hear, O Israel.
Posted by Douglas Payne at 11:57 PM

I attended Berklee 1972-77, and had Jon as a teacher for several harmony classes. Also took a few private lessons. Brilliant man. I was always curious about the Sabbath service, and just rec'd the reissue. Cannot find much info about him, but there's this:

which indicates that he's still operating. I wonder if he's benefiting from the British reissue...