Clarinetist Rolf Kuhn was born in Cologne, Germany, on September 29th, 1929. At the age of eight he learned to play the accordion and by the time he was twelve he was making an intensive study of the clarinet, piano and the theory of composition. Among his teachers was Hans Berninger, solo clarinetist in the Gewandhaus Orchestra at Leipzig, and responsible for musical theory was the director of music, Arthur Schmidt-Elsey.

However, the young musician did not feel suited for a career in classical music. Just before his seventeenth birthday, in June 1946, Kühn joined the Kurt Henkels Band as alto saxophonist and accordion player. Only a year later he was already standing out front improvising clarinet solos. His Amiga recording of “Rolly‘s Bebop“ won him a reputation as a rising star on his instrument, and then three years later, in 1950, his name shone out at the head of the list for top clarinet players in German jazz polls.

In 1952 Rolf Kühn moved to West Berlin and played for the first time in a quartet of his own at RIAS radio station. The way was paved to a successful musical career. Benny Goodman‘s musical expression had up to then formed his style but now Buddy DeFranco’s influence was on the ascendancy. In 1954 he got to know DeFranco personally during his stop at Berlin on the “Jazz Club USA” tour.

Meanwhile European jazz enthusiasts had time and again nominated Rolf Kühn as number one clarinetist. He set out for New York City, the jazz artist’s proving ground, in May 1956. Initial support for this venture was provided by the classical pianist, Friedrich Gulda, Benny Goodman‘s manager, Willard Alexander, and the critics Leonard Feather and John Hammond.

His career in the States started with quartet engagements in various jazz clubs. Then he appeared at the Hotel Pierre as soloist and musical director for internationally famed singer Caterina Valente, followed by an engagement in a program with Count Basie at Birdland.

It wasn‘t long before Benny Goodman took him into his own orchestra. The young man from Germany was to become the only other clarinetist that Benny Goodman would tolerate at his side: more than that, he actually entrusted him with the musical direction of the band during an illness.

In the summer of 1957 the triumphant tones of Rolf Kühn‘s clarinet were heard at the Newport Jazz Festival. A few months later he went on tour with the Tommy Dorsey Memorial Band. This was followed by further club engagements and recording dates, among them a Leonard Feather presentation on Metrojazz with an international sextet, a Verve production with a band featuring the vibraphonist, Eddie Costa and albums for Panorama and Vanguard under his own name.

Rolf Kühn returned to Germany in late 1961 and, as prodigal son and now something of an American jazz star, he set about on an ambitious recording and performing agenda. Where once, long ago, he might have been cast in the shadows of Buddy DeFranco or Benny Goodman, he had long since succeeded in developing his own voice and crafting a style that developed over increasingly more interesting albums on the Brunswick, Amiga, CBS, Impulse, Intercord, Metronome, Horzu, BASF and MPS labels.

In celebration of Rolf Kühn’s 80th birthday this year, the German arm of Universal Music is making five of the clarinetist’s most sought after and long out-of-print albums available for the first time ever on CD.

While there are many more albums the great clarinetist, composer and arranger participated in during this period, one can only hope that these few CD releases will reignite interest in the great and prolific Rolf Kühn and his extremely interesting musical career.

Rolf Kühn feat. Klaus Doldinger (Brunswick, 1962): One of Rolf Kühn’s first recordings in Germany after a long stay in the United States, this very engaging album recorded in late 1962 finds the clarinetist combining forces with future fusion pioneer Klaus Doldinger and his trio. The presence of organist Ingfried Hoffmann gives this group a flavor not unlike the Eddie Davis-Shirley Scott groups that recorded so prolifically around the time. But Rolf Kühn’s clarinet offers the proceedings an even more unique and likable essence. Anyway, how many other attempts at matching the clarinet with an organ group are there out there? A winner from start to finish. Features Rolf Kühn, clarinet, with Klaus Doldinger, tenor sax; Ingfried Hoffmann, organ; Herman Schoonderwalt, bass; Cees See, drums.

Transfiguration (Saba, 1967): A remarkably free session that finds brothers Rolf and Joachim Kühn sparring with a rather free-spirited European rhythm section featuring the young Karl Berger on vibes. Rolf dominates. But Joachim seems to be setting the agenda. Berger is a special guest indeed, befitting his “guest” status, even despite his lack of worldwide acclaim at this point. It’s hard to believe that Rolf’s early fans – or recent listeners – would go for this. But you have to respect the man for his chance-taking abilities. Features Rolf Kühn, clarinet, with Joachim Kühn, piano; Beb Guerin, bass; Aldo Romano, drums; Karl Berger, vibes. 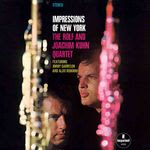 Impressions of New York (Impulse!, 1967): After appearing at the 1967 Newport Jazz Festival in another aggregation, Rolf Kühn and his brother were offered the opportunity to record for the fabled Impulse! label by producer Bob Thiele, who was issuing any number of free-jazz records by the movement’s lead provocateur, John Coltrane (as well as Archie Shepp, Pharoah Sanders, etc.). The Kühn brothers are caught here in a quartet with Coltrane bassist Jimmy Garrison (and Italian drummer Aldo Romano), during the same period of time that Coltrane actually died. This free-wheeling session is one of the few ways that any Americans even knew of the Kühn brothers, particularly Rolf (Joachim lived in the United States in the mid to late seventies for a time, releasing a few fusion-oriented albums through some American labels). Features Rolf Kühn, clarinet, with Joachim Kühn, piano; Jimmy Garrison, bass; Aldo Romano, drums.

Total Space (MPS, 1975): Like a crazy Blaxploitation soundtrack album of the period, this unusual free fusion album exposes much of the period’s oddly contradictory elements of rabidly exploratory talent mixing with (somewhat) commercial and funky expectations. Like many a MPS album of the period, there is some tremendous improvisation to be heard here by some engaging soloists. It would be interesting to hear what the surving members of this group might do ten years after this – or today. Total Space has much to recommend and stands strong not only as one of the strong European jazz releases of the mid seventies but also as an enduring remnant of the fusion movement of the period. Featuring Rolf Kühn, clarinet, with Albert Manglesdorff , trombone; Gerd Dudek, sax; Joachim Kühn, keyboards; Philip Catherine, guitar; Bo Stief, bass; Kasper Winding, Daniel Humair, drums plus brass.

Symphonic Swampfire (MPS, 1979): Rolf Kühn had not issued an album since Total Space some four years before. Immersed in the orchestral worlds of film and television, he had desired the opportunity to release a jazz album with more orchestral elements. Not exactly the orchestral jazz piece that Verve would have released some 15 years before, this is, nevertheless, a wonderful piece of funky fusion jazz. A tribute to the Ibiza home he’d resided in during the summers of the seventies, Rolf Kühn devised a most engaging album, and probably one of the more approachable works he’d done in some time. I did the notes for this particular release. But it really is my favorite of all of the five albums in the Rolf Kühn 80th birthday Anniversary Edition. Features Rolf Kühn, clarinet/arranger, with Charlie Mariano, sax; Herb Geller, sax and flute; Joachim Kühn, Thilo Von Westernhagen, Claus-Robert Kruse, keyboards; Philip Catherine, guitar; Niels-Henning Orsted Pedersen, bass; Bruno Castelucci, drums plus brass and strings.
Posted by Douglas Payne at 9:03 PM