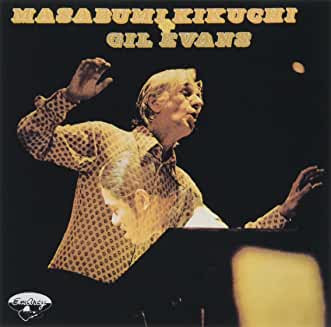 I first experienced pianist, keyboardist and composer Masabumi Kikuchi in 1981 on his American solo debut Susto (Columbia). Back then it was a riveting experience. Unlike anything I had ever heard before, Susto seemed to promise how exciting fusion jazz could be in the eighties. Masabumi Kikuchi would later be heard stateside in his Tethered Moon trio. But he’s had an extended discography of Japanese-only releases, including Masabumi Kikuchi + Gil Evans , recently reissued on CD on the fiftieth anniversary of its recording.

The legendary Gil Evans (1912-88) was always known – and revered – among listeners more for his successes with Miles Davis (Birth of the Cool, Porgy and Bess, Sketches of Spain) than his own recordings. In a career dotted with only the occasional studio date under his name, perhaps only Evans’s 1961 masterful Out of the Cool stands out.

But Evans helmed other such notable studio dates as the superb The Individualism of Gil Evans (1964), two sets with the great French band leader Laurent Cugny late in Evans’ career and this very special one with the hugely underrated Japanese pianist and composer Masabumi Kikuchi.

The two hit it off right away.

The following week, on July 5, 1972, Evans and Kikuchi were in a Japanese studio to record what was originally issued as a monumental double-disc set. Although billed as a Masabumi Kikuchi album (the Japan-only disc was originally issued on Kikuchi’s Philips label), this is very much a Gil Evans date…with the ever-respectful Kikuchi seemingly happy to be a special guest on occasional electric piano.

Sadly, though, no one in the States knew anything about this record at the time.

For Evans, MK+GE comes in between the studio-set Where Flamingos Fly - likely recorded for Capitol Records in 1971 but not issued until 1981 by the mail-order Artist’s House label and later on CD by A&M – and the well-regarded Svengali (Atlantic/1973), an album title that serves as an absolutely apt anagram of Gil Evans.

Kikuchi, who got his start as pianist in Sadao Watanabe’s band, was no stranger to playing with Americans. He’d already been heard with Charlie Mariano, Oliver Nelson, Gary Peacock (who would later factor in Kikuchi’s wonderful Tethered Moon trio with Paul Motian) and Joe Henderson. Here, Kikuchi sticks to electric piano, but with a much subtler hand than he was known for elsewhere at the time.

Originally, the double-disc MK+GE roughly reproduced the concert program from the week before, with the Gershwins’ “Gone” not surprisingly gone from the studio set. Unexpectedly opening with a brief but blustery version of Carla Bley’s “Ictus” announces that MK+GE was more about where its leaders stood in 1972, not 1958 – when Evans first waxed “Gone” with Miles Davis.

”Ictus” seems to have been a momentary fixation for Evans. He had waxed performances of Bley’s tune – originally written for the Jimmy Giuffre Trio in 1961 – for Svengali and his 1974 Montreux Jazz Festival performance, but neither version was ever released.

Billy Harper’s dazzling, cinematic yet consummately improvisational “Thoroughbred,” a staple of Evans’s repertoire in the early 70s, gets its second hearing here. Known better in its third recording – on Svengali - this pedigree is among its better iterations. “Thoroughbred” ranks up there with Evans’s own “La Nevada” as a definitive tune in the Evansography.

The intoxicating “Priestess,” another Harper original, opens evocatively with Evans’ ring modulator (and percussion), as though torching a flame, before offering up fiery solos from Peterson, Kikuchi and the composer then winds down in a smoldering flute outro. This is Evans’s first recording of “Priestess,” a tune which didn’t factor on another disc of his until a 1983 (!) release of a 1977 performance, also titled Priestess.

Worth noting here is the unusually protracted outros this album affords many of its songs. It’s the sort of thing most American record companies would typically fade out on. Not here. There is a sense of belonging in these outros, as though they were a necessary part of the songs’ arcs; the last act of a compelling short story by a Japanese novelist.

Evans’s own “Love in the Open” is, typically for him, more sketch than painting. The song first appeared on an absolutely underrated 1970 Ampex disc that was later reissued as Blues in Orbit by the German Enja label. At least here, “Love” feels like a mad mix of Lee Morgan’s “Search for the New Land” as if arranged by West Coaster Gerald Wilson and played by Sun Ra’s Arkestra. How great is that?

If Kikuchi sits out “Love in the Open,” then he takes a star turn on his own Evanescent “Drizzling Rain.” Superbly scored – with Evans beautifully employing Michiko Takahashi’s marimba to underpin the melody – Kikuchi seems to pluck Charles Lloyd’s “A Rose for Booker” for a more ornate garden of his own. Kikuchi first performed “Drizzling Rain” (as “Drizzing Rain”) on his 1970 album Collaboration with Sadao Watanabe, an album that also features “Lunar Eclipse,” another Kikuchi piece Evans often played.

Like “Ictus,” the stark and ever-so brief “Eleven” bookends the original program. It is another feature for Kikuchi’s electric piano. Credited to Evans and Miles Davis, “Eleven” is more of a lick to riff on than a full-fledged melody. This is Evans’s first recording of the bit, likely fashioned in the late 60s for an unreleased Miles Davis project.

When MK+GE was first issued on CD in 1989 (now on the EmArcy label), a second, equally long and seemingly more percussive take of “Love in the Open” was added. Also added was the genuine surprise of Billy Harper’s “Cry of Hunger.”

While both tunes were likely excluded from the original album due to Kikuchi’s more backgrounded presence, it turns out that this “Cry of Hunger” is the song’s first-ever recorded performance. Harper’s noteworthy original would not be heard by listeners until 1973 – on both Evans’ Svengali and the composer’s solo debut Capra Black.

Kikuchi permanently relocated to New York City around 1976, playing and recording with many musicians associated with Miles Davis in the seventies. Recordings around this period (1976-82) sound particularly Milesian and are well worth checking out. (Legend has it that the then-“retired” Miles and Kikuchi recorded together in 1978 – the results of which have never been released.)

Kikuchi also reunited with Evans during this period and can be heard on such later Evans recordings as Gil Evans Live at the Royal Festival Hall London 1978 (1979 – and never issued on CD) and both volumes of Live at the Public Theater (New York 1980) (1980 – which Kikuchi himself produced for the Japanese Trio label).

Throughout, MK+GE boasts the elegance of precision of earlier Evans recordings that was so often and likely intentionally absent on later recordings – even the all-too uneven RCA studio sets. The ferocity of the three primary soloists balances out any pretensions to prettiness or orderliness.

It is yet another example of the superb fusion of American and Japanese jazz players that too few Americans knew about at the time - and a real joy.

Posted by Douglas Payne at 3:38 PM

Love this record! Kikuchi and Gil were a great combination. Gil's performances with his own band at this time were great if a bit shapeless (too much weed?) but this record is the best of all worlds.

Would love to read more about the Milesian 1976-82 recordings—thanks for this review!