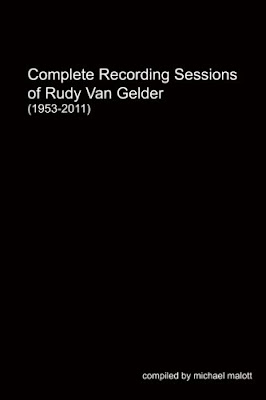 As a jazz researcher and serial discographer, I have relied on and been grateful for the great chroniclers and documentarians of recorded jazz. Not only is it an art to present a cohesive document of the messy history that makes up any one record, much less a whole body of recordings, it is a lot of work. A lot.

It takes much more effort than mere crate digging. Discographers are historians, pure and simple.

Those who have mastered this art are not especially well known among listeners who just want to enjoy the music. But for those of us who want to know more about who makes the music, how and when it is made and who else peoples the musical universe (in this case, jazz), discographers are teachers and their discographies are essential texts.

During my years of searching, digging and wanting to know more, I have relied extensively on the great work of Walter Bruyninckx, Michel Ruppli and Tom Lord. While their books are often expensive and found only in better libraries, I thought it necessary to own Ruppli’s Prestige, Verve and (with Michael Cuscuna, himself a great historian) Blue Note discographies and annual (or, for me, occasionally annual) updates of Tom Lord’s The JAZZ Discography on CD-ROM.

Such mad compunction made me shell out sixty bucks for Michael Malott’s Complete Recording Sessions of Rudy Van Gelder (1953-2011). Apparently first published in 2017, I wondered how I had never even heard of this “print on demand” book.

Rudy Van Gelder (RVG) factors in a huge amount of the work I have chronicled and a “complete recording sessions” of his is of significant interest to me. Imagine my surprise, then, when I accidentally stumbled over this listing on Amazon – incidentally, while searching for something completely different. After some internal debate about just how “complete” a nearly 500-page book on RVG could be, not to mention the price tag, I went ahead and clicked “Buy Now.” I was better off to “buy no.”

This is a maddening book.

It is hopelessly incomplete and contains almost no information that hasn’t been readily available elsewhere for years. A simple search for Rudy Van Gelder on Discogs yields 4611 (as of this writing) Technical credits.

While this number includes mixing and mastering credits that are not necessarily recording sessions, Malott’s book lists far less. I would guess somewhere around 1500 sessions – clearly on the low side – but I don’t know because Malott neither numbers his sessions, nor, worse, indexes anything.

Malott doesn’t bother to explain how he researched his subject or where he got any of his information. Much of it could have come from Ruppli’s Prestige and Blue Note books. The rest could have come right off the internet.

Since the word “complete” is in the title, I was counting on Malott to have worked with Van Gelder himself (or Maureen Sickler, RVG’s assistant for many years) in gathering the detail, either from RVG’s notes over the years or logs he might have kept. Nope. As there are no acknowledgements in the text – a common feature of any historian’s work – there is likely no reason to believe Malott consulted with RVG at all.

There is so much wrong with this book. Let’s start with the title. First, there is nothing “complete” about Malott’s text. We’ll get to that. Next, the book chronicles not “recording sessions” but actual released recordings. While Malott generally indicates any disc’s various dates, it doesn’t show how RVG recorded – or re-recorded – multiple artists on any one day.

In other words, this “complete” book wholly lacks any unissued, abandoned, overdubbed, corrective or replacement recordings, no singles (or, for that matter, any pop recordings)…all the messy details that go into a carefully engineered recording.

Here is how much completeness I was willing to delve in to. I am sure there is so much more:

Vox: Malott briefly notes early on that RVG mastered dozens of recordings for the budget classical label, Vox Records. Many of these records were cheaply recorded in Europe and American concert halls and Van Gelder was hired to clean them up. In the fifties, Vox, Blue Note and Prestige were RVG’s biggest clients, essentially building his business and cementing his legendary reputation.

But RVG also recorded a number of the Vox label’s smaller groupings (solo, duo and trio discs), something Malott acknowledges but never properly identifies. Of those Vox titles – like Kenny Clarke’s Spotlight on Percussion (1955), Holidays for Percussion (1958) and Josquin des Pres’s Choral Works (1960) – none are identified here.

Creed Taylor, Part 1: None of the first three known (to me) collaborations between RVG and Creed Taylor are listed here: Jazz at the Metropole (Bethlehem, rec. May 1955), Charlie Mariano (Bethlehem, rec. June 1955) and Urbie Green’s Blues and Other Shades of Green (ABC-Paramount, rec. October 1955).

Here, RVG-Creed Taylor’s first listed collaboration is Jimmy Raney’s The Fourmost Guitars (ABC-Paramount), recorded not on May 4, 1955, as Malott reports, but on May 4, 1956. The first correct RVG-Taylor listing here is the October-November 1960 Winding/Johnson Impulse recording The Great Kai & J.J..

Creed Taylor, Part 2: Shortly after launching the Impulse label, producer Creed Taylor left to head up the MGM-owned Verve Records in 1961. While there, Taylor worked with a variety of engineers – often generically credited to “Director of Engineering – Val Valentin” – but he also worked often with RVG.

While several of Taylor’s earliest and better-known Verve productions recorded by RVG are included here (Jimmy Smith’s Bashin’ and Johnny Hodges’s Blue Hodge), quite a few are not.

These were the only ones I was willing to look for. I’m sure there are more.

A&M/CTI: Of the nearly three dozen titles RVG recorded for Creed Taylor’s A&M/CTI imprint between 1967 and 1970, only 10 are listed here: the two by Antonio Carlos Jobim, three by George Benson, two by Paul Desmond and the two by Quincy Jones (one not credited to Taylor).

Surprisingly listed here – given all else not going on in this text – are the first two independent CTI releases: Hubert Laws’s Crying Song and Kathy McCord’s eponymous disc.

CTI Records: RVG recorded the bulk of Creed Taylor’s output on the CTI, Kudu and Salvation labels – particularly in the label’s first decade. (Notably, I should add, using obviously different techniques than those that define his Blue Note and Prestige dates.)

While Malott lists a few of these discs – which he dismisses as “financially successful but not always well received by critics” – more than a few CTI sessions are missing here. Between 1970 and 1975, Malott omits no less than 45 CTI LPs.

Also missing are an additional 22 titles RVG recorded – in full or part, including overdub sessions – for the CTI label between 1977 (a year when RVG was supposedly contracted exclusively to CTI) and 1993. The only disc listed during this period is the 1982 Studio Trieste, credited to Chet Baker, Jim Hall and Hubert Laws.

My count doesn’t even include the many CTI titles mixed or mastered by RVG that were recorded at other studios during this period.

Muse/HighNote: There are 30 some titles RVG recorded for Joe Fields’s Muse Records between 1977 (when funds began drying up at CTI) and 1981 (when I stopped counting . . . and a year this book lists a measly two recordings) that are not included here. Again, this does not count any of the Muse titles mixed or mastered by RVG, recorded at other studios during this period.

In what is little better than an utter disregard for RVG’s later work, hardly any of RVG’s many Muse recordings (through 1994) are listed here. And only five of RVG’s many recordings for Fields’s later HighNote and Savant labels (from 1997 on) are here – all by pianist Cedar Walton.

Criss Cross Jazz: Between 1984 and 1991 – accounting for a mere twelve pages of text in Malott’s book – RVG recorded a series of discs for the Danish Criss Cross Jazz label. While several Criss Cross discs are listed here, there are 18 titles I counted that RVG recorded for such artists as Benny Green, Mike Ledonne, Brian Lynch, Ralph Moore, Jim Snidero and others not included.

Indeed, Malott devotes five more pages of text to RVG’s 1960 recordings than he does to all of RVG’s work between 1980 and 2011. There are less pages devoted to those later years – 27, in fact – than years themselves. (And why stop at 2011? Van Gelder worked actively up until his death, the year before this book was published.)

After all this, I gave up spot checking any of Malott’s Blue Note and Prestige listings. At first glance, though, they look mostly right and complete; to his credit, Malott even notes sessions that weren’t released until many years after their original recordings. But, again, this information was readily available elsewhere.

Another frustration of this book is that Malott notes session producers (mostly correctly, though he mistakenly credits Val Valentin as producer of Gary McFarland’s 1964 Soft Samba) and musicians – but no song titles recorded at those sessions. Granted, this would make for a much longer book.

But such an encyclopedia is the reason anyone would want to consult a book like this in the first place.

There is room in this world – and a need – for the complete recordings of Rudy Van Gelder. It might even take more than one volume to make such a meaningful case for the man Malott properly cites as the one “behind the magic of practically every major jazz recording.”

But that’s about all you get here: the notable and already well-noted major jazz recordings. This poorly sourced and presented book is anything but the “complete recordings of Rudy Van Gelder.”

Posted by Douglas Payne at 4:26 PM