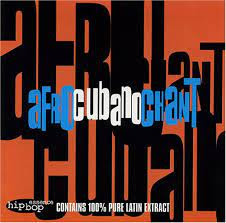 Back in the nineties – a phrase I never imagined writing – drummer and producer Lenny White with producer and author Milan Simich set about putting out a series of jazz “all-star” recordings. There were two on Atlantic – one nominally led by Charles Lloyd and another by Bobby Hutcherson (both wonderful) – several on their short-lived Hip Bop Essence label and one called Chartbusters on Mike Mainieri’s NYC label.

Jazz all-star records date back at least to Norman Granz’s Jazz at the Philharmonic records of the fifties. But White and Simich’s model likely owes itself to Creed Taylor’s CTI All Stars, a group which did summer tours for a few years in the early seventies. Several records resulted from these tours, including the monumental California Concert (1972) and three volumes of the 1972 Hollywood Bowl performances, issued in 1977.

White himself was part of a CTI all-star date, the starry yet underrated studio concoction Fuse One (recorded in 1980 and released in Japan that year, but not issued in the US until 1981). The drummer was also part of one of CTI’s earliest successes, Red Clay (1970) by Freddie Hubbard – the subject of Hip Bop Essence’s 1995 all-star tribute, Hub Art (notably with former CTI All Star and Red Clay bassist Ron Carter).

Recorded in September 1995, Afro Cubano Chant is one of White and Simich’s better “Essence All Stars” dates. It isn’t great, maybe not even all that memorable. But it is an absolutely pleasurable listen and one of the more inspired teamings of musicians the producers devised.

Perversely, the disc is neither credited to the Essence All Stars nor were any of the named players contracted with the (Hip Bop) Essence label. None of the contributing artists are listed on the disc’s cover, so you’d have to do some serious digging if you’re a fan of any of these guys.

But here you have saxophonist Gato Barbieri – who, for some reason, had not recorded for a full decade before this – surprisingly paired with smooth-jazz avatar and former CTI All Star Bob James, as well as the hugely underrated vibraphonist and aforementioned producer Mike Mainieri.

In addition to White on drums, Afro Cubana Chant offers up the mighty Fort Apache Band members Andy Gonzalez on bass and Steve Berrios on percussion – who both have brief CTI affiliations of their own: the former on Charles Fambrough’s The Proper Angle (1991) and the latter on George Benson’s The Other Side of Abbey Road (1970 – also with Bob James).

Lenny White had previously played with Gato Barbieri on the tenor saxophonist’s Fenix (1971) and the more popular crossover albums Caliente! (1976) and Ruby, Ruby (1977 – both of which featured many musicians associated with Bob James at the time). Speaking of James, White factored briefly on the keyboardist’s 1986 disc Obsession.

Additionally, White and Mainieri could be heard together on Norwegian pianist and guitarist Kenneth Sivertsen’s Remembering North (1993) as well as George Garzone’s Alone (1995) while White and Berrios went on to appear together on trumpeter Wallace Roney’s 1997 Village. 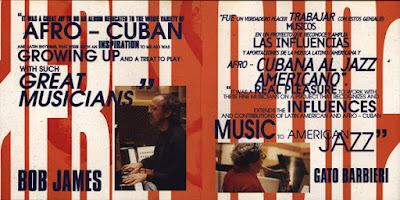 James, who, like White, had seemingly played with everyone by this point, had brief sojourns with Mainieri on the keyboardist’s 1978 album Heads and Steve Berrios on Mongo Santamaria’s Red Hot (1979 – both on James’s own Tappan Zee label).

Afro Cubano Chant is a solid mix of straight-ahead jazz classics and strong group originals set in a pleasing Latin mood that would make Cal Tjader and fans of the late vibist proud. It also marks the first time in decades that Bob James was heard exclusively on piano throughout. This one-off session likely inspired James’s choice to go briefly “straight ahead” on the fab trio-set Straight Up, recorded three months later in December 1995. One can only wonder how much more there was from these sessions.

Indeed, it is as a Bob James session that makes this disc most notable. But it is not James who either commands or dominates the proceedings – nor makes it that interesting.

Inevitably, it is Barbieri’s sax and Mainieri’s vibes that take the lead throughout and, frankly, give the set the energy it has – but not always at the same time. Together, they lead the charge on James’s “Last-Tango”-esque and somehow very James-ish “Mui Tarde Amor” (a piece that deserves much better notoriety in James’s catalog) and White’s interesting, but all-too-little-explored “Casablanca.”

Barbieri factors in his inimitable way on “Cubano Chant” and “Suave” while Mainieri serves up his bona fides on “Tanya” and his own “Los Dos Lorettas” – riffing off Horace Silver’s “Song for My Father” and later covered by the composer on his own An American Diary: The Dreamings and Pools as well as guitarist Kazumi Watanabe’s 2011 disc Lotus Night. 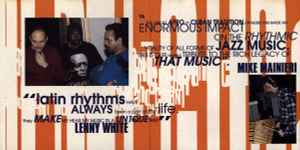 Ideally kicking off with Ray Bryant’s classic “Cubano Chant,” these all-stars already sound firmly in the pocket. The tune, originally written in 1955 for Cal Tjader, quickly became a staple in both Tjader and pianist Oscar Peterson’s repertoire and was covered by many including the George Shearing Quintet, Art Blakey’s Jazz Messengers and composer/pianist Ray Bryant himself.

Lonnie Hewitt’s wonderfully moody “Tanya” was also written for Tjader (the song appears on the vibist’s superlative 1965 Creed Taylor-produced album Soul Sauce) while the lush “Suave,” from bassist Santi DeBriano, who doesn’t appear here but recorded as part of Simich’s 1993 all-star grouping Grand Central, is a wonderful addition that sounds as though it could have come from his terrific 1993 album Panamaniacs.

All told, Afro Cubano Chant makes for great listening, even in the background.

While it’s a shame these guys never recorded together again, a second recording, billed as Afro Cubano Chant Two, was released in 2000, during the waning days of the Hip Bop Essence label. That set brings back only Gato Barbieri for his own “Habotan” and Bob James for a cover of Ernesto Lecuona’s “La Compasara” – neither one together and none with any of the other folks heard here.

There is also a CD recording featuring this exact same line-up titled Auberge du Soleil – Napa Valley California – Jazz on sale for rather outrageous amounts on Amazon and eBay, But it is, l suspect, nothing more than a repackaging of this exact recording.

Posted by Douglas Payne at 8:46 AM