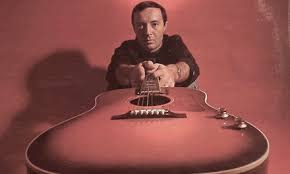 The Hungarian guitarist Gabor Szabo seemingly came out of nowhere in the early sixties and threatened to shake the staidness right out of jazz. His signature sound – an intoxicating jingle jangle of metal and melody – combined with a daring audacity to take on more contemporary material made Szabo a force to be reckoned with.

His albums Spellbinder (1966) and The Sorcerer (1967) not only perfectly described the enchanting Szabo experience but found great popularity and success. They also served as sources of inspiration for countless guitarists like Lee Ritenour and musicians as far-ranging as Madonna.

One of those he inspired, Santana, took Szabo’s “Gypsy Queen,” paired with Peter Green’s “Black Magic Woman,” to #4 on Billboard's Hot 100. Szabo continued recording sporadically throughout the seventies to ever lessening acclaim and attention. It is hard to imagine how quickly such a controversial figure, a firebrand really, could become an ember of his former self so quickly.

After several returns to his homeland, Szabo died in Hungary during a visit in 1982. He was only 45 years old. Although he waxed several records and continued intermittent performances in his final years, Szabo hadn’t had an American album release since 1977.

Several years later I discovered Gabor Szabo. Combing through used-record stores, I first found Jazz Raga, Spellbinder and Gary McFarland’s The In Sound – because I liked the covers. All three featured this guitarist with an exotic-sounding name. One listen to these records begged for many more. They were like puzzles, full of cunning allure and unsolved mysteries all worth solving. I got every Szabo record I could find. Gabor Szabo poured out of my speakers like a fountain of joy and bathed me in a certain musical regalia every time I listened. I’d never heard anything like this before. His was a sound I couldn’t get enough of and one I didn’t want to end.

But while I was riveted, no one seemed to know or care much about this iconic talent. Gabor Szabo, to my knowledge at the time, wasn’t heard or respected anywhere. He wasn’t on the radio. His records weren’t in any of the stores – and none were showing up on CD as so many other older jazz albums were. There were no books about Gabor Szabo and jazz histories and guitar anthologies at the time barely rated Szabo a mention.

For the next several years, I scoured libraries to find out who this guy was and where this unique music came from. I amassed enough information to do something about it – because there was still nothing readily available about Gabor Szabo, other than an oddly titled compilation, The Szabo Equation: Jazz/Mysticism/Exotica (1990).

By the early nineties, I decided to put what I learned in a book. I had a publisher agree to publish it, but at the dawn of the internet age, I thought to myself: why publish a book for a select few fans when an internet resource can introduce this iconoclastic artist to a whole new world of fans?

Gabor Szabo: Iconoclasm was launched on dougpayne.com in 1995 and was kept updated until a few years ago when discogs.com, allmusic.com, streaming services and, yes, even amazon.com – all mightier internet resources than mine – were better able to help other generations of listeners easily discover and enjoy the genius of Gabor Szabo.

Meanwhile, unknown to me, there already existed a book on Gabor Szabo! 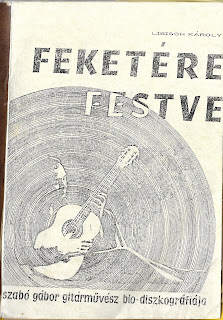 Back in 1995 I was alerted to this fascinating document by a lovely Hungarian man (in Turkey at the time) and huge Gabor Szabo fan, Sándor Fazekas, who was aligned with the great Hungarian jazz historian Géza Gábor Simon and the book’s author, Károly Libisch.

Much to my surprise, thankfulness and everlasting joy, Sándor gifted me with a first-edition copy of “Feketére Festve: Szabó Gábor gitárművész bio-diszkográfiája,” Károly Libisch’s comprehensive and lovingly compiled “bio-discography.” The 186-page softbound book appeared to be homemade. It was likely produced on an early word processor and mimeographed on paper whose sections are color-coated in canary, yellow, carrot, orange and tan pages.

”Feketére Festve,” which translates as “Painted Black” (a reference to Szabo’s cover of the Rolling Stones’ “Paint it Black” on the 1967 classic Jazz Raga), is a Hungarian-language study of the life of Gabor Szabo – whose name in Hungarian appears as Szabó Gábor (or “Gábor Szabó” in many contemporary online resources) – and his music.

The book, at that point, seven years in the making (putting the fuse of Kari’s study at about the same time of my discovery of Gabor Szabo), adds much to Szabo’s biography that had never been known before. Kari had been in touch with Gabor’s family, Hungarian associates and Marianne Almásy, Szabo’s partner, confidant and muse during his last years.

Original annotator Kornél Zipernovszky states Kari’s mission perfectly: “Guitar player Gábor Szabó was the first Hungarian jazz musician to achieve international fame, widespread popularity and critical acclaim abroad, and whose music is recognisable as being distinctively Hungarian. However he was little known, and never acknowledged as such in his own country.” Kari came to the rescue and made Gabor Szabo matter in his own country – and beyond. 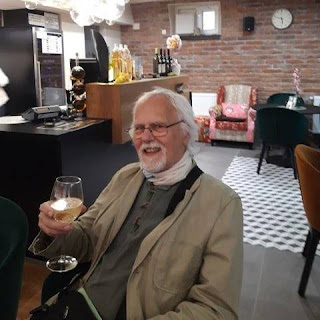 Strikingly, Kari first discovered Szabo through Santana. “In 1970, [Szabo] spoke several times on the Hungarian Radio about “Gypsy Queen” [as covered by] Santana,” he says. “Then I memorized Szabó’s name. As a record collector, I first came across Santana recordings, followed by Femme Fatale (1981). From then on, I started watching record stores.”

Kari’s journey – or obsession – seemed to match mine. We both came to Gabor Szabo by accident and fell in love with what we discovered. It was that love that underscored both of our documentations of Gabor Szabo’s life and art. 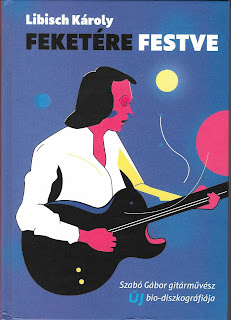 The Hungarian-language ”Feketére Festve” has been revised several times over the years but arrives in 2021 in surely its most definitive edition. The stunning hardbound book weighs in at a meaty 586 pages, replete with full-color reproductions of album covers, labels, inside sleeves and many images of Szabo, associates, friends and family. Even the cover sports a most attractive design by Daniel Huszár.

The book’s first section is a year-by-year biography of Szabo up until his death in 1982 (pp 12-63). This is followed by a lengthy discography of Szabo’s recordings from 1956 through 1981 (pp 64-349). The discography is broken down song by song, with analysis of each and every recording made on his own and with others.

Here, Kari excels not only in his understanding of Szabo’s talents but of the music itself. He is an undaunting commentator, unabashed in his affection for Szabo - whose best playing he describes as "bright" - yet unafraid to cite shortcomings along the way.

Take, for example, how he calls the guitarist’s solo on the “Spellbinder” (1966) “beautiful” atop the “monotonous rhythm accompaniment” or how he delights in the three-guitar sound of “Breezin” (1971), all of which, to him, amounts to little more than “pleasant cocktail music.” (All translations here are mine.)

Throughout, he offers especially keen insight. For instance, he considers Chico Hamilton’s “Conquistadoers” (1965) as Szabo’s first dive into the Latin Rock maelstrom where he so often thrived while noting “Femme Fatale” (1979) was to be titled “Mariann” but Ms. Almásy apparently declined the honor.

He astutely describes Szabo’s “buzzing/growling” vocal on “Walking on Nails” (1967) as “somewhat similar to the murmuring of Tibetan monks” and reveals that the intoxicating “Thirteen” (1972) is based on the Hungarian folk song “Under the Mountains of Csitár.”

Likewise, Kari suffers no fool or foul gladly. Take, for example, noting “Ken Miller’s crappy guitar playing” on “Baby Rattle Snake” (1976), a song which reminds him of “the aftermath of Herbie Hancock’s song ‘Watermelon Man.’” He also cites “Are You There?” (1967) as the only song worthy of a fan’s expectations on the Wind, Sky and Diamonds album: “Of course [our expectations are already pretty] low!”

“Feketére Festve” also includes thorough discographies for reissues, compilations, singles, other artists' covers and inspirations; a filmography; a bibliography; a comprehensive song index; Gabor’s equipment; a section on Szabo’s painting (which he considered his first love); and even a performance log.

Kari goes to great lengths throughout to chronicle not only Gabor Szabo’s recorded legacy but the man’s fight for freedom at every turn. “Szabó’s whole life can be an example,” Kari tells me. “His diligence, his talent, the harmfulness of drugs and Scientology, his unique style: they can all provide a lesson.”

”Feketére Festve” is a monumental achievement and a beautiful tribute to the life and art of Gabor Szabo. It is a treasure matched only by a few jazz biographies and discographies – and often those are restricted to jazz’s greatest and best-known practitioners. Károly Libisch hasn’t merely written the book on Gabor Szabo. He’s written the encyclopedia.

Kari is publishing “Feketére Festve” in small batches, based on orders. The cost of the book is HUF 12,000 (41 USD) plus postage to the USA, which is HUF 10,000 (34 USD). To purchase, contact Kari directly or via his Facebook page.

Doug - my profuse thanks and appreciation for this in depth review of Kari's accomplishment of the Herculean task of assembling the sequence of Gabor's life. Kari's set of facts are so complete and error free that I was able to recall certain sequences of my life that I had forgotten, both in Hungary and later in California.
You and I have not met directly but I followed the extensive correspondence between you and Barbara in the mid and late 90-s, when you were assembling dougpayne.com. Barb, who sadly fell victim to cancer in 2007, would approve as much and more to all your support and enthusiasm for Gabor.
With many thanks - John