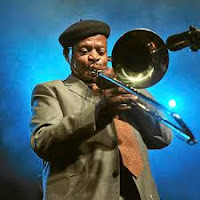 Tuning into Seton Hawkins’s South African Jazz show on SiriusXM’s Real Jazz on Monday, I was saddened to learn that the great trombonist and composer Jonas Mosa Gwangwa passed away on January 23. He was 83. According to the BBC, the cause of death was cardiac complications.

While not as well-known as he deserves to be, Gwangwa was a fantastic songwriter who contributed a number of memorable songs to the legacies of Harry Belafonte, Miriam Makeba and Hugh Masekela – and one of the best trombonists who ever played the instrument.

He was never as well recorded or regarded as such compatriots as Makeba or Masekela or even Dollar Brand (Abdullah Ibrahim) or Letta Mbulu – all of whom he worked with. And he never got his due on trombone as Americans J.J. Johnson, Kai Winding or Steve Turre.

Gwangwa got his start in the pioneering South African jazz band the Jazz Epistles, which also featured Dollar Brand, Hugh Masekela and Kippie Moeketsi. The musical King Kong (1960) helped Gwangwa get out of South Africa during the reign of Apartheid and he eventually found his way to the United States. There, he was able to hook up with such ex-pats as Miriam Makeba and Hugh Masekela.

Thanks to these connections, Gwangwa contributed “Kwedini,” to The World of Miriam Makeba (1963), arranged, adapted and conducted the great 1965 album An Evening with Belafonte/Makeba (featuring his incredibly beautiful “Show Me the Way, My Brother”) and (amazingly) “Going to Grandma’s House” for Les and Larry Elgart’s Sound of the Times (1966).

During this period, he also participated in the December 15, 1965, concert “The Sound of Africa 1965” at New York’s Carnegie Hall, presented by Harry Belafonte and headlining Miriam Makeba, Hugh Masekela and Letta Mbulu, benefitting the African American Institute.

As a player, he also appeared on Makeba’s Makeba Sings! (1965) and Hugh Masekela’s tremendous Grrr (1966), the latter of which includes Gwangwa’s marvelous “Kwa Blaney.” Gwangwa likely appeared on other dates, without credit, but it’s hard to know if that's true and even harder to determine how difficult his life here was at the time.

In 1966, Gwangwa co-wrote (with producer Stewart Levine) the single “Walkin’ Around,” the debut single for Letta (Mbulu) and the Safaris, a group that also featured his wife at the time, Mamsie. As good as it was, even with the backing of a major label (Columbia), the single failed to chart. 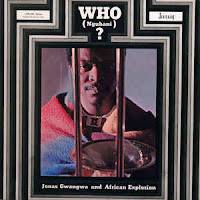 The following year, Gwangwa issued a full-fledged album of his own on Ahmad Jamal’s short-lived Jamal label, Who (Ngubani)?. The album, featuring Mamsie and South African saxophonist Dudu Pukwana, is a tremendous example of his potential. Yet hardly anyone even knew about it.

Songs like “Switch #2” and the album’s “Grazing in the Grass” copycat single “African Sausage” make the album worth hearing. But the record’s glorious “Dark City” makes it something worth having: Gwangwa is and was an incredible purveyor of his country’s music and one whose compositions consistently demand attention and affection. 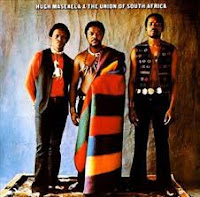 In 1971, Jonas Gwangwa and Caiphus Semenya partnered with Hugh Masekela for the short-lived Hugh Masekela & the Union of South Africa. The group’s sole album – among the best fusions of South African Jazz and American R&B at the time – is Gwangwa’s highest-profile gig.

That same year Gwangwa co-edited the music book The World of African Song, credited to Miriam Makeba. The book presents the music and lyrics to a selection of traditional South African tunes Makeba recorded on six of her earliest RCA and Kapp albums.

Confoundingly, while Gwangwa’s star never ascended in America the way Makeba or Masekela’s did, it seems his opportunities – or options – were few. He appeared on two songs on Robin Kenyatta’s 1973 album Terra Nova and five years later for the aforementioned Main Event Live. Two Gwangwa singles (“Yeba” and “African Butterfly”) were issued on small labels in the late seventies, but seemingly nothing else under his name appeared.

By the eighties, Gwangwa assumed duties as musical-director for an African vocal group called Amandla that issued four albums on a curiously Russian-oriented label. By 1987, Gwangwa, along with George Fenton, contributed to Richard Attenborough’s acclaimed film Cry, Freedom, about the meeting of journalist Donald Woods (Kevin Kline) with activist Stephen Biko (Denzil Washington). The film was nominated for three Academy awards, including Best Musical Score and Best Song. 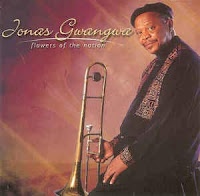 Gwangwa contributed lackluster solos to an odd 1988 remix of the Special AKA’s “Free Nelson Mandela.” But by 1991, Jonas Gwangwa made it back home to Johannesburg, where he later recorded three albums that showcased his ingenuity and allegiance to South African jazz: the terrific Flowers of the Nation (1990 – recorded in London), Sounds from Exile and A Temporary Inconvenience (1999).

Why nothing else came is unknown – or, perhaps, unknown to me. Jonas Gwangwa was very active on the music scene in South Africa in his later years, but he never attained the recognition or stature here, or anywhere else, he so richly deserved.

Jonas Gwangwa died in Johannesburg, but lives on in so many of jubilant recordings and compositions he left to us to revere and enjoy.