Delvon Lamarr Organ Trio “I Told You So” 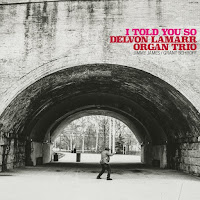 What’d he say? This, from delvonlamarrorgantrio.com:

Delvon Lamarr Organ Trio—or as it is sometimes referred to, DLO3—specialize in the lost art of “feel good music.” The ingredients of this intoxicating cocktail include a big helping of the 1960s organ jazz stylings of Jimmy Smith and Baby Face Willette; a pinch of the snappy soul strut of Booker T. & The M.G.’s and The Meters; and sprinkles Motown, Stax Records, blues, and cosmic Jimi Hendrix-style guitar.

To this list of influencers, you could also add Trudy Pitts, Odell Brown and the Organizers, Leon Spencer, Sue-era Jimmy McGriff and the J.B.’s, as well as the more recent Danish trio Ibrahim Electric.

There simply aren’t that many organ combos left out there anymore. The electrification of other keyboards – pianos and synthesizers – really pushed the organ out of favor in the late sixties. What Jimmy Smith did for the acceptance of jazz organ left everyone hearing Bill Doggett honky-tonking or Dave “Baby” Cortez rinky-dinking at some point in time.

From Larry Young onward, dedicated purveyors of the demanding Hammond B-3 seemed to go out of their way to sieve the grease out of the meat and make the organ more subtle, more serious and, well, more negligible. The others plied their trade till they met their maker – and most, now, are gone.

So when an organ combo like the DLO3 come along, boldly reclaiming its funky roots, you had me at “I told you so,” despite my initial and regrettable pass on 2018’s ironically-titled Close but No Cigar.

This Seattle-based trio winningly sticks to the basics, with Delvon Lamarr (Dumas) on organ, Jimmy James (Williams – you need to know these names for the songwriting credits) on guitar and Grant Schroff on drums. Seattle-based funk guitarist Ben Bloom (from the Polyrhythmics, also featuring DLO3 drummer Grant Schroff) gets a rather too brief guest shot on “Right Place, Right Time.”

They weigh in on a set of mainly originals that speak to a time possibly two generations before their own and declare its relevance in this no-fun age of lockdowns, social distancing, viral extremism and scary politics.

Delvon Lamarr is a terrific stylist who sautés all his aforementioned influences – with a dash of Bernie Worrell – into one exceptionally funk-tional devotee of great organ groove.

His compositions have the funky flair that blend the standard-bearing with the barrier-breaking. I hear the Argo-era of the woefully under-appreciated “Baby Face” Willette, but suspect others will hear any number of Lamarr’s other influences as well. His solos are as notably inventive as they are laced with any number of crowd-pleasing highs (DLO3 is at its best live) – and all suit the mood this trio is aiming for.

Of all the players, though, it is Jimmy James who cuts the widest swath. He coaxes a galaxy of sounds out of his guitar: from the gut-bucket and fuzzy to the spacey and lyrical, reminding this listener in many ways of the late, great Eddie Hazel, particularly in those heady early Funkadelic days.

James seems to lead the trio as much, if not more than, Lamarr. It is in his solos where he consistently commands the most attention – not necessarily for dazzling proficiency but, rather, pitch-perfect adherence to the groove and a spot-on, if not altogether uncanny, sense of a tune’s modality.

Only the bright and snappy recording reveals this 2021 disc as something “new.” The moves and the grooves are old-fashioned and fun, the way this sort of music used to be. In a blindfold test, you’d be hard pressed to believe any of this music was captured after 1969.

I Told You So is the DLO3’s third album for the Cincinnati-based Colemine Records and it’s a real joy. Clocking in at a breezy forty-one minutes, it has the vibe an old LP and despite its studio trappings, sounds and feels like an intimate and animated club date – with none of the phony audience sounds grafted onto those Ramsey Lewis or Cannonball Adderley studio records of yore.

The disc kicks off with “Hole in One,” perhaps a reference to the renown the DLO3 has achieved since they first came together in 2015. The wordplay may also suggest the palpable synergy the trio shares, a “whole in one.” This classic Chicago soul is straight out of the far too little-known Odell Brown playbook and is absolutely worth being revived.

“Call Your Mom” follows on, confirming this trio’s affinity to both Booker T. & the M.G.’s and The Meters: Memphis meets New Orleans. Could “Mom” be “M.G.’s or Meters”? Me thinks so.

The dark “From the Streets” grinds like of one of Isaac Hayes’s Blaxploitation film themes; just the sort of thing Angelo Badalamenti would recycle for the spookier scenes in his David Lynch film scores.

”Fo Sho,” released on 45 in 2020 (Colemine specializes in soulful singles), is the disc’s dominant and most appealing track. Deeply informed by the rock organ of Santana’s Gregg Rolie, Deep Purple’s Jon Lord or Traffic’s Steve Winwood, “Fo Sho” presents Lamarr and James at their psychedelic best, infusing their roiling rock with edgy jazz and trippy soul.

Covering George Michael’s 1984 hit “Careless Whisper” is a shrewd move. The original had a terrific melody and a sensibility that lent itself well to jazz. While the song is a natural for its many smooth-jazz covers, the DLO3 give it a backbone that Charles Earland might have done back in the day (surprisingly, he did not). The trio injects a grit and gristle that Earland would have likely never attempted, but James caresses the song’s familiar alto sax wail, while offering a tasty solo all his own.

A personal favorite here is the album’s closer, “I Don’t Know.” Perhaps that’s because it’s the closest thing the DLO3 come to claiming a personal anthem. Listen to Lamarr work those pedals – there’s no letting go.

Indeed, they do know – and they want you to know, too. If these guys made album after album of “I Don’t Know” variations, I do know that I would continue investing in them. Seems to me this is the group’s set closer from now on.

Kudos, finally, to Leroi Conroy for his beautiful photography and the marvelously distinctive design for the I Told You So package.

Conroy mixes Blue Note’s iconic Reid Miles artistry with Columbia’s John Berg’s classicism, to come up with a new standard that’s as attractive and appropriate as it is timely and timeless. Like the old days, Conroy’s cover convinced me I had to hear this record – something I do not regret.

Conroy has also recorded several notable singles of his own for the Colemine label, including the marvelous “Remember When?” (b/w “La Gran Mesa”) (2014) and the Daptone-like “Tiger Trot” (b/w “Enter”) (2017) – all worth your attention if you dig the DLO3.

You have to admire these guys. They know their history and they lean in to it to forge their own. I love this disc and hope more music – and news – like this can come out of 2021. They told us so. Are we ready to hear what they have to say? Yes.

Posted by Douglas Payne at 8:37 PM